Why 2017 Could See the Collapse of the Euro 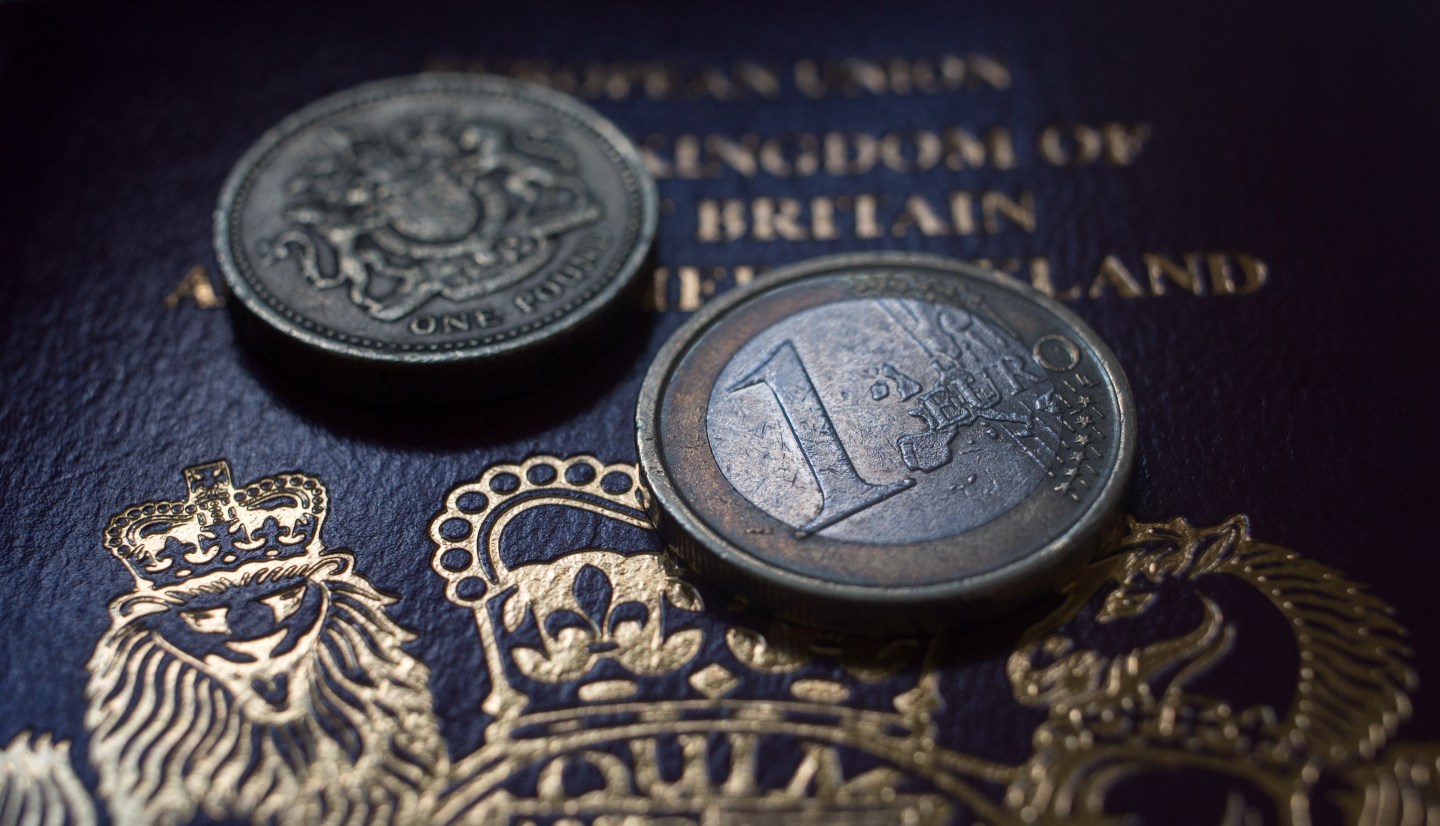 BATH, ENGLAND - OCTOBER 10: In this photo illustration, a Euro coin and a one pound sterling coin are seen on top of a UK passport on October 10, 2016 in Bath, England. Since the UK voted to leave the European Union in June, the UK's currency has been fluctuating in value against other currencies, including the Euro and the dollar, and looks likely to remain doing so while the uncertainty remains surrounding the terms of the UK's departure from the EU. (Photo by Matt Cardy/Getty Images)
Matt Cardy—Getty Images

Europe has not been doing well. Just this year, GDP per capita for the Eurozone as a whole finally returned to pre-crisis levels. It is claiming victory in Spain—even though unemployment remains near 20% and youth unemployment is more than twice that—simply because things are better today than they have been since the euro crisis began a half decade ago. Greece remains in a severe depression. Growth for the Eurozone over the past year has been an anemic 1.6%, and that number is twice the average growth rate from 2005 to 2015. Historians are already speaking of the Eurozone’s lost decade, and it’s possible they’ll soon be writing about its last decade, too.

The euro was introduced in 2002, but the cracks in the single currency arrangement, which began in 1999, became evident with the 2008 global financial crisis. Economists had predicted that the test of the euro would occur when the region faced a shock, and Europe was unlucky in facing such a big shock coming from across the Atlantic so soon after its creation. By 2010, the euro crisis had become full blown, with interest rates on the sovereign debt of the “periphery”—Greece, Spain, Ireland, and Portugal—soaring to unheard-of levels. But a closer look at the Eurozone shows imbalances building up from the very beginning—with money rushing into the periphery countries in the misguided belief that eliminating exchange rate risk had somehow eliminated all risk.

This illustrates one of the key flaws in the construction of the Eurozone: It was based on the belief that if only government didn’t mess things up—if it kept deficits below 3% of GDP, debt below 60% of GDP, and inflation below 2% per annum—the market would ensure growth and stability. Those numbers, and the underlying ideas, had no basis in either theory or evidence. Ireland and Spain, two of the worst afflicted countries, actually had surpluses before the crisis. The crisis caused their deficits and debt, not the other way around.

The hope was that fiscal and monetary discipline would result in convergence, enabling the single-currency system to work even better. Instead, there has been divergence, with the rich countries getting richer and the poor getting poorer, and within countries, the rich getting richer and the poor getting poorer. But it was the very structure of the Eurozone that predictably led to this. The single market, for instance, made it easy for money to leave the banks of the weaker countries, forcing these banks to contract lending, weakening the weak further.

Economists assessing the prospects of a single currency arrangement some quarter century ago emphasized the importance of sufficient labor mobility and an adequately large common budget to buffer against shocks as well as sufficient economic similarity among the countries. But the euro took away two of the critical instruments for adjustment—the exchange and interest rates—and didn’t put anything in their place. There was no common deposit insurance, no common way of resolving problems in the banking sector, and no common unemployment insurance scheme.

Equally important, these early discussions ignored the importance of intellectual convergence: There is a huge gap in perceptions of what makes for good policies, especially between Germany and much of the rest of Europe. These differences are longstanding. They were evident to me when I chaired the Economic Policy Committee of the OECD in the mid-1990s. If anything, there has been divergence here, too. Thus, the austerity policy—which Germany thought should have brought a quick return to growth—has failed miserably in virtually every country in which it has been tried. The consequences were predictable, and predicted by most serious economists around the world. So too, many of the particular structural reforms have actually weakened the countries on which they have been imposed, lowering growth and increasing their trade deficits.

A huge democratic deficit has since opened up: citizens in Greece, Spain, and Portugal have all voted in large numbers for parties opposed to austerity. Yet, they have felt they have no choice but to accept the demands of Germany. Citizens were never told that when they joined the euro, they would be giving up their economic sovereignty.

The ambition of the euro was to bring greater prosperity to Europe. This, in turn, would promote economic and political integration. The euro was a political project, but the politics weren’t strong enough to create the institutional arrangements that would ensure success. With the euro leading to stagnation and worse, it is no surprise that it has led to increasing divisiveness rather than to more solidarity. Today, it seems that the euro, which was supposed to be a means to an end, has become an end in itself—the pursuit of which poses perhaps the single most important threat to the European project.

In response to the repeated crises, Europe has made reforms, but they have been too little, too late. Some may actually be counterproductive: Having a system of common supervision, without adequate sensitivity to local macro-conditions and without common deposit insurance may actually exacerbate divergence. Meanwhile, the region has the misfortune of being repeatedly bombarded with crises, especially the refugee crisis. With unemployment in so many countries so high—at least partly because of the euro—those seeking a new future wish to move to where there are jobs, resulting in a few countries bearing the brunt of the wave of migrants. And naturally, countries where unemployment is high resist having new workers competing for the scarce jobs.

Europe has been engaged in brinkmanship, but the danger of brinkmanship is that there is a high probability that eventually one goes over the brink. Markets sense that the system is not viable in the long run—speculators attack when they smell blood. European Central Bank President Mario Draghi’s assertion that he will do “whatever it takes” has worked wonders—for longer than anyone expected. But it is a confidence trick: It works only because market participants believe it will work.

These market forces are intertwined with politics. Voters who should be unhappy—simply because they have done so poorly for such a long time—have expressed their anger by voting against the centrist parties of the left and right. The dissidents are in the ascendancy.

Perhaps European leaders, sensing the urgency of the moment, will finally make the reforms in the structure of the Eurozone that will enable a single currency arrangement to work—to achieve a shared prosperity. Perhaps 2017 will be the year in which the reform of the Eurozone really takes hold.

In order for a single currency system to work, there has to be more Europe—more solidarity; more willingness of the stronger countries to help the weaker; more willingness to create institutions like a common deposit insurance and a common unemployment scheme—than the current halfway house, which is simply not viable. But the failures of the Eurozone make such reforms increasingly hard. It is at least as likely that the political forces are going in the other direction, and if that is the case, it may be only a matter of time before Europe looks back on the euro as an interesting, well-intentioned experiment that failed—at great cost to the citizens of Europe and their democracies.

Joseph E. Stiglitz is a professor at Columbia University, recipient of the Nobel Memorial Prize in Economics, 2001, and most recently, author of The Euro: How a Common Currency Threatens the Future of Europe, W.W. Norton, 2016.