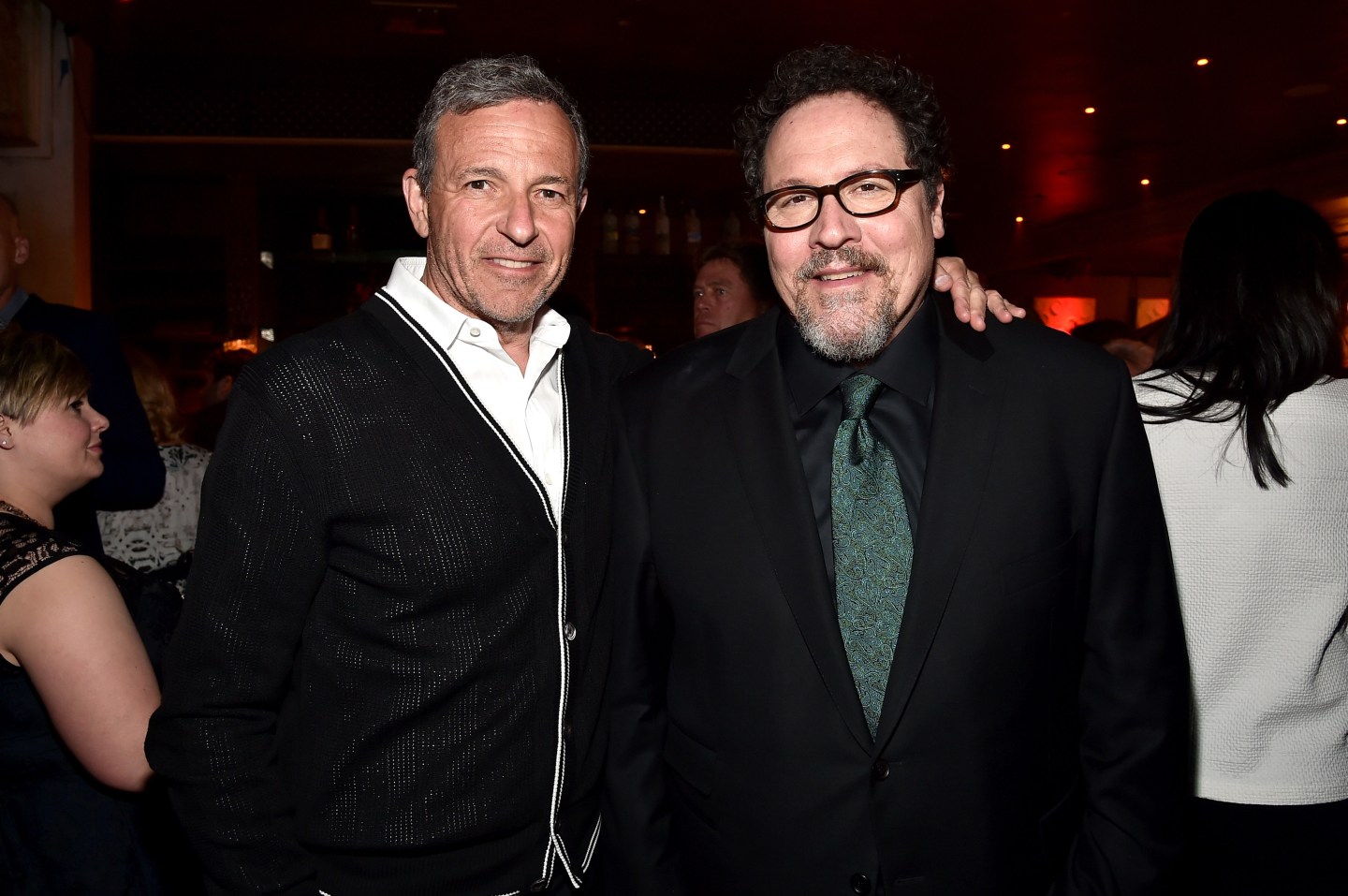 You know Jon Favreau. He’s the mopey smart aleck in the 1996 cult classic Swingers, the immobile ultimate-fighter boyfriend in the long-running television series Friends, the barfly buddy in the 2006 flick The Break-Up. In other words, he’s an actor with an instantly recognizable mug.

But you might not know that Favreau spends most of his time these days behind the camera. As a director, Favreau has generated billions of dollars at the box office for The Walt Disney Company by directing Iron Man and Iron Man 2 and producing Iron Man 3 (not to mention every Avengers movie). He recently helmed the production of the live action film The Jungle Book, which earned some $966 million at the global box office and is the fourth highest-grossing movie of the year, and is currently working on another Disney live action remake: The Lion King, still the highest-grossing animated film of all time.

It’s safe to say that Favreau has a lot of momentum in Hollywood—which is why it’s so important that he’s diving deep into the still-nascent world of virtual reality. The director has partnered with technology startup Wevr to create Gnomes and Goblins, an interactive fantasy world filled with tiny creatures that interact with a person wearing HTC’s Vive VR headset. Today, the game is available as a free interactive demo; the full experience is expected in late 2017.

Fortune recently spoke with Favreau, who explained how virtual reality technology came to captivate him and how it’s different than traditional filmmaking.

Why did you decide to get involved in virtual reality?

I tried an experience using the Vive called TheBlu. It was my first time really experiencing what they call “presence.” Through a combination of technical characteristics of the VR experience—things like low latency and resolution and tracking—it leads to an experience where your brain is fooled into believing this experience is something real, even though your prefrontal cortex knows rationally that it’s not. Parts of your brain are won over by how realistic things feel. You get a transcendent feeling. To me, that showed the potential of the technology, even though it’s only in its very early phases.

Virtual reality introduces a kind of “leap” to the storytelling process. How does it compare to technological leaps the entertainment industry has seen in the past?

In one aspect it mirrors the early days of technologies like film. In its early phases, film was a novelty. With VR, it’s almost like we’re still in the nickelodeon phase. It’s a bit of a novelty; it’s still overwhelming. People don’t really understand it, but they react very strongly to it. So we’re really at the very early part of the learning curve. It’s such a unique technology—you can’t just cut and paste other techniques onto it. You can’t just treat it like a film that surrounds you. That approach doesn’t take full advantage of what VR has to offer.

For a long time in Hollywood, the buzzword was “convergence”—games and movies merging to somehow become one medium. Does virtual reality actually achieve this?

It’s a different category. The techniques being used in VR definitely borrow from both games and movies. Because some of the experiences made for VR are done with film-based equipment and others use game engines, you’re feeling a confluence of the two technologies. But I think that the VR medium is distinct. There is a range of experiences—on one end, they’re very film-like; on the other end, they’re very game-like. But there’s a whole patch between the two ends where you can explore other aspects of storytelling that are mutually exclusive to both.

What are some of the lessons you’ve learned exploring VR as a medium? The audience often has more control over the experience versus traditional film.

With film, just because you have control over where the audience is looking, and for how long, doesn’t mean that you can do whatever you want. In fact, whenever you’re in the editing room, a point of discussion is often: What does the audience want to look at at this point? And that dictates the ending rhythm of the scene. If you don’t show them what they want to look at, they’ll become frustrated with the film. They won’t understand why, but subconsciously it could create tremendous tension in the audience by not showing them what they’re curious to see.

Horror movies often play with that tension. So when you’re doing comedy or an action sequence especially, you’re trying to develop a visual rhythm based on where people would really look if they had agency to look where they wanted to. And that informs VR to some extent because you have to know what they’re probably going to look at. So even though it feels like complete free will in VR, it often isn’t manipulated as much as it is in a linear film.

Let’s talk about Gnomes and Goblins. People already have access to a demo of the game. As you dig deeper into VR, is that feedback impacting how you’re thinking about the technology?

We didn’t want the experience to feel like a game. We wanted everything to be intuitive. We didn’t want to have text bubbles instructing people what to do. We wanted somebody who wasn’t a gamer to be able to just throw on the HMD [head-mounted display] and lift the hand controllers and, once they learn how to interact with the world, freely explore. We felt that the naturalism of that experience would feel more like a simulation than a game, and that people would be accepting of it even though it didn’t feel like other VR games or other games. Other VR games tend to have their roots in 2-D gaming and console gaming. We kind of took a leap of faith. The reaction to it has been so strong that we feel that we can continue to explore that area. We didn’t have to back off of our initial goal and vision.