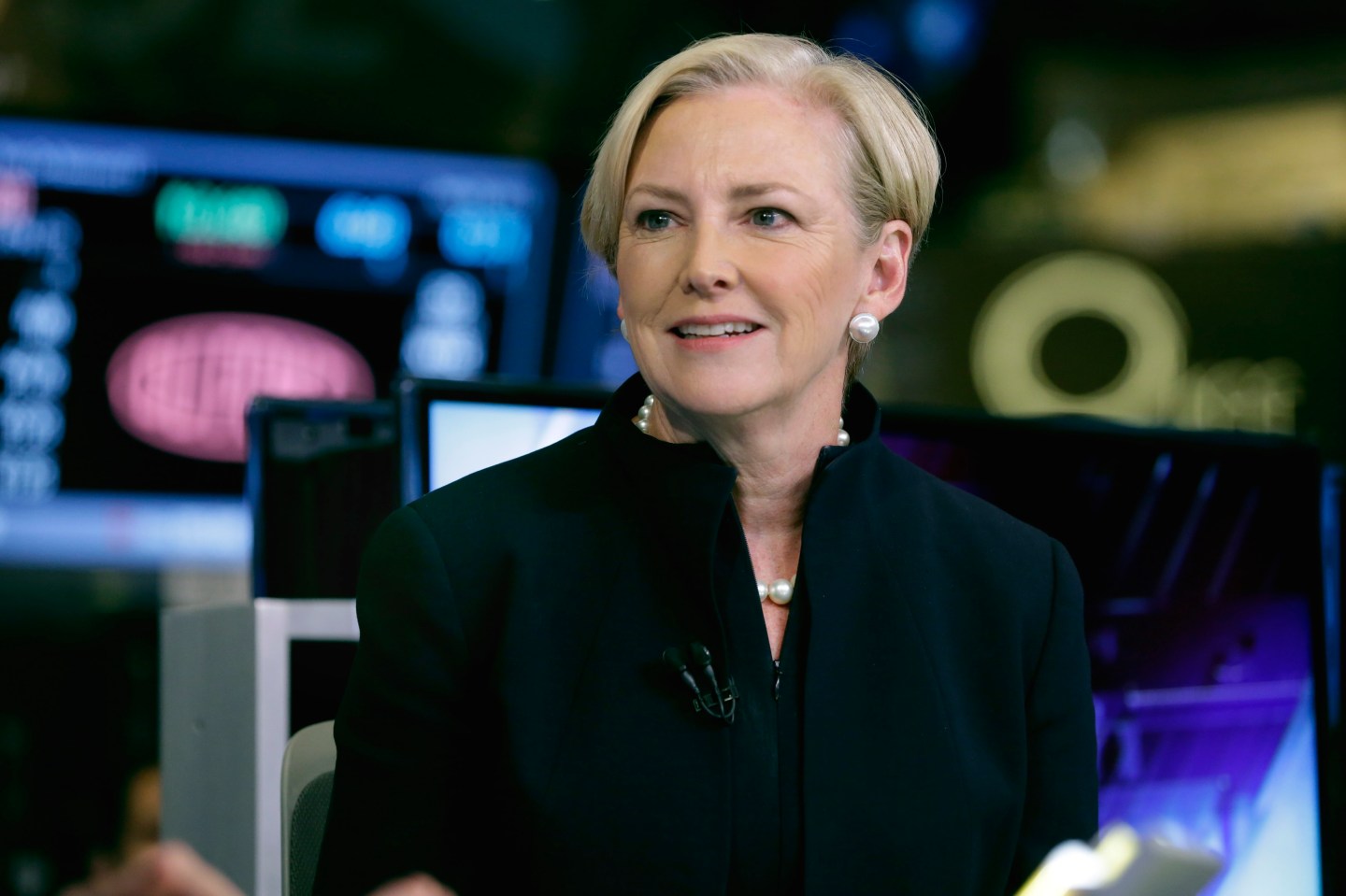 Don’t call it a comeback.

Most observers likely know Ellen Kullman from her six-year tenure as CEO of DuPont. After all, her name was a fixture in the business headlines in 2015, when she was embroiled in a bruising battle with activist investor Nelson Peltz. While she eventually won that fight, Kullman says she knew she’d become a target and that she “was getting in the way of the future of the company.” She stepped down in October of last year, largely vanishing from the public eye.

For those who admire Kullman—and who were saddened to see the departure of one of the few female CEOs of a Fortune 500 company—her reemergence as the co-chair of the Paradigm for Parity is a welcome development. The group is a coalition of 28 CEOs and founders who are coming together to push for gender equality at the top of major corporations by 2030. While the organization is certainly not the first to take a public stand on the issue, this pledge is notable for its specificity—it lays out five actions that all CEOs who sign on must agree to implement:

Fortune sat down with Kullman to talk about how she got involved in the Paradigm for Parity, how her own experiences as a woman in corporate America shaped the pledge, and whether she believes we’ll ever see 250 female CEOs in the Fortune 500.

Fortune: Where did the Paradigm for Parity idea come from?

Ellen Kullman: It was really the brainchild of [Evercore Wealth Management partner] Jewelle Bickford. She contacted me and she said, ‘Are you willing to spend two and a half days—we’ll do it over a weekend so you’re not going to lose time for work—and really spend time on this.’ We’ll work through why [women aren’t rising to the top in equal numbers], what’s causing it, and can we do something different from what’s out there now. In the first two and a half days—this was June 2015—we started working on it in small groups and we got momentum and found that what was missing was an action plan: actionable steps that companies can take to make a difference.

What kind of insights came out of that initial gathering?

At DuPont, we were doing unconscious bias training, but we didn’t do formal sponsorship. I thought: That’s interesting—why aren’t we doing sponsorship? And some of the measurements that people were doing were very different from what I was doing in my job. [Those types of realizations created a] lot of energy around creating the five points and the measurement system.

When we started talking to companies about signing on, we found that they were already doing many of these things—or some of these things—but not all of them. We really felt that we needed to get some momentum by getting at least 25 companies signed up, so from summer until now we’ve been working on that. Its been like church work; it’s all volunteer work, we paid for anything we need to pay for out of our own pockets because we believe that there’s something here that can make a difference.

Among companies you approached, but that opted not to sign on, what types of hesitations did you encounter?

In one case they were struggling with whether they could really do the sponsorship piece. They said, ‘We’re not saying no forever, we just want to take time and really understand what it would take to get a real sponsorship program, because we don’t want to just give it lip service, we want to be committed.’

What aspects of what you did at DuPont made it into the pledge?

We were doing unconscious bias training all the way up through the top of the house. My leadership team went through the training together. At first, my team looked at me and said, ‘I’m not biased.’ I said, ‘I’m not either, so lets just do it together.’ Then we found out that maybe that wasn’t quite true. It makes you vulnerable. You have to open up to things and you have to admit to things that you intellectually don’t believe.

Also, we did part of the metrics package, but not all of it. We would look at the last quarter to see how many people did we promote—men, women, in managers, in directors, in vice presidents—but we never took a three year look back. We could sit there in the room and explain the quarter, but when you look at a trend analysis sometimes it’s a lot harder to explain the trend if its not what you think it should be.

You said there was no formal sponsorship program at DuPont, but that it did happen on an ad hoc basis. Have sponsors helped you in your own career?

In the middle ’90s I had been working for a man for three or four years and he was a great mentor—he would hold the mirror up and help me understand my strengths, my weaknesses, and how I needed to develop. What I didn’t know until later was that he was also an advocate for me in a room where different roles were talked about. I was the first woman chosen to lead a P&L at DuPont at the VP level back in 1995, when I was 39 years old. One of the reasons that they ‘took a risk’ on me was because of his sponsorship. The bosses I had before him were good mentors, but they weren’t sponsors—and there’s a big difference. When you’re a sponsor, you’re not just telling someone what they need to do to improve, you’re helping that person achieve by giving them the opportunity.

One other aspect of the Paradigm requires companies to ensure that they’re evaluating employees based on their contributions to the company—not on time spent in the office. Has that come into play in your experience?

I think that’s one of the harder ones. People are very comfortable with face time. I see you, therefore you must be working hard. When I became the first woman to lead a P&L, my boss was in Japan so we didn’t have a lot of face time. So we did video conferencing at night after my kids went to bed, because that was convenient for me and it was convenient for him.

He and I had that discussion a lot: ‘I can’t see what you do every day, so how do i measure you?’ We would get into dialogues that were very different from what I had with my last boss, who was sitting in the next building. We just approached conversations around performance in a much deeper way because he wasn’t making assumptions. I think it actually connects with unconscious bias training, because a lot of bias comes from assumptions you make about people based on external factors—and one of those externals is face time.

So now you’ve revealed the program—what will you do to make sure it’s actually having an effect?

We’re working on that. After we made the announcement, I was with Jewelle Bickford up here in New York and I said, ‘Now the real work begins—you realize the dog has just caught the bus.’ So we have to continue to engage companies and get more to sign up, and more importantly, we have to think about how we’re going to show the progress we’re making—or not. That’s the work that we’re embarking on and will hopefully complete by the end of the first quarter.

You were one of just a handful of female Fortune 500 CEOs. Right now, the total stands at 24. You’re pledge aims for parity in 2030—do you think that means we’ll eventually see 250?

Wouldn’t that be great? It’s an aspiration and a vision. We put it out there for 2030 so it’s not a near-term goal, but we want to make progress every year. If we’re not filling the pipeline, then we’ll never get there. That’s why we talk about it at all levels of leadership. If women are entering the workforce at an equal rate as men, then you get to managers and they’re down to 24% or 22% then when you get up to the c-suite it’s like 19%. It’s just not a top of the house issue; it’s a pipeline issue.

When i was a young woman entering the workforce, I really thought we would have more progress by now. But that happens—one step forward, half step back. You have to keep the focus on what’s going to make a difference.