Why Unemployment Will Keep Dropping in 2017 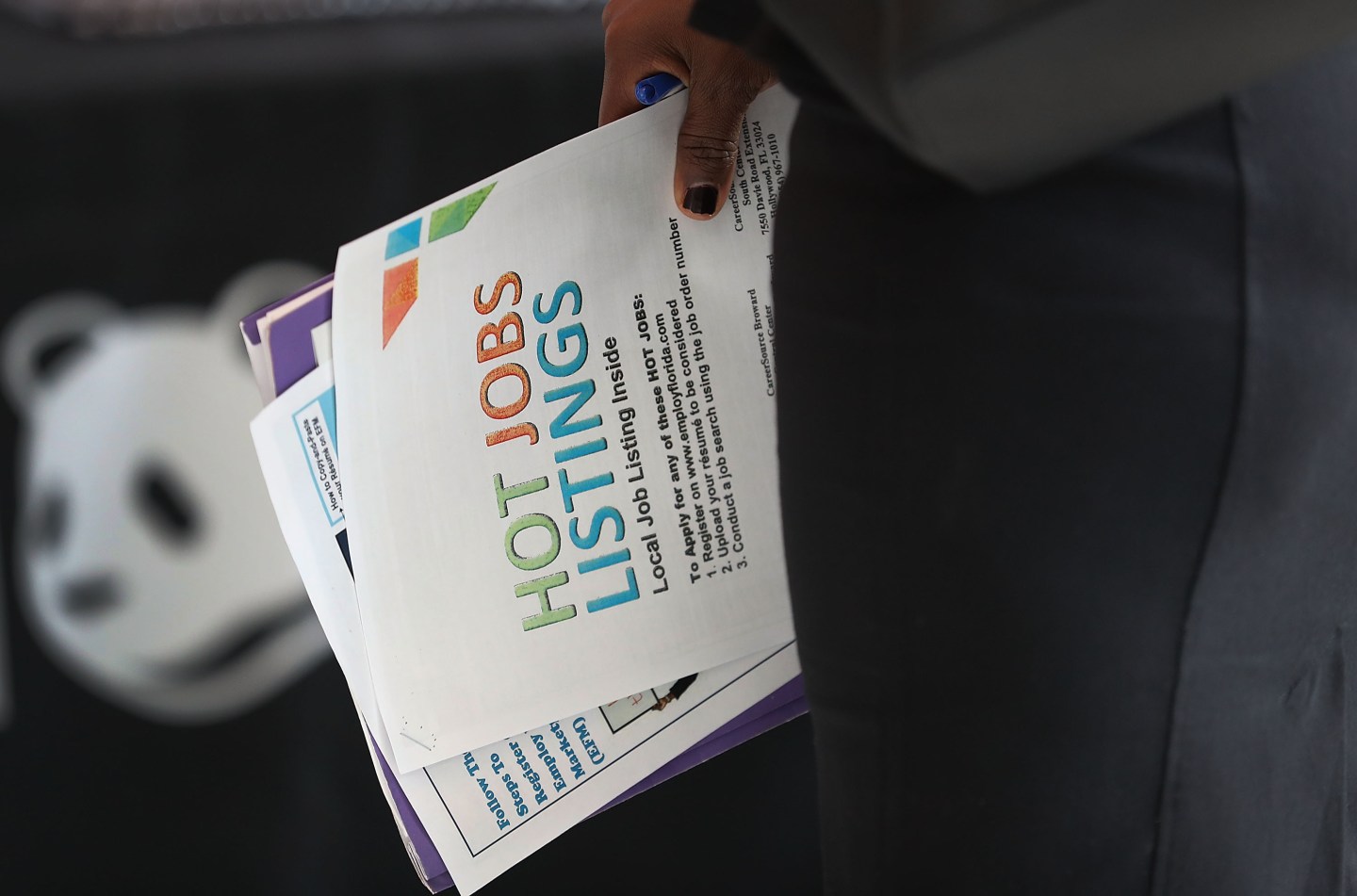 SUNRISE, FL - NOVEMBER 15: A woman holds a pamphlet announcing hot jobs listings during the JobNewsUSA job fair at the BB&T Center on November 15, 2016 in Sunrise, Florida. Over 30 companies were looking to fill approximately 2000 positions at the job fair. (Photo by Joe Raedle/Getty Images)
Joe Raedle—Getty Images

The economy has been steadily recovering from the 2007­–08 Great Recession and is expected to continue heading toward full employment in the next year or two. Many signs suggest that we are not there yet—notably below-target wage growth and still-depressed labor force participation. The prime-age labor force participation rate—the share of the population 25–54 years old that is either working or looking for work—remains 1.7 percentage points below its pre-recession level.

Unfortunately, the return to a full employment economy—one where additional demand in the economy will not create more employment—has been slower than necessary, as it faces an uphill battle against the relentless pursuit of austerity at all levels of government. But if the economy continues growing anywhere near its current rate of about 175,000 to 200,000 additional jobs per month, the labor market in 2017 will absorb new and returning workers and the unemployment rate could easily get below 4.5% for the year.

Over the last several years, the unemployment rate has seen a steady fall from a high of 10% in 2009 down to a recent low of 4.6% last month. In recent months, there has been a tug of war between a lower unemployment rate and an increase in labor force participation. For instance, last month, the drop in the number of unemployed workers was mostly due to a fall in the size of the labor force. As the economy gains strength, more would-be workers are expected to return (or enter) the labor market as job prospects improve. Over the past year, slight improvements in unemployment have been made even as participation has increased.

The prime-age employment-to-population ratio (EPOP)—the share of the population 25–54 years old who is working—is arguably one of the best measures of labor market strength. As with the unemployment rate, the prime-age EPOP has been digging its way out of a deep hole over the last several years, but progress in this measure has been even slower. It is, however, expected to improve as the economy strengthens. Nominal wage growth has also seen some improvements recently, increasing from an average rate of growth of about 2.0% in the first few years of the recovery to 2.5% average growth over the last year, but still well below levels consistent with the Fed’s target inflation and trend productivity growth.

All of this data points to an economy that is still depressed because of deficient aggregate demand, but which is indeed getting clearly closer to full employment, and which could at its current pace get there sometime in 2017.

That said, there are admittedly multiple scenarios for the unemployment rate over the next year as the labor market operates under incoming President Donald Trump. Here’s a look at three crucial factors in determining the outcome:

At a minimum, we can expect a sizable tax cut from Trump and the Republican Congress. Their current proposal cuts taxes primarily for those at the top of the income distribution. Increasing their after-tax income will stimulate the economy as high-income recipients will spend a portion of their savings in the economy at large. But it is rather inefficient, as higher-income Americans have a lower propensity to spend than those who are lower-income.

All else equal, tax cuts would boost the pace of growth and push down unemployment even more. The fact is that the labor market has not fully recovered because of weak aggregate demand, and an infusion of lots of money, even disproportionately and inefficiently given to the most well-off, will stimulate growth and could speed the continuing fall of the unemployment rate. Absent any countervailing push from the Federal Reserve, this tax-cut stimulus could well get us to around 4% unemployment in 2017. And there’s no reason for the Fed to be overly troubled by that number—the unemployment rate actually fell below 4% for five months in 2000 without sparking an inflationary spiral.

While it’s less likely to occur than his planned tax cuts, Trump has also indicated a desire to boost infrastructure investment. In general, public investment—both in physical and human capital—would be welcome. While the specifics of Trump’s plan are unclear, the intention is to provide tax breaks to spur private investments on infrastructure projects. It appears that Trump’s plan may simply transfer money to developers with no guarantees that net new investments are being made. Providing tax dollars for projects that were happening anyway is not only wasteful, but will deliver next to nothing in terms of economic growth and a lower unemployment rate.

In their December meeting, the Federal Reserve Board of Governors decided to slowly raise interest rates without seeing actual wage-led accelerating inflation in the data. Their expectations in 2017 are that the economy will continue to recover, with GDP picking up mildly and unemployment falling to around 4.5%. If the Fed continues to raise rates before the economy reaches full employment and before there are warranted fears of wage-led inflation growth, it will put a damper on the recovery. Slowing the economy prematurely means not only that the overall unemployment rate may not reach its proper trough, but also that the benefits of full employment will not reach all workers, namely low- and moderate-wage workers who could finally see the growing economy give them the leverage to achieve stronger wage growth.

Even though fiscal stimulus seems likely under Trump, it is unwise for the Fed to act prematurely to slow the economy before such measures are even taken. The magnitude and timing of each of these efforts can either strengthen or weaken the economy’s march towards a lower unemployment rate.

Elise Gould is a senior economist at the Economic Policy Institute.