Meet the Snoo, the Smart Crib That Is Supposed To Help Newborns Sleep 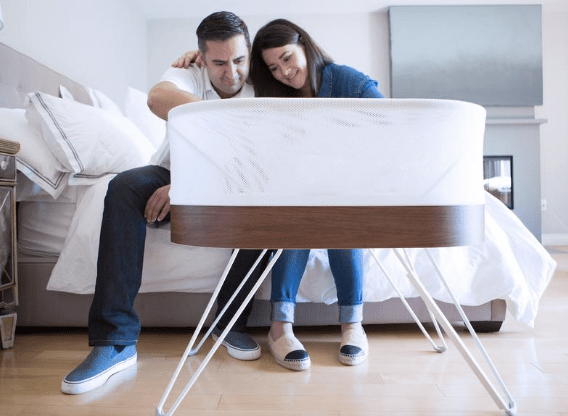 Any new parent knows that getting uninterrupted sleep with a newborn in the house is virtually impossible. That’s because newborns and infants awake frequently during the night, sometimes to eat and be changed, but sometimes just because.

Dr. Harvey Karp, a renown pediatrician and newborn sleep expert, is hoping technology, sensors, and the Internet of things can help solve this problem for new parents. His brainchild is the Snoo, an Internet connected robotic crib that has been designed by designer Yves Behar, who had a hand in products for Herman Miller, General Electric, and Puma.

The Snoo, which costs a pricey $1,160, is sold via the website of parent company, Happiest Baby.

In short, the oval-shaped crib is supposed to sense when a baby cries and how loudly, and then respond with vibration and sound to help the baby go back to sleep. The Snoo also comes with an accompanying app that lets parents from afar start swinging the crib or lower the white noise.

The Snoo is based on Karp’s well-known book on how to calm and soothe newborns, called The Happiest Baby on the Block. He espouses that babies must be hushed with white noise (which they hear while in utero), swaddled (in a warm embrace like before they were born), and swung to calm down.

As Behar explained, Karp approached him five years ago about how to apply these ideas to an actual device. Behar had known Karp because he had helped Behar and his wife with the sleep training of their four children. “We thought about how do we apply Dr. Karp’s methodology to an actual sleeping device,” explained Behar. “The aim was to help sleep-deprived parents have some consistency in applying Karp’s methodology.”

The result is the Snoo, for infants up to six months old. The sleeper looks like a bassinet but with a few noticeable differences. First, it has a swaddle built into the mattress so that babies, when swaddled, are attached to crib’s mattress to force them to sleep on their back—to reduce the risk of Sudden Infant Death Syndrome, or SIDS. Karp said that because the baby is attached to the crib and can’t roll over, this is the “safest smart sleeper for baby’s first six months.”

Within the crib are a number of sensors and microphones that sense when babies wake up and start fussing. When the sensors detect movement, as well as noise from the baby, the crib will start swinging lightly, left and right, and emit white noise. Depending on how agitated the baby is, the crib will swing more and the noise will get louder.

If the baby isn’t soothed within three minutes, the crib will stop swinging and noise will end. That’s probably a sign, Karp explained, that the baby needs something else, such as a diaper change or needs to be fed.

Karp said that the biggest challenge in creating the crib wasn’t to recognize when babies cry, but actually detecting and reacting to movement, and then building a machine that would create varied movements. The Snoo will be able to swing in broad motions as well as tiny, smaller ones. The engine allows the sleeper to swing 10 million times so it could run all night long for six-plus months, compared to the average baby swing motor that can only turn 200,000 times before failing Karp added.

Having worked on the Snoo for the past five years, Behar himself has tried the crib on several of his children and said it really does work. The crib has also been tested on hundreds of babies through independent testing, added Karp.

For more about babies, watch:

It’s worth noting that even Karp admits the crib itself won’t guarantee babies will sleep for eight hours straight nightly. Infants, especially newborns, still need to be fed and changed. But what it will solve for is helping them sleep for longer stretches until they absolutely need to get up, he says. That means at least more uninterrupted sleep for parents, which results in happier, less sleep-deprived parents.

“This is more of a humanistic project than a tech project,” said Behar. “But it’s high tech in a way where the technology feels natural.”