Italy May Be Forced to Bail Out Its Third Biggest Bank 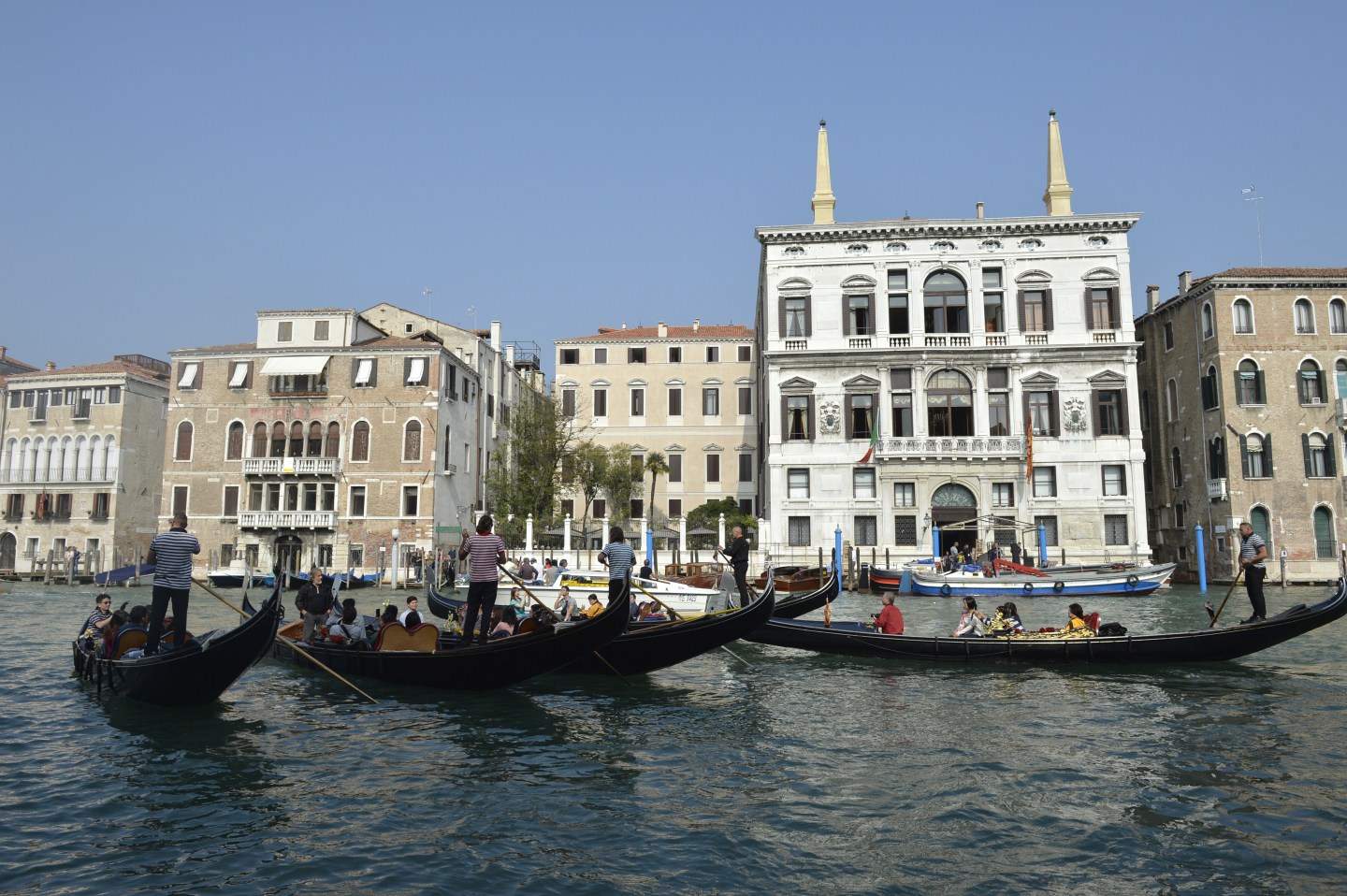 Tourists sat on gondolas take pictures of the Aman hotel on September 28, 2014 on the Grand Canal in Venice where US actor George Clooney and British fiancee, Amal Alamuddin celebrate their wedding. Hollywood heartthrob George Clooney and Lebanese-British lawyer Amal Alamuddin married in Venice on Saturday September 27, 2014 before partying the night away with their A-list friends in one of the most high-profile celebrity weddings in years. "George Clooney and Amal Alamuddin were married today (September 27) in a private ceremony in Venice, Italy," Clooney spokesman Stan Rosenfield said. The announcement came as a surprise as the pair were not expected to officially tie the knot until Monday, though they are still tipped for a civil ceremony at the town hall to officialise the marriage under Italian law. AFP PHOTO / ANDREAS SOLARO (Photo credit should read ANDREAS SOLARO/AFP/Getty Images)
Andreas Solaro — AFP/Getty Images

Italy’s government is getting closure to pumping billions into the country’s third-largest bank, Monte dei Paschi di Siena, in order to save it. The bank earlier failed to persuade enough private investors to take part in a major capital-raising.

Monte dei Paschi (MPS), which the European Central Bank ordered to raise billions of euros in fresh capital by year-end or face being wound up, is a key moment in the bad loan crisis in the Italian banking system—a 200 billion euro ($208 billion) problem that many see as the biggest threat to financial stability in the Eurozone.

The bank’s board is set to approve a request for government help at a meeting later Thursday, according to Reuters.

The writing had been on the wall for the world’s oldest bank ever since voters rejected Prime Minister Matteo Renzi’s electoral reforms in a referendum at the start of the month. Renzi’s subsequent resignation raised political risk in the country by creating pressure for early elections which may bring the populist and anti-euro 5 Stars Movement to power.

Against that background, few private investors, especially foreign ones, were willing to invest in a three-pronged scheme that involved selling off billions of bad loans (at a steep loss), and issuing new shares and converting the bank’s junior bonds into equity to the tune of 5 billion euros. The make-or-break moment came when the Qatar Investment Authority, which Rome had courted for months, decided late Wednesday against ‘anchoring’ the planned share issue.

The debt-for-equity swap also fell short of expectations, with investors tendering only 2.7 billion euros worth of bonds. The other bondholders preferred to take their chances in what may be a punishing ‘bail-in.’ EU rules that came into effect at the start of this year require shareholders and bondholders to take losses before taxpayers’ money is injected.

The question is how, and how much? Over 2 billion euros of MPS’s junior debt is held by 40,000 individual investors, many of whom could be wiped out entirely by a bail-in. Economy Minister Pier Carlo Padoan said on Wednesday the impact on retail savers would be “absolutely minimized or inexistent.”

At present, the bonds are trading at less than half face value, while MPS’s shares fell 7.5% in response to the news Thursday.

The money for the bailout will come from a 20 billion euro backstop mechanism approved by lawmakers earlier in the week. Bloomberg reported that the cabinet of new Prime Minister Paolo Gentiloni could meet as early as this evening to approve a decree to approve a bailout.

The cabinet’s decision is likely to have an immediate effect on the plans of other Italian banks in similarly dire straits. These include Genoa-based Carige, and Banca Popolare di Vicenzo and Veneto Banca, both located in the Venice region.

The government will consider its actions a major success if it can keep the cost of the rescue (or rescues) to 20 billion euros, without having to ask for Eurozone help that would come with painful political conditions attached. At only 20 billion euros, it would be less than one-third of what Spain, a smaller economy, needed from the Eurozone and IMF to rescue its banks in 2012.

The bond market is optimistic about its chances—yields on its benchmark bonds have come down to 1.86% from 2.14% in recent weeks as the endgame approached.

However, another short-term fix arranged at home may not be the best long-term outcome for Italy, which has been plagued by low growth ever since the euro was introduced in 1999. The reforms imposed on Spain have helped it to become the fastest-growing economy in the Eurozone for the last couple of years.