Italy Is Preparing a Bailout of Its Largest Problem Bank 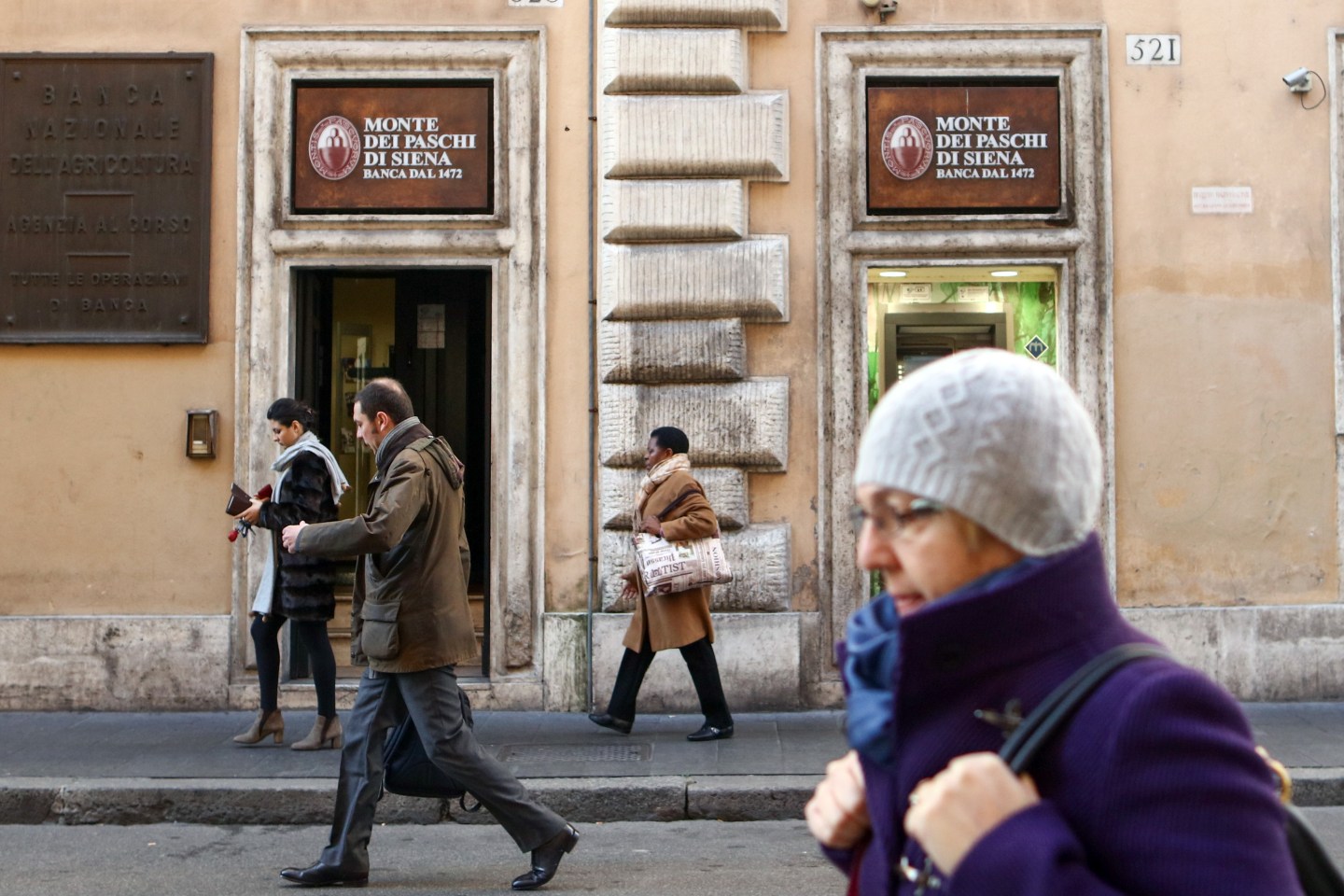 Pedestrians pass a branch of Banca Monte dei Paschi di Siena SpA bank after the Italian vote on constitutional reform referendum in Rome, Italy, on Monday, Dec. 5, 2016. Banca Monte dei Paschi di Siena SpA shares seesawed on Monday after Prime Minister Matteo Renzis decision to resign added to uncertainty about the banks plans to raise as much as 5 billion euros ($5.3 billion) in capital by the end of the year. Photographer: Chris Ratcliffe/Bloomberg via Getty Images
Bloomberg Bloomberg via Getty Images

The Tuscan bank, founded during the Renaissance, is looking to raise 5 billion euros ($5.4 billion) this month to avoid being wound down, but investors are reluctant to commit funds after Renzi’s referendum defeat left a political vacuum. Renzi has said he will quit, but the country’s head of state asked him to put his resignation on hold until parliament has approved the 2017 budget. That could be done as early as Friday.

One person familiar with the matter said the bank was looking at the idea of a so-called precautionary recapitalisation, which would involve the government injecting cash.

Two other sources said a government decree authorising the state recapitalisation was ready, with its implementation depending on political developments in the next few days.

An injection of cash by the state would first require losses for institutional investors who hold the bank’s junior debt, according to EU banking rules. The bank’s finance chief, Francesco Mele, had hinted at such an outcome already last week. The Treasury and MPS weren’t immediately available for comment.

Retail investors who hold 2.1 billion euros of the bank’s subordinated bonds would be either spared or reimbursed, according to a person familiar with the matter.

Retail investors hold nearly two-thirds of MPS’s subordinated debt, and many claim that the bonds were sold to them as being essentially as safe as deposits, even though they weren’t covered by the country’s deposit protection scheme.

The reports have pushed the bank’s shares close to a new all-time low Tuesday morning in Milan. However, the prospect of Rome and Brussels co-operating to avoid a disorderly resolution of Monte dei Paschi has lifted the shares of all of Italy’s other large banks. While MPS was down 3.4% by lunchtime, others were up as much as 3.9%.

Sources said Monday banks working on backing the planned 5 billion euro cash call had decided to wait three to four days until the political situation was clearer. Under the terms of their involvement, they can drop the transaction due if market conditions are too rough.

Monte dei Paschi, rated the weakest lender in European regulatory stress tests this summer, had planned to secure a firm commitment from one or more ‘anchor’ investors and launch a share sale as early as Wednesday.

The lender said Monday that investors had offered to swap up to a 1.029 billion euros in debt for new shares, in the crucial first plank of its rescue plan.