What Italy’s ‘No’ Vote Means for the Euro and Banks 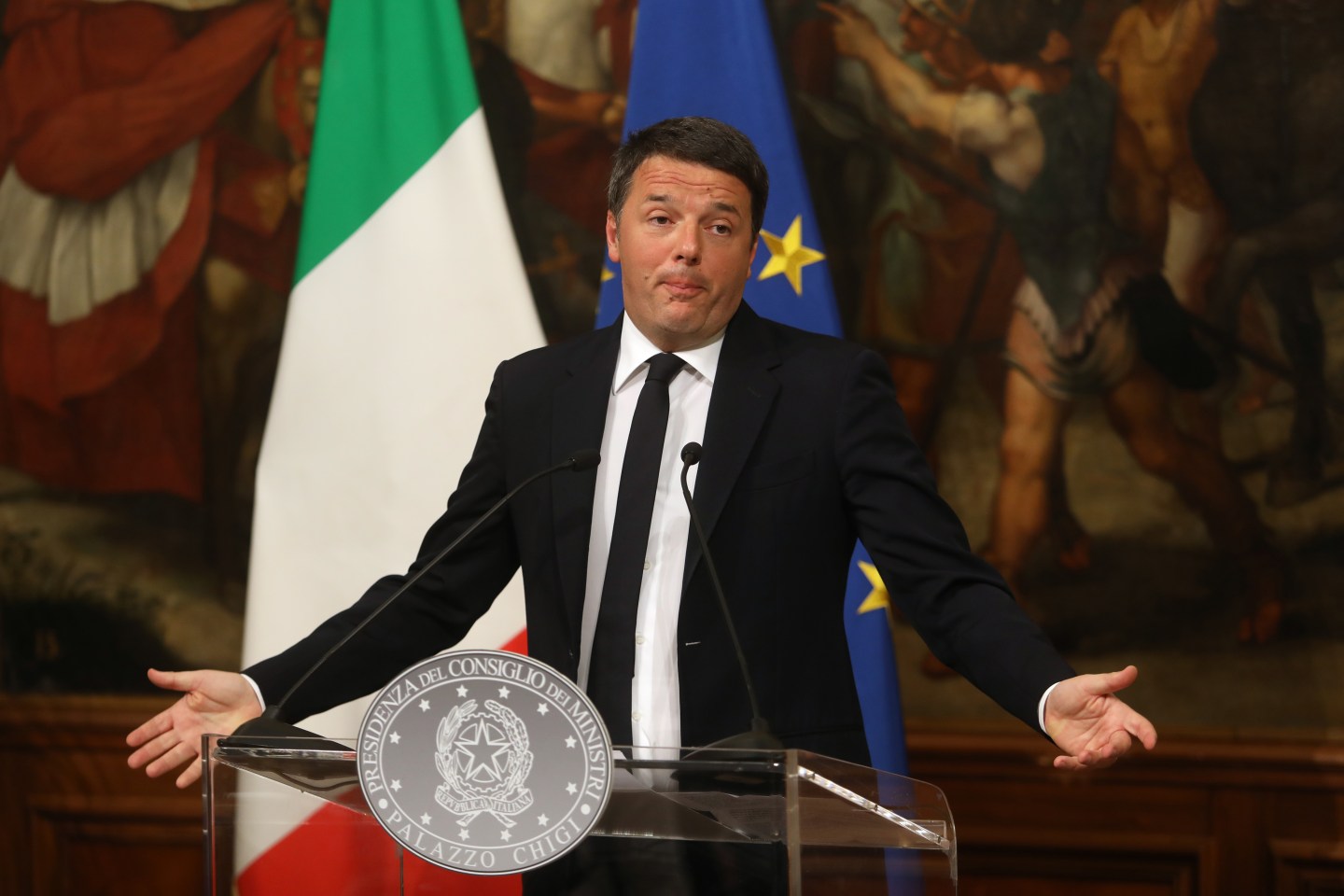 This weekend, Italian voters shot down a constitutional change aimed at creating a stronger government, but would have also had the immediate impact of bolstering Italy’s current leadership. The result appears to be another example of voters wanting to punish those in power, even in the absence of obvious alternatives. Already, the vote has thrown European markets into turmoil, with the value of Italian bonds tumbling.

And it will leave Italy without a prime minister for now. Prime Minister Matteo Renzi had called the referendum and made it into a personal vote of confidence. Following the vote, Renzi announced that he would step down.

Here’s what you need to know about what happens next?

Is this another victory for populists against the political establishment?

Not entirely. All of Italy’s political parties, with the exception of Renzi’s center-left Democratic Party, were lining up to vote ‘No’ for various reasons. Some just wanted to be rid of Renzi, others believed that the planned reform would concentrate too much power in the government and remove valuable checks and balances. The one theme that united them is that they all preferred the status quo.

So – there’s no connection to the Trump/Brexit phenomenon?

Less than meets the eye. But for sure, Italy is a country with high unemployment, weak economic growth, a big problem with immigration and refugees, and plenty of resentment for the political elite. So there are many reasons for Italians to vent at whoever is in power, even if Renzi has done more to address those problems than most in recent memory.

Does the ‘No’ vote mean that Italy leave the Eurozone?

Not in the near term, at least. The euro dipped quite sharply when the result was published, because the margin of Renzi’s defeat was much larger than expected. But it’s now trading above its Friday close against the dollar, because the worst case-scenario, which could include snap elections won by a single-party, anti-euro government like the populist 5 Stars Movement, still looks very unlikely. A big majority of Italians want to keep the euro. The longer term looks a lot worse, though.

Because a period of political paralysis is very bad news for the banks on which the economy depends for finance. And Italy’s banks are already in bad shape. Over half a dozen of the biggest are in the middle of recapitalizations or mergers aimed at adding enough financial footing to tackle a collective pile of 200 billion euro ($214 billion) in bad loans. At least some of those work-outs will need government backing. And the referendum puts up for questions whether the banks will get that. To illustrate, the top 7 losers on the Milan stock exchange this morning were all banks, down by between 3.1% and 7.3%.

Are they going to collapse?

The chance of that just went up. And some drastic emergency measures could soon become necessary to stop it happening. The most acute problem is that an effort to raise 5 billion euro ($5.4 billion) in additional capital for the country’s third-biggest bank, Monte dei Paschi di Siena, is likely to fail. That will make it harder to get similar deals done. If Monte dei Paschi di Siena can’t get the money from private investors, then either it will need a taxpayer-led bailout or it will have to ‘bail in’ its junior bondholders, turning their relative safe bonds into more risky, and likely lower valued, shares of the bank. The first would break the EU’s new rules on bailouts, and, in Italy’s case, possibly budget deficits too. The second would be political dynamite, given that nearly two-thirds of MPS’s junior debt is held by individual investors, many of whom thought their savings were protected.

Are other banks at risk too?

Not to the same extent, and the two most significant Italian banks–Intesa Sanpaolo (IITSF) and Unicredit (UNCFF)–are among the nation’s strongest. But for many other smaller banks, there are few alternatives to swapping debt for equity, and burning investors as they write off their bad loans. It is, in the parlance, a systemic problem, and there is a clear risk of contagion. Fortunately for Italy, the European Central Bank’s quantitative easing program is likely to keep the market-related risks within limits by continuing to buy up large amounts of Italian bonds. The ECB’s Mario Draghi is holding a press conference on Thursday, which is likely to closely watched by bank investors.

But who is going to run Italy now?

Renzi is submitting his formal resignation to President Sergio Mattarella today. The national executive of Renzi’s Democratic Party is likely to start a search for a new leader Tuesday. Mattarella is expected to build a new government on the basis of the existing Chamber of Deputies, the lower house of Italy’s legislative branch. The new government may be led by whoever succeeds Renzi as head of that party, or by a non-partisan group of technocrats. Italy has more and more resorted to technocratic governments in recent years as consensus-driven politics broke down. Economy Minister Piercarlo Padoan, a former International Monetary Fund Director, and anti-graft magistrate Piero Grasso have been mentioned as possible caretaker Prime Ministers.

Are you seriously suggesting that a G-7 country’s answer to the crisis of legitimacy in western democracy is another government of unelected officials?

Errrr, ummm…Have you got a better idea?

But how would they deal with a banking crisis?

They’d struggle. They may have to seek the kind of Eurozone/IMF-funded bailout that Spain got in 2012. That recapitalized the banks in return for thorough reforms both of the banking sector, and of economic policymaking. If the past is any guide, the pro-European Italian mainstream will explore this option before they risk fresh elections and handing over power to the 5 Stars Movement. Either way, the public will get to deliver its verdict no later than 2018, when the next general election is due.