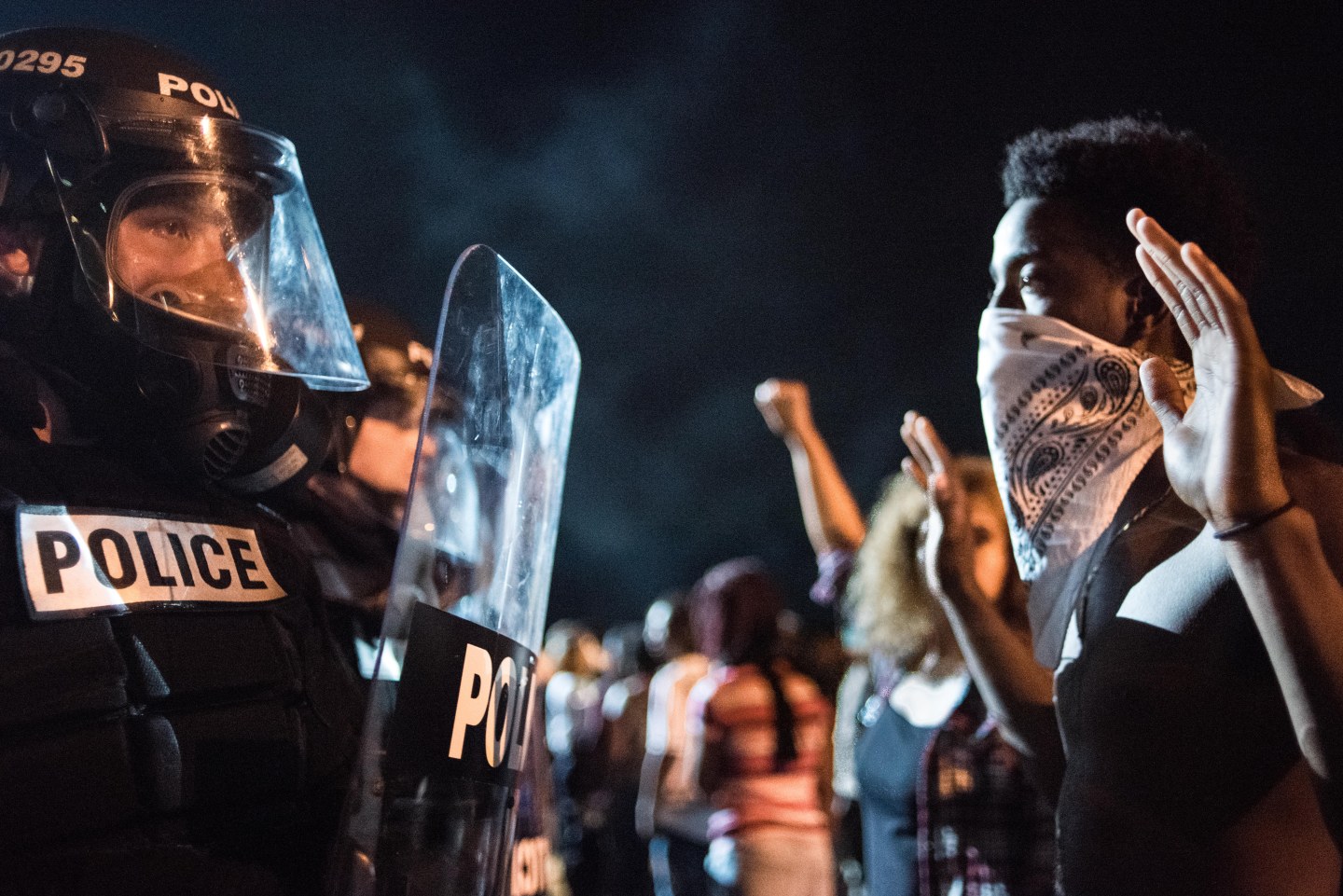 CHARLOTTE, NC - SEPTEMBER 21: Police officers face off with protesters on the I-85 (Interstate 85) during protests in the early hours of September 21, 2016 in Charlotte, North Carolina. The protests began last night, following the fatal shooting of 43-year-old Keith Lamont Scott by a police officer at an apartment complex near UNC Charlotte. (Photo by Sean Rayford/Getty Images)
Sean Rayford — Getty Images

Walmart (WMT) once again finds itself embroiled in the country’s political clashes.

The discount retailer said on Wednesday it is removing from its e-commerce site a line of clothing with the caption “Bulletproof – Black Lives Matter” after a police advocacy group, the National Fraternal Order of Police, complained and accused Walmart of “profiting from racial division.”

As of late Wednesday morning, Amazon.com (AMZN) was still carrying the merchandise. But a NFOP spokesman told Fortune the organization had just sent Amazon a similar letter to the one it sent Walmart. Amazon declined to comment to Fortune on reaction to the letter.

The clothing is not sold by Walmart directly and is not carried in stores, but rather sold on walmart.com by a vendor called Old Glory. Walmart has tripled the assortment of merchandise on its web site to 23 million items this year in a bid to build up its online marketplace and better compete with the likes of eBay (EBAY) and Amazon.com (AMZN). The move has paid off, with Walmart’s online growth taking off again.

But this latest contretemps illustrates the perils for a retailer of carrying third-party merchandise, much of which can be seen as objectionable by some Walmart customers yet still make it onto its site. In October, Walmart and other stores had to pull a “Tranny Granny” Halloween costume after fielding complaints.

“Like other online retailers, we have a marketplace with millions of items offered by third parties that includes Blue Lives Matter, Black Lives Matter and All Lives Matter merchandise. After hearing concerns from customers, we are removing the specific item with the ‘bulletproof’ reference,” a Walmart spokesman told Fortune in an e-mailed statement.

Walmart will remove the items that say “BULLETPROOF” with “Black Lives Matter” underneath but will not pull other Black Lives Matter merchandise. The items below are still visible on walmart.com but the “buy” function for them has been disabled.

The National Fraternal Order of Police, a group that has clashed with the Black Lives Matter movement, sent Wal-Mart Stores CEO Doug McMillon a letter on Tuesday in which the police group’s president, Chuck Canterbury, criticized Walmart for selling the items. He said doing so “will damage your company’s good name amongst FOP members” and added, “Turning a buck on strained relationships will not contribute to the healing process” coming from racial division.

Letter from National President Canterbury to Walmart President and CEO regarding third party sellers of BLM gear on the company website. pic.twitter.com/BLu1Eb0iND

A retailer the size of Walmart can scarcely avoid offending some part of its clientele while trying to serve another. The retailer has found itself the object of customer ire in the recent past for moves such as removing firearms and Confederate-flag adorned merchandise to lobbying the Arkansas governor last year to scuttle a law seen by some as homophobic.