What This Year’s Undergraduate Business Majors Made in Starting Pay 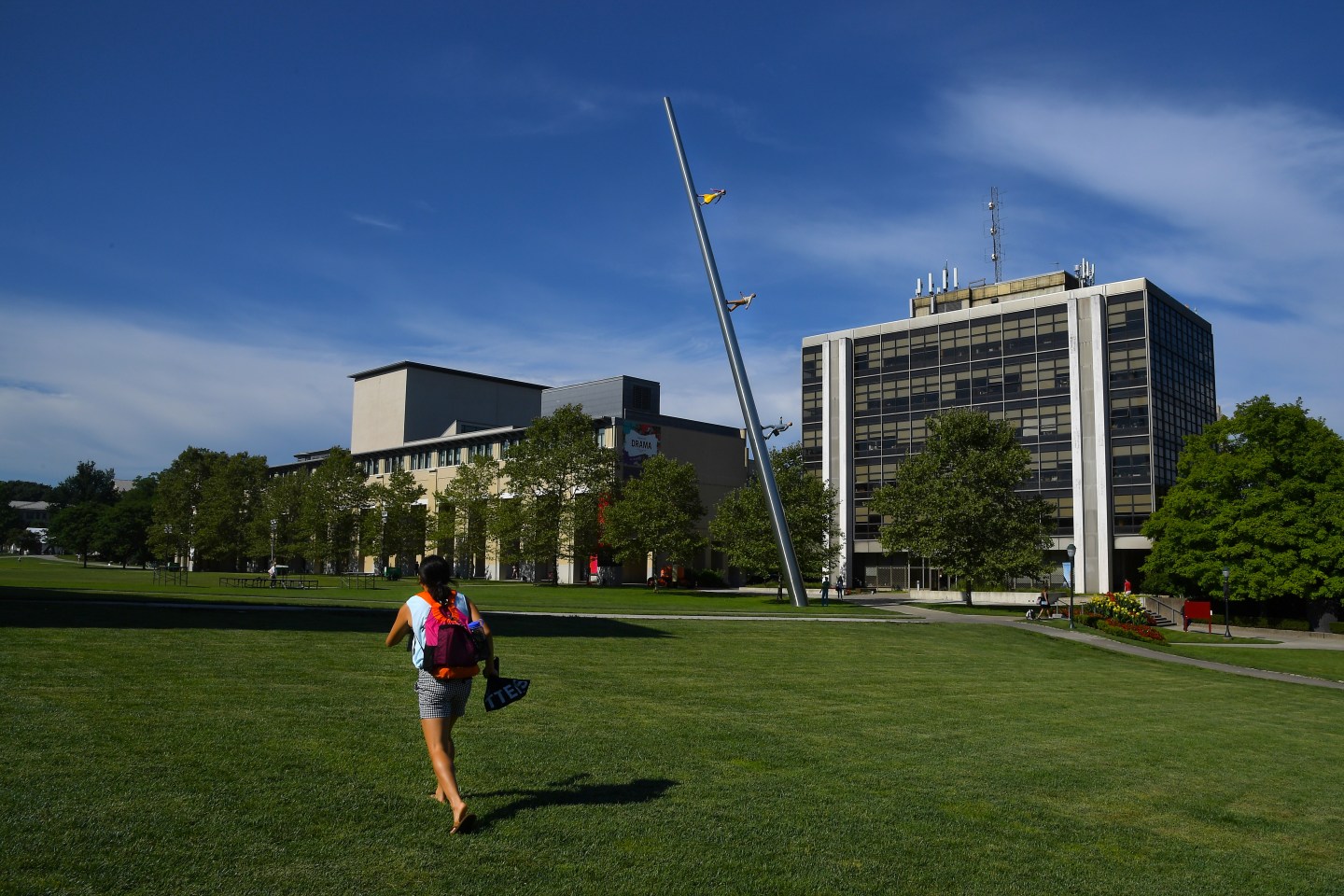 PITTSBURGH, PA - AUGUST 24: A student walks across The Cut on the campus of Carnegie Mellon University where a 100-foot-tall, seven-ton sculpture created by CMU alumnus Jonathan Borofsky features a woman in the lead August 24, 2016 in Pittsburgh, PA. The school is actively recruiting female students into the STEM curriculum. (Photo by Katherine Frey/The Washington Post via Getty Images)
Katherine Frey—The Washington Post/Getty Images

This piece originally appeared on Poets&Quants.

Donald Trump knew it way back in 1968 when he transferred out of Fordham University as a sophomore and went to the Wharton School of Business.

Then as now, Wharton is the money school, the place where employers dangle the biggest pay offers to undergraduate business majors anywhere in the world. In many cases, first year pay out of Wharton’s undergraduate program rivals the kind of money MBAs at other business schools make.

This year Wharton undergrads accepted jobs that paid record average salary and sign-on bonus of $86,065. The average base salary was $77,566, while the average signing bonus, received by 81% of the students, was $10,493. And those sums don’t even include what Wharton undergrads expect to make in their year-end bonus. Whether wishful thinking or not, the average anticipated extra bonus comes to $28,617 each. Add it all up and the first-year total pay is comfortably in six figures at $109,817.

Where the Money Is? Wharton, Berkeley, Carnegie Mellon, Michigan & Virginia

Even without the non-guaranteed year-end bonus, Wharton’s salary and signing bonus totals this year are nearly $5,000 more than runner-up UC-Berkeley’s Haas School undergrads who earned first year total pay of $81,251 in the best economy in the world in the Bay Area. But students didn’t have to graduate in a hot region to immediately make good on their degrees. Among the top five undergraduate schools by pay this year were those in Pennsylvania and Michigan.

Graduates of Carnegie Mellon’s Tepper School of Business in Pittsburgh took home starting pay packages of $81,051, while those at the University of Michigan’s Ross School of Business scored total pay of $78,952. Rounding out the top five was the University of Virginia’s McIntire School of Commerce where the Class of 2016 left campus with starting pay of $78,157.
It was, in other words, a very good year for undergraduate business majors, regardless of all the talk about an uneven or uncertain economic environment. Only five of the top 50 undergraduate business schools failed to exceed this year’s overall average salary to undergrads of $52,569, itself a 3.8% year-over-year increase, according to the National Association of Colleges and Employers’s most recent salary survey.

Wharton’s employment report helps to explain why the school continues to deliver the highest pay results to its grads. This past year, the typical senior averaged 7.6 round one interviews and 1.8 job offers. Some 334 employers conducted 8,910 job interviews with Wharton undergrads this past year. The employment rate for those seeking a job was an impressive 94.6% three months after graduation.

One reason why Wharton consistently outperforms when it comes to undergraduate pay, of course, is because of the high percentage of graduates who go into finance. In 2016, nearly half, or 48.8% of the graduating class, headed into Wall Street. Some 29.7% took jobs in investment banking, 4.6% each accepted offers from investment management, private equity of diversified financial service companies. Another 3% landed positions with hedge funds, while 2.5% joined venture capital firms.

And though the Wharton stats are impressive, there is also evidence of a slowing of the economic recovery. This year’s $77,566 average salary was just 1.8% above last year, following a much stronger 9.7% rise a year earlier when average salaries leapt from $69,506 to $76,231. The number of employers conducting on-campus job interviews fell 10.5% this year to 334 from 373 a year earlier. The total number of interviews declined by 19.3% to 8,910 from 11,046 in the previous year. Moreover, prestige investment banker Goldman Sachs hired far fewer Wharton undergrads this year. Goldman cut its hiring in half to 11 from 23 last year.

Some of these shifts occurred as student interests change. “Unlike previous years, fewer than half of the members of the Wharton Class of 2016 entered a financial job function, with the popularity of investment banking roles declining to 21.6% from 26.8% in 2015,” explains Barbara Hewitt, senior associate director of career services at the University of Pennsylvania. “The percentage of students entering trading also declined to 2% from 4.1% in 2015.

“Fewer students entered the investment banking industry (27.6% as opposed to 35.3% in 2015) and we continued to see an increase in the number students entering the technology industry, ranging from start-ups to large corporations, such as Microsoft (MSFT) and Google (GOOGL). Consulting remained another strong choice with over 20.7% of students selecting it, although this was down from 22% in 2015,” she adds.

At Ross, the Median Base Salary for a Financial Hire Was $85,000 This Year

At Michigan’s Ross School, where undergrads enjoyed the fourth highest pay packages, 93.4% of this year’s class had job offers at graduation, while 95.5% had offers three months later. Some 44% of the students accepted positions in finance, where the median salary was a whopping $85,000, while 22% chose consulting, where the base was $74,000. Those two industry sectors paid the highest median starting salaries. In comparison, tech recruits were paid $68,000 and consumer packaged good hires $62,000.

Starting pay numbers are influenced by a number of factors, including geography and industry choice. But a school’s brand plays a major role in how much employers are willing to pay freshly minted grads. The bigger the brand, the more likely it has national or even global cache. That translates into a larger paycheck. The bigger the brand, the more likely graduates will find an open door at the world’s most prestigious companies that pay the most for young talent. It’s less about being on the east or west coasts; it’s more about who actively recruits the students. McKinsey, Goldman Sachs (GS) and Google hire from big brand institutions. Many of the highest paid analyst positions at tier-one consulting firms and financial service companies are simply inaccessible to graduates of many regional schools.

Just find two business schools in the same city and see how brand can matter more than location. This year’s graduating class at Carnegie Mellon University’s business school in Pittsburgh scored average total compensation of $81,051, third highest for an undergraduate business program. At the University of Pittsburgh’s College of Business Administration, grads pulled down total starting pay of $55,833, a difference of 45%. In New York City, meantime, business undergrads at New York University’s Stern School of Business averaged total compensation this year of $78,052 versus $61,953 at Fordham University’s Gabelli School of Business.

Not surprisingly, employers also are more willing to provide bonus enticements to graduates of the most prestigious programs. Consider the College of New Jersey, which has an undergraduate business program that ranks among the top 50 in the U.S. and is a mere hour-and-one-half drive from New York City. Only 11% of its business graduates received sign-on bonuses this year. At Penn State University’s Smeal College of Business, nearly a four-hour drive from New York, half of this year’s graduates were given signing bonuses.

So students and their parents have to factor this perspective into the numbers. It doesn’t necessarily mean a graduate will have a job that is less meaningful or challenging. It doesn’t mean that a graduate would end up making more later on. But immediately after graduation, the pay an undergraduate student is offered will reflect the perceived value of the brand by employers. It’s a lesson Donald Trump learned early on in life.