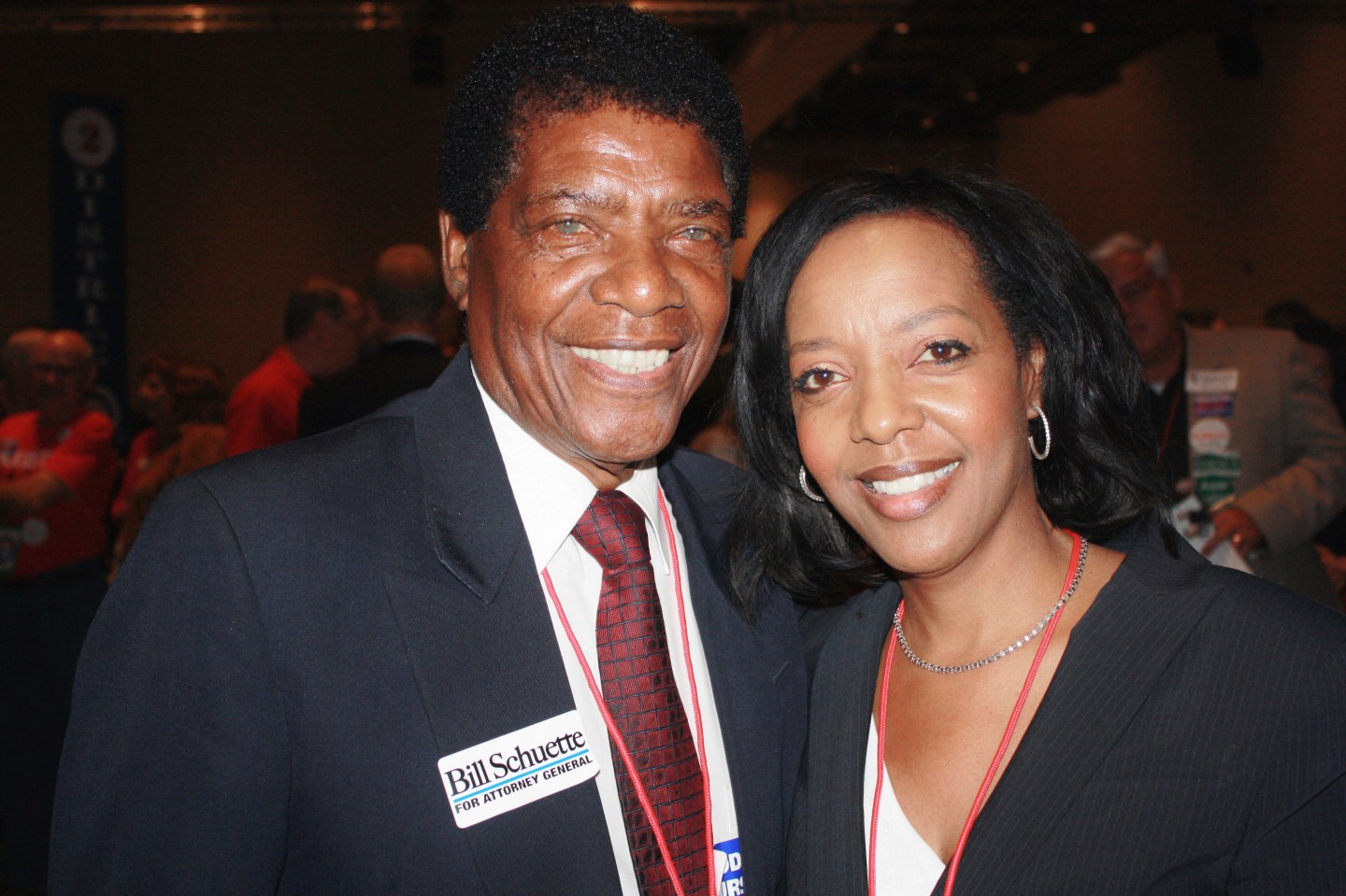 In an undated handout photo provided by DarKen Photography, Henry Hatter poses with his daughter Kelly Mitchell. Growing up in a black and Republican family outside the heavily Democratic city of Flint, Mich., Kelly said she learned from her parents the importance of sticking to her beliefs and working hard to achieve goals. On Monday, Dec. 19, 2016, she marks a major milestone by casting her vote as a member of Michigan's Electoral College along with her father, Henry. (DarKen Photography via AP)
DarKen Photography AP

Growing up black and Republican outside the heavily Democratic city of Flint, Michigan, Kelly Mitchell learned from her parents the importance of sticking to her beliefs and working hard to achieve goals.

On Monday, she’ll mark a personal and professional milestone: Casting her vote as a member of Michigan’s Electoral College along with her father and fellow elector, Henry Hatter.

“I really wanted this for me and my dad,” said Mitchell, a sales account manager from Grand Rapids, state party official and member of President-elect Donald Trump’s energy-focused transition team. “My dad is probably my biggest cheerleader. I was raised … by two loving parents and have been an activist in Michigan politics for over 30 years.”

Mitchell and Hatter are among the nation’s few black Republican electors, and a rare father-daughter duo. They recognize their unusual position, considering exit polls that show 8% of blacks nationally voted for Trump and 88% for Democratic rival Hillary Clinton.

“I don’t really worry about what other people who say to me about race or how I should vote,” Mitchell told The Associated Press. “It’s been what’s right for and worked for me. I make no apologies.”

Mitchell said she “grew up shadowing” Hatter, a retired automotive engineer who has served the GOP on the county, district and state levels and was an elector for President Gerald Ford in 1976.

“Even when others attempted to discourage her, she held the course,” said Hatter, 80.

The state requires the 16 members of the Electoral College to convene Monday at the statehouse to vote according to the results of Michigan’s presidential election; Trump won by .2 percentage points. Most state electors were interviewed by The Associated Press, and they expressed personal support for him regardless.

Mitchell, Hatter and other electors say they’ve been deluged with missives urging them to vote for Clinton or a different Republican. Those emails, phone calls, postcards—even some Christmas cards, Hatter said—have not swayed them.

Neither have critics, who accuse Trump of being a racist and sexist for, among other things, being slow to denounce white supremacists and a decade-old recording of him making vulgar comments about women.

Mitchell and Hatter both have met Trump. She said “despite his imperfections (people) will find his policies will benefit the majority of Americans.” Her dad spoke in a language Michigan residents might best understand: “People are always listening for a knock in the engine instead of how smoothly the engine runs.”

Although he didn’t vote for President Barack Obama, who twice won Michigan, Hatter said “he did a great job in reassuring the country that it would remain a stable and secure country for all Americans.”

As they jointly cast votes in the statehouse, Mitchell will be thinking of her father as well as her mother, who died in 2013, right before Mitchell was elected vice chair of the Michigan Republicans.

“I just picked up the torch, and carried it for this generation,” she said.