Asahi Forks Over $7.8 Billion for 5 of AB InBev’s Beer Brands 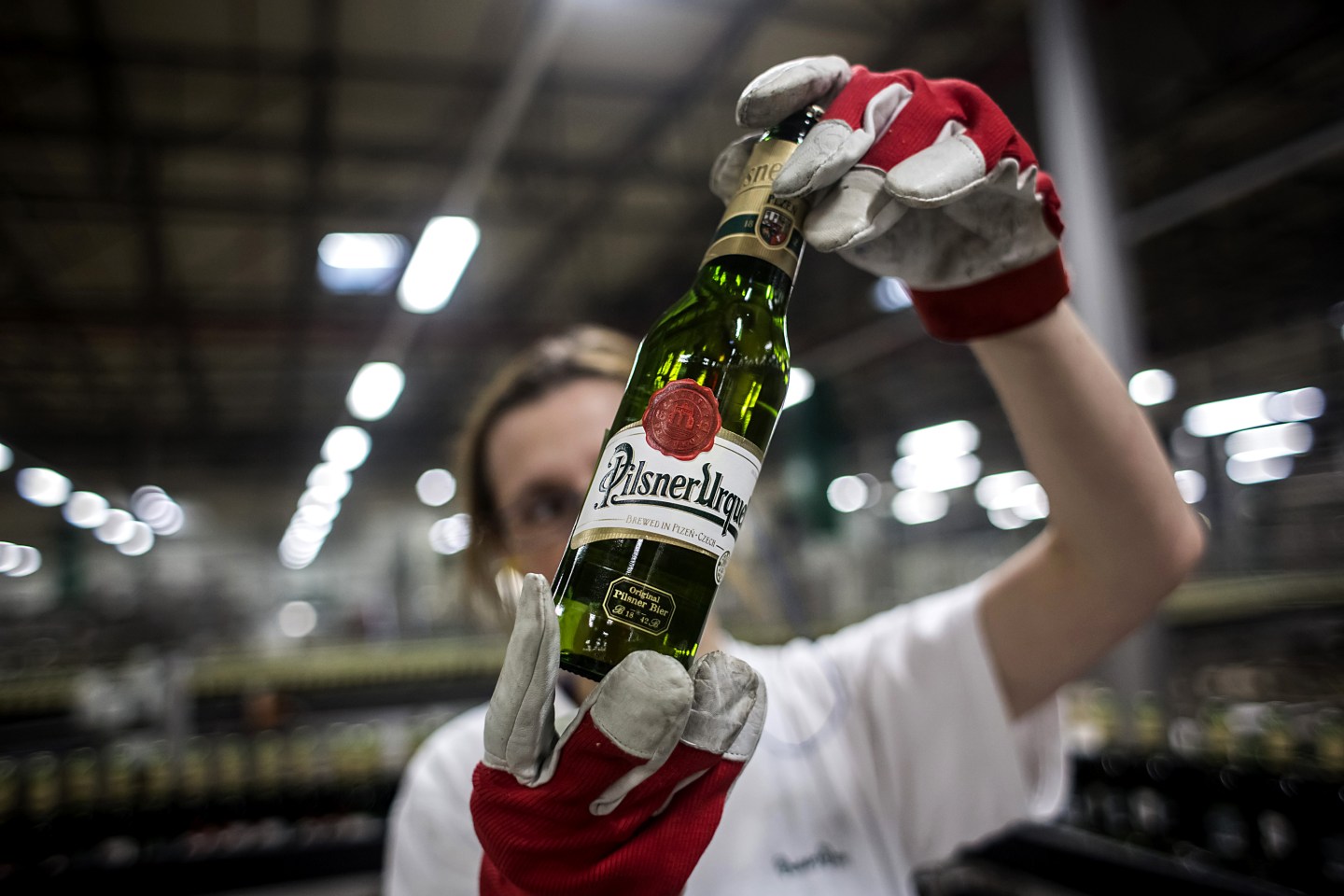 A worker holds up a bottle of beer against the light during a quality control inspection on the production line at the Pilsner Urquell brewery, operated by SABMiller Plc, in Plzen, Czech Republic, on Monday, Dec. 7, 2015. Carrying the Czech Beer label requires the use of specific types of Czech-grown barley and hops that give the domestic brew its characteristic bitterness, aroma and drinkability, said Vladimir Balach, the head of the Czech Beer and Malt Association in a 2014 interview. Photographer: Martin Divisek/Bloomberg via Getty Images
Martin Divisek/Bloomberg via Getty Images

Anheuser-Busch InBev had agreed to sell the brands, which include the Czech market leader Pilsner Urquell, Poland’s Tyskie and Lecher and Hungary’s Dreier, to help get clearance from competition regulators for its $100 billion takeover of SABMiller (SBMRY).

The deal, expected to close in the first half of next year, would be Asahi‘s biggest acquisition and its latest purchase in Europe, where it has already bought SABMiller Western European brands Peroni and Grolsch.

The Asian brewer wants to offset slow growth in its home market and has sought to justify paying a higher price for overseas acquisitions based on the cost benefits it would extract and the ability to use the brands to boost its international sales.

Asahi said in a statement the acquisition will lift its overseas sales as a proportion of total sales to nearly a quarter, from 16% in October.

“The Target Business is highly compatible with our existing business in Western Europe and will strengthen our business platform, allowing Asahi to grow sustainably across Europe,” Asahi said.

A source had told Reuters Asahi was a favorite to buy the Eastern European brands given its existing global distribution channels. Some of the other contenders for the brands were a consortium led by Swiss investment firm Jacobs Holding, PPF, the investment firm of Czech business tycoon Petr Kellner, and China Resources, sources have said.

The package had been expected to fetch around $6.4 billion, sources said.

It is the second biggest acquisition by a Japanese brewer on record, behind brewer and distiller Suntory Holdings’s near $14 billion purchase of Beam in January 2014.

Asahi shares fell as much as 6.4% after the report before closing down 4.6%, with market participants pointing to investor nerves about how the deal would be funded.

Asahi‘s statement did not say how the deal would be funded. As of September, Asahi had $471 million in cash on its balance sheet, according to Thomson Reuters data.

“If funding is by a large amount of cash, it reduces the probability of ROE (return on equity) activity,” said Gavin Parry, managing director of Parry International Trading in Hong Kong. “Without details on funding, you have to assume it would impact cashflow.”

Not including the potential Asahi deal, Japanese companies have spent $77.6 billion on outbound mergers and acquisitions, Thomson Reuters data shows, as they seek to counter bleak prospects, including deflation, weak consumer spending and a falling population, at home.

The Asahi deal pushes this year’s figure close to the record $87 billion Japan Inc spent on overseas M&A in 2015.