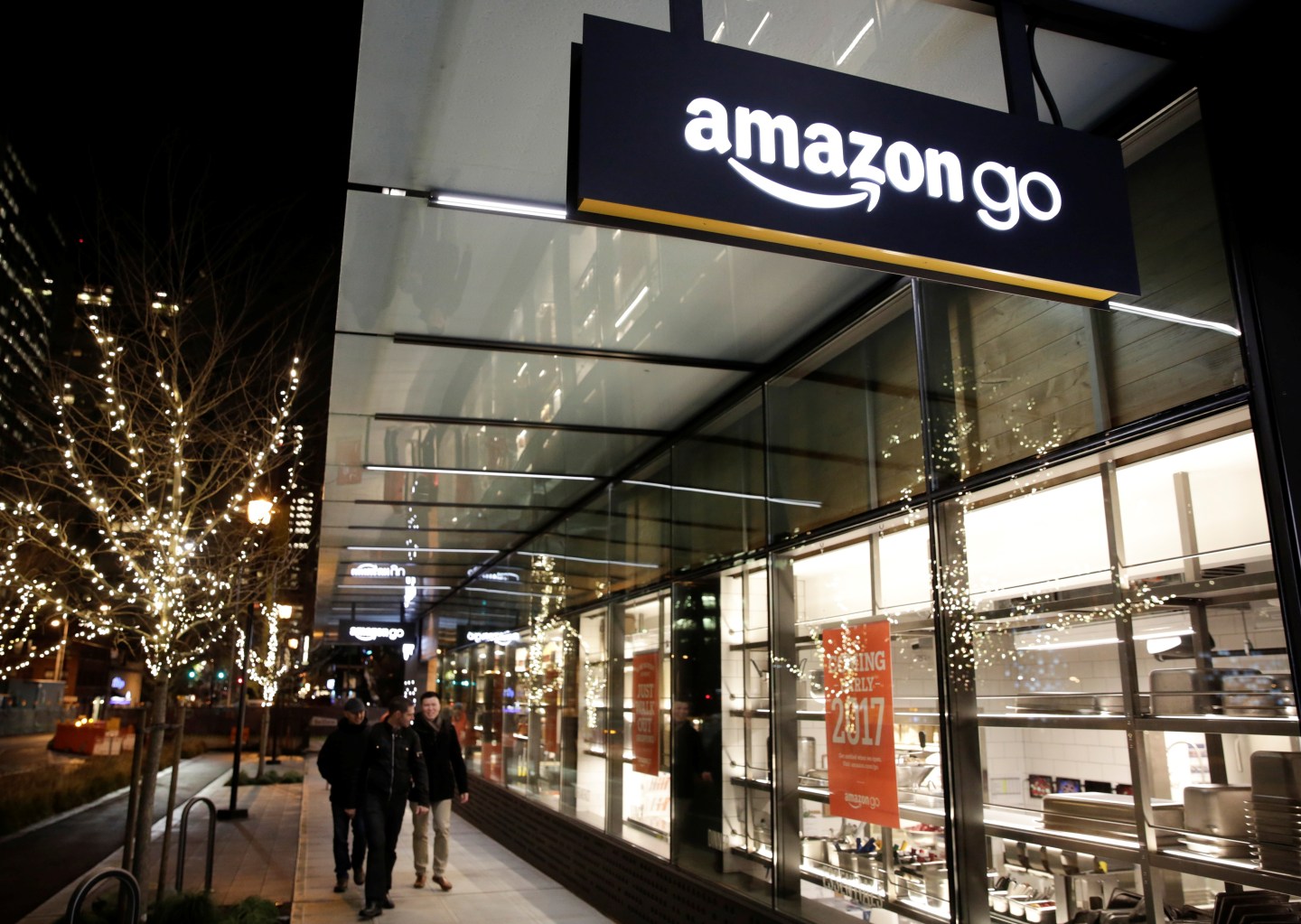 Earlier this month, online retail giant Amazon unveiled its first convenience store concept. At Amazon Go, shoppers would buy perishable goods like bread, cheese, and milk, just like in a 7-Eleven, except there are no cashiers or checkout lines. You walk in, pick up what you want, and walk right out. All items get charged automatically. It’s one-click ordering, brick-and-mortar style. But as impressive as the idea might be, the technologies behind it aren’t entirely new. IBM (IBM), for one, foresaw a cashier-less future years ago.

In a 2006 TV commercial titled “The Future Market,” Big Blue depicted how grocery stores could deploy a myriad of radio-frequency identification (RFID) technologies for exactly what Jeff Bezos is doing today. So why is Amazon the only company that can put all of the pieces together?

To be sure, Amazon’s “just walk out shopping” is indeed backed by real technologies. A patent filed by the company in 2014 reveals just how shoppers are tracked and items are counted: by the use of extensive camera systems—much like the driverless cars made by Tesla (TSLA) or Google (GOOG) that are capable of navigating busy streets. Combined with embedded sensors, machine learning, and artificial intelligence, the Amazon system is so nuanced that it can distinguish when two people are reaching for the same item based on individual skin tones.

But why no other technology creators, from IBM to Microsoft (MSFT), from Intel (INTC) to Google, are capable of giving Walmart (WMT) or 7-Eleven a facelift? What’s so special about Amazon (AMZN) and the way it pursues its strategy?

In studying disruptive innovation, Harvard Business School’s Clayton Christensen noticed more than a decade ago that technology creators often struggle to commercialize promising technologies, even when the clear benefits of doing so are demonstrated. The problem gets further exacerbated when the firm needs to work with other companies down the value chain in manufacturing the finished goods.

In 1965, scientists at DuPont (DD) formulated an ultra-strong fiber called Kevlar. The endurance of the miracle fiber would have been an obvious choice for tire cord, replacing the steel-belted radial tires. But after spending $400 million on building a Kevlar cord plant, DuPont belatedly discovered an adhesion problem of the Kevlar cord with the tire rubber when manufacturing at a high volume—a problem that didn’t appear among test tires handcrafted in-house. In other words, Kevlar couldn’t be plugged directly into the existing manufacturing process among the downstream tire manufacturers such as Firestone or Michelin. The only way to resolve such a technical issue would be for DuPont to forward-integrate and essentially become a tire manufacturer. Alternatively, DuPont could hope for a willing tire company to completely retool its manufacturing plant to take advantage of Kevlar’s unique properties. But none did.

Kevlar therefore remained a scientific curiosity until it came to be used as bulletproof fabric, thanks to this time, the perfect compatibility with existing weaving technologies among the downstream textile manufacturers, like that of W. L. Gore.

One could therefore imagine the difficulty IBM would face when it attempted to sell its cashier-less solution to Walmart. The complexity of such a project that spans across two organizations would only overwhelm all general managers stuck in the middle. To reconfigure the entire retail store layout, the technical discussion would become too complex for conventional contracting between two independent companies.

This is why, at Tesla’s Palo Alto headquarters, visitors would notice the dramatic use of vertical integration. Tesla voraciously integrates in-house wherever the current supply chain underperforms, most noticeably in battery technologies. The company resolves to overcome technical challenges by building stuff in-house.

Although the batteries inside the famous Model S might resemble those found in a laptop, Tesla sought to master battery chemistry. The manufacturing equipment are the same as those used in consumer electronics. Yet this learning-by-doing approach had enabled the company to produce batteries suitable for supercharging vehicles with a coolant running throughout the entire pack. Small tweaks matter. Tesla had turned in-house control of component parts into a real advantage.

This is also why Tesla is building the Gigafactory in Nevada—to further fine-tune the operation and to produce batteries at a scale that far exceeds the capacity of today’s global supply chain, aiming to drive down the production cost at a level the world is yet seen.

It wasn’t because Tesla was unwilling to work with battery suppliers like Panasonic or Samsung. It did in the beginning. But the conflicting priorities and agendas among so many partners would only slow things to a crawl. Direct management and integration, rather than markets and contracting, is the most efficient coordinating mechanism across non-standardized, interdependent activities.

Viewed in this light, Amazon Go is doing just the same.

After some 20 years of relentless assaults on Barnes and Noble, bankrupting Borders, Tower Records, and Circuit City in its wake, the once-online pure-play retailer is now throwing up brick-and-mortar of all sorts, from dozens of pop-up retail sites to the rumored grocery stores and drive-in curbside locations for pickup services. Before Amazon Go, the company already opened its first physical bookstore in Seattle’s University Village in November last year.

But it should be no surprise that Amazon must forge its physical presence when trying to reinvent the future of retailing. Visiting any of Amazon’s bookstores, one would discover the unusual tweaks everywhere: Each book is positioned with its cover exposed, rather than showing the spine, as usually done in a traditional store; small black cards are placed below each book with customer review data pulled from Amazon’s website.

“We love that mixture between creativity and data, and understanding our customers and continually trying to learn how we can make a better store for them,” Jennifer Cast, VP of Amazon Books, told Geekwire last year. But these physical stores are no mere distribution channels; they are research laboratories.

Now Amazon Go is following the same playbook. After some initial experiments with flying drones, air delivery remains a PR stunt at best. Cost issues and consumer acceptance aside, increasing regulations by the Federal Aviation Administration have rendered parachuting fresh meats and vegetables a distant pipedream.

Still, research firm Cowen & Co. estimated that online shopping accounts for less than 4% of the total food and beverages sales. Consumers continue to purchase eggs, milk, fresh meats, and vegetables at local grocers. In contrast to the retail wasteland of books, CDs, and electronics, 80% of the U.S. population can reach a supermarket in less than 2.5 miles from where they live, according to Chicago Tribune. If Amazon were to grow, fresh produce is the next frontier.

But here lies the catch: Breakthrough innovation often requires a reconfiguration of the way a company works. The vision of a cashier-less convenience store is so radical that any corporate partnership will inevitably result in a watered-down version. Without any precedent, detailed specifications are hard to define.

In such a circumstance, where experience is scant, adjustments are frequent, and learning is critical, innovators must bring all operations under one roof. This is why Amazon is building up a position where it can wrap its arms around the entire retail system. IBM, Microsoft, and even Google simply don’t have the requisite technical and commercial scopes to re-architect the retail setting fast enough.

These days, whenever there is a capability an organization lacks, executives often resort to using “partnership” as a cure-all. For a traditional grocer, it is tempting to outsource technologies to third-party providers. And conventional wisdom would suggest that it is generally cheaper and less time-consuming than developing a proprietary solution in-house.

What Jeff Bezos and Elon Musk have taught us is an age-old adage: If you want a thing done well, do it yourself. Partnership works great when it’s plug and play. It fairs badly when deep readjustments of both parties are required.

“I’ve made billions of dollars of failures at Amazon.com. Literally,” Bezos once recounted. “What matters is companies that don’t continue to experiment or embrace failure eventually get in the position where the only thing they can do is make a Hail Mary bet at the end of their corporate existence. I don’t believe in bet-the-company bets.”

To achieve speed and critical learning, sometimes companies have no other choice but to get their hands dirty and build stuff in-house.

Howard Yu is professor of strategy and innovation at IMD business school, based in Switzerland and Singapore. In 2015, Professor Yu was featured in Poets & Quants as one of the Best 40 Under 40 Professors. He received his doctoral degree at Harvard Business School.