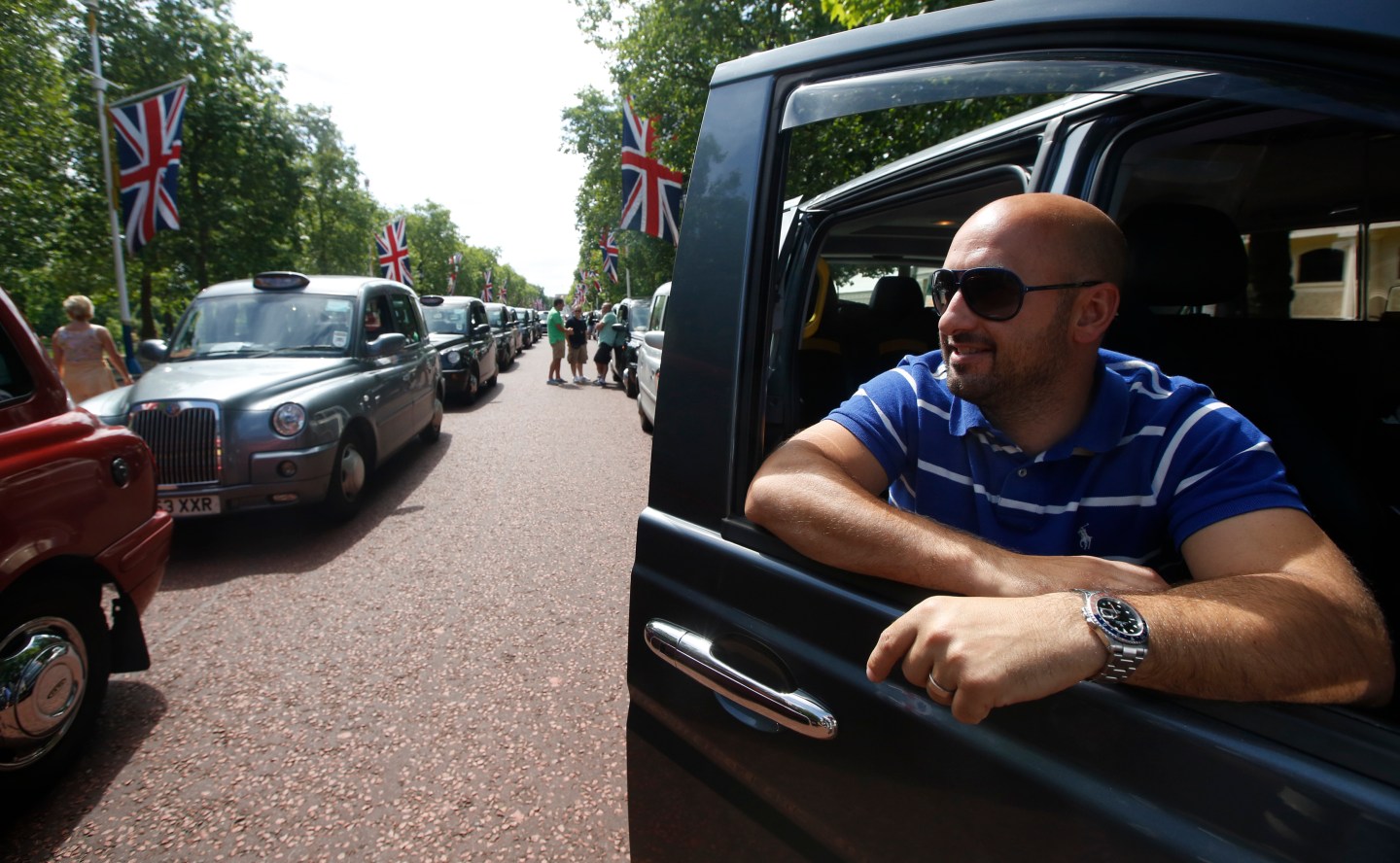 Taxi driver Joe Senatore joins other drivers during a demonstration along the Mall in central London June 11, 2014. Taxi drivers sowed traffic chaos in Europe's top cities on Wednesday by mounting one of the biggest ever protests against Uber, a U.S. car service which allows people to summon rides at the touch of a button. REUTERS/Luke MacGregor (BRITAIN - Tags: TRANSPORT BUSINESS EMPLOYMENT SOCIETY SCIENCE TECHNOLOGY) - RTR3T8OT
Photograph by Luke MacGregor — Reuters

A new report from British Labour MP Frank Field paints a grim picture of wages and working conditions for Uber drivers in the U.K., and urges tighter regulations on the platform. Field, chair of Parliament’s work and pensions committee, based the report on testimony from 83 British private-hire drivers, most from Uber.

Titled “Sweated Labour: Uber and the ‘Gig Economy’”, the report finds that drivers sometimes earned less than 1/3rd of the national minimum wage after expenses like fuel, and had to put in extremely long hours, potentially putting public safety at risk.

“Sweated labour” is a Victorian term, used by an 1890 parliamentary committee to describe work involving long hours, low pay, hard labor, and dangers to workers and the public.

The report identifies three basic problems for Uber drivers: low take-home pay per fare, a surge in driver numbers that is making fares harder to find, and lack of general support from Uber to drivers.

The report notes that many drivers were initially pleased with their earnings through Uber. But persistent declining fares and the rise in Uber’s commission has left many feeling “trapped.” Drivers quoted in the report also speculated that new drivers, who pay the highest commissions to Uber, were given priority for fares.

The report further found that, despite being regulated as independent contractors, drivers do not have true flexibility to determine their own work patterns. Complaints on that front mainly centered on the UberPOOL service, which pays drivers reduced rates. Drivers said that they were effectively forced to accept UberPOOL trips or other undesirable fares, because refusing fares can lock drivers out of the Uber system for set periods of time.

When faced with either on-road emergencies or service problems, drivers said they were often left without support. According to the report, Uber does not provide a live help line to drivers.

Speaking to The Guardian, Uber contested the report’s findings, citing survey results showing that 9 out of 10 drivers were satisfied with their earnings.

For more on Uber regulation, watch our video.

The new report concludes that the conditions it describes are the result of drivers’ classification as self-employed. It argues that drivers deserve to be classified as ‘workers,’ a status between employees and independent contractors, which would give them wage and other protections.

Those recommendations could entail real consequences for Uber, which has about 40,000 drivers in the U.K. In response to a previous report by Field on the delivery company Hermes, which uses a similar contract-labor structure, the British government launched an investigation that is still ongoing.