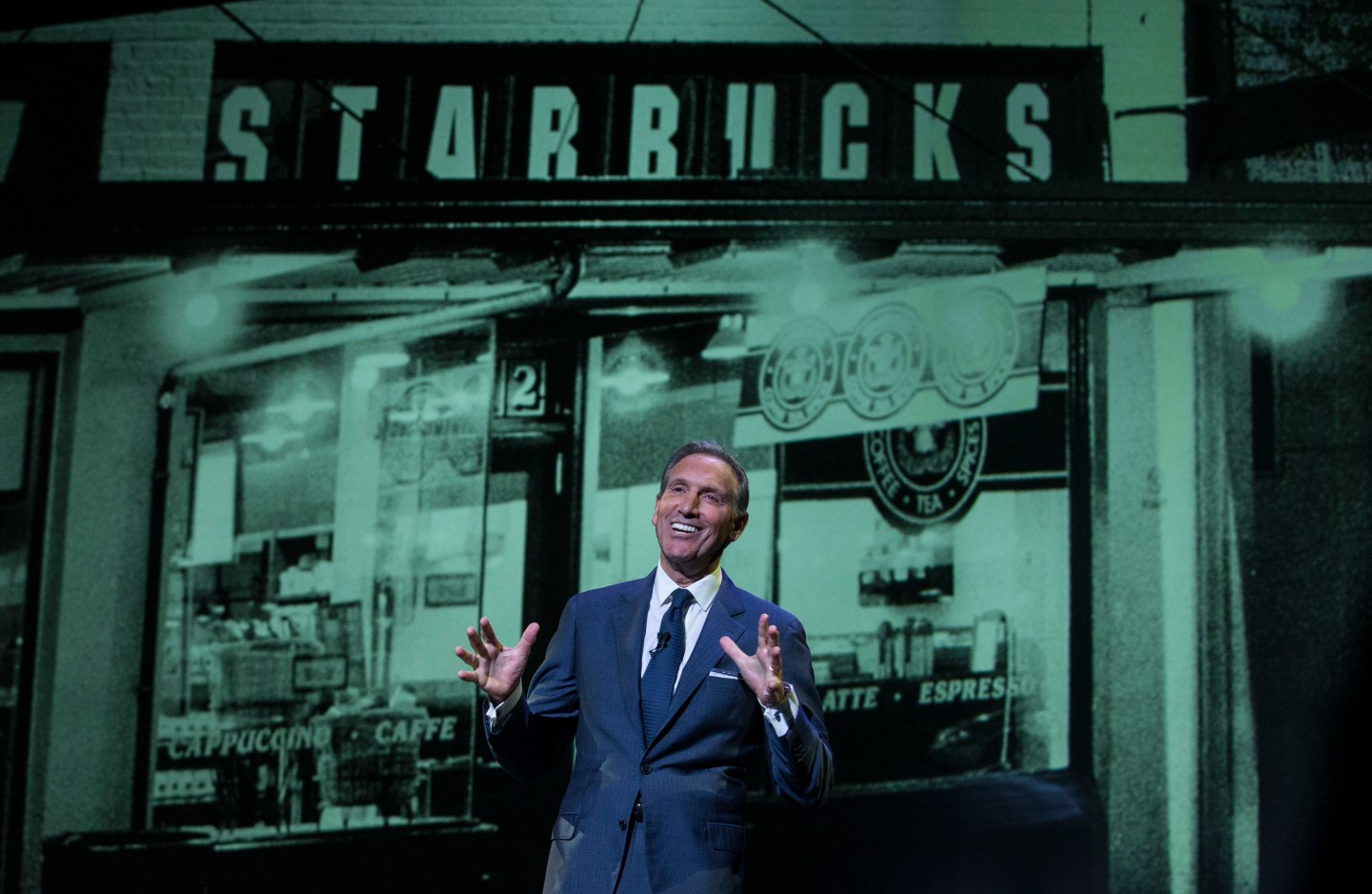 Long-tenured Starbucks CEO Howard Schultz is stepping down next year from that role so he can spend more time focusing on the coffee giant’s push into more premium retail and coffee experiences. So how did Wall Street digest the news?

Starbucks (SBUX) stock slipped in after-hours trading on Thursday and shares were down around 2.5% in mid-day trading on Friday. The news is a jolt as Schultz has long been regarded as the visionary behind the Starbucks brand—getting well-deserved credit for helping greatly boost sales and store count globally in a competitive restaurant industry during his second run as CEO (he previously held the post between 1987-2000).

So what are analysts saying about the change? We’ve compiled some of their comments, which focus both on Schultz’s move and the skills that new incoming CEO Kevin Johnson brings to the table with his tech-focused expertise.

The firm, with a buy rating on the stock, says investor fears that Schultz stepping down—as he did in 2000 only to return in 2008 when the company was in trouble—are overwrought. “We tend to dismiss comparisons to Mr. Schultz’s previous retirement as CEO as we believe the brand, retail offering and customer engagement are all much more established today. This provides us with some confidence that the near and long-term prospects won’t change.”

Bonnie Herzog encourages investors to take advantage of any sell-off in the stock ahead of next week’s Investor Day event, which she believes will help lift shares again. “While we acknowledge that Schultz is without question one of the strongest and most visionary leaders in the consumer/retail world, we believe the succession planning put in place several years ago assures the recent exceptional performance will likely continue.” Herzog adds Johnson’s technology background can help ensure Starbucks investments in mobile and digital remain a primary focus. She rates the stock outperform.

While the bank is “highly reassured” that Schultz will remain actively involved in Starbucks in the near term via his chairman role, “we acknowledge risk that the CEO transition announcement could serve as a precursor to him
becoming less involved over time.” Encouragingly, Baird says Starbucks is well positioned as the firm expects the specialty coffee category to post sales increases at an above-average pace in upcoming years, especially considering the low penetration for specialty coffee (consumed daily by 31% of population) relative to overall coffee consumption (59%).

Calling Schultz “one of the best CEOs we’ve ever covered,” the bank says it is encouraged that the executive will remain actively involved with a new focus surrounding “growing the Starbucks Reserve Roasteries globally, the Reserve store format and social initiatives. As a result, he will no longer be involved in running the day-to-day operations of the company, but will remain an invaluable resource.” Oppenheimer added, “While disappointing to see a visionary and founder step back from day-to-day operations, we believe the company is left in the capable hands of Mr. Johnson. And, we do not believe Mr. Schultz would step away from daily operations without feeling the same way.”

Guggenheim: “Schultz Stepping Aside Again, But is He Leaving on a High Note?”

The bank expressed some concerns Starbucks losing an “irreplaceable merchant,” especially as there are several risks that could pressure the stock, including minimum wage pressures, potential commodity cost increases, and worries sales growth could slow if food and mobile’s contribution to the top line loses momentum. Guggenheim also notes that new CEO Johnson previously served as CEO of Juniper Networks (JNPR) for five years between late 2008 through early 2014. What’s worrisome? The stock appreciated 24% over that period, underperforming the 91% increase for the S&P 500.

BMO Capital Markets: “Optimistic This Leadership Transition Will Be Different Than the Last”

Like many other Wall Street observers, BMO referenced the concerns about leadership transition after Schultz had to swoop back in to save the Starbucks brand in 2008. The bank says it is less worried about this succession because Johnson has been “co-authoring” the Starbucks strategy since becoming COO in 2015 and “his near-term focus likely will be on executing the already established strategy as he becomes increasingly acclimated to the CEO role. BMO advises investors keep an eye on the Starbucks Investor Day on December 7. “Management intends to share details for reserve stores, including the launch of a new product category,” the bank said.