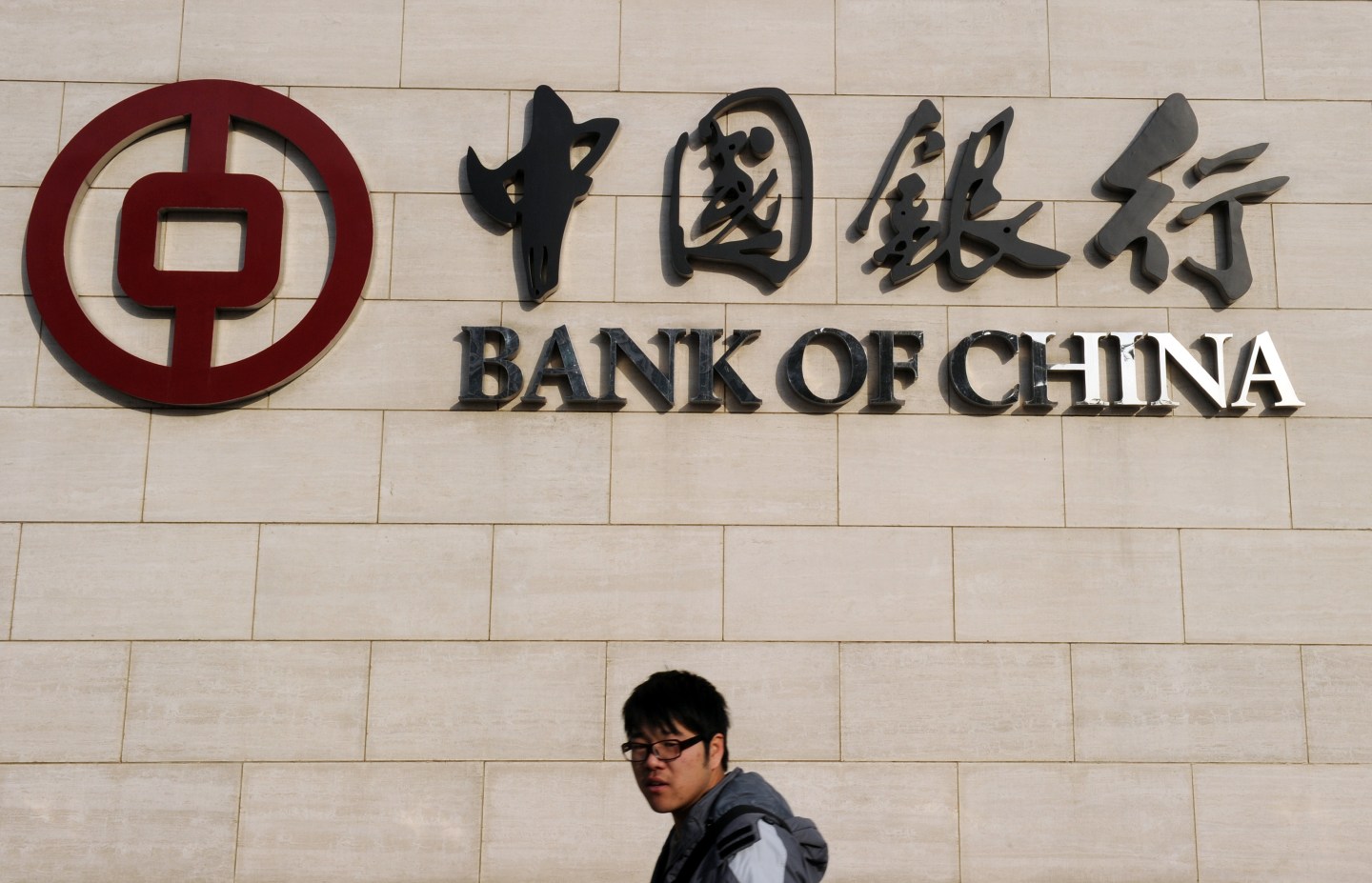 A man walks past the Bank of China headquarters in the Xidan shopping area of Beijing on December 1, 2011. China said it will cut bank reserve levels for the first time in three years to help boost lending and spur growth to counter alarming signs of a domestic slowdown and the crisis in key export markets. The move, which takes effect on December 5, is the strongest signal yet that the government wants to ease tight credit restrictions put in place to curb surging inflation and property prices -- now showing signs of easing. . AFP PHOTO/Mark RALSTON (Photo credit should read MARK RALSTON/AFP/Getty Images)
MARK RALSTON/AFP/Getty Images

Bank of China, one of the country’s “Big Four” state banks, has begun to sharply limit corporate customers’ ability to purchase foreign currency in Shanghai, in what sources said on Friday was a bid to help stem capital outflows and ease depreciation pressure on the yuan.

Under the unwritten new policy, described by two sources familiar with the details, bankers at China’s fourth-biggest lender began this week to discourage companies wishing to change yuan into dollars.

Those firms which insisted on doing so were told they would be restricted to exchanging a maximum of $1 million. Previously, there had been no restrictions on companies’ forex purchases.

The policy comes as China’s government adopts increasingly aggressive measures to control movements of yuan out of the country and snuff out expectations that the currency would continue to spiral lower.

It has already lost nearly 6% against the resurgent dollar so far this year, taking it to more than eight-year lows.

“All preferential policies regarding forex purchases have been canceled,” said one of the sources, who declined to be identified by name because she was not authorized to speak publicly.

The source said the rules only applied to Bank of China’s Shanghai operations, but that other locations were free to set their own corresponding policies.

Neither Bank of China nor the State Administration of Foreign Exchange (SAFE), which oversees China’s forex policy, had an immediate comment.

Bank of China’s Shanghai operations were “starting to strictly control forex purchases… and have imposed restrictions on forex purchases worth $1 million or more,” the second source said.

One source described the policy as “voluntary,” while the other said it had come from SAFE.

Either way, the measures appeared to be an escalation of the government’s war on outflows after SAFE earlier this week started vetting transfers abroad worth $5 million or more and increased scrutiny of major outbound deals.

While limited in scope, the bank’s Shanghai foreign exchange restrictions are more than just a symbolic step.

Bank of China was once the only Chinese bank authorized to conduct foreign exchange transactions, and remains the country’s biggest trader of foreign currency. It has more overseas branches than any other Chinese bank.

At least one other bank was adopting similar measures to curb foreign exchange sales.

An official at a mid-sized shareholding bank in Shanghai, who declined to be identified, said the lender had suspended all forex purchases. It was also preventing individuals from transferring foreign currency to their relatives, taking aim at a common workaround to take money overseas.

Capital outflows have grown as a concern this year for the government as it attempts to put the economy back on track and keep the currency stable without exhausting its foreign exchange reserves.

Last week, a senior central bank researcher warned that the fall in the yuan’s exchange rate was shaping market expectations of further losses and triggering capital flight, and that it was necessary to “break this feedback loop.”

Underscoring the risks, China’s foreign exchange reserves fell $45.7 billion – the most in nine months – in October and by far more than expected to the lowest since March 2011, indicating further capital outflows despite recent signs that the world’s second-largest economy was stabilizing.

The central bank is widely believed to have sold U.S. dollars to cushion the yuan currency’s descent in October.

On Friday, state banks sold dollars in the market for a fifth straight day on Friday, helping keep the yuan steady at around 6.88 to the dollar.

November’s foreign exchange reserves data is due out next Wednesday.

A Reuters poll of more than 50 foreign exchange analysts this week suggested that the yuan would likely slip to 6.90 per dollar by the end of this month, and then depreciate steadily to 7.14 in a year, which would mark its lowest level in nearly a decade.