How Trump Could Embolden Cuba’s Hardliners 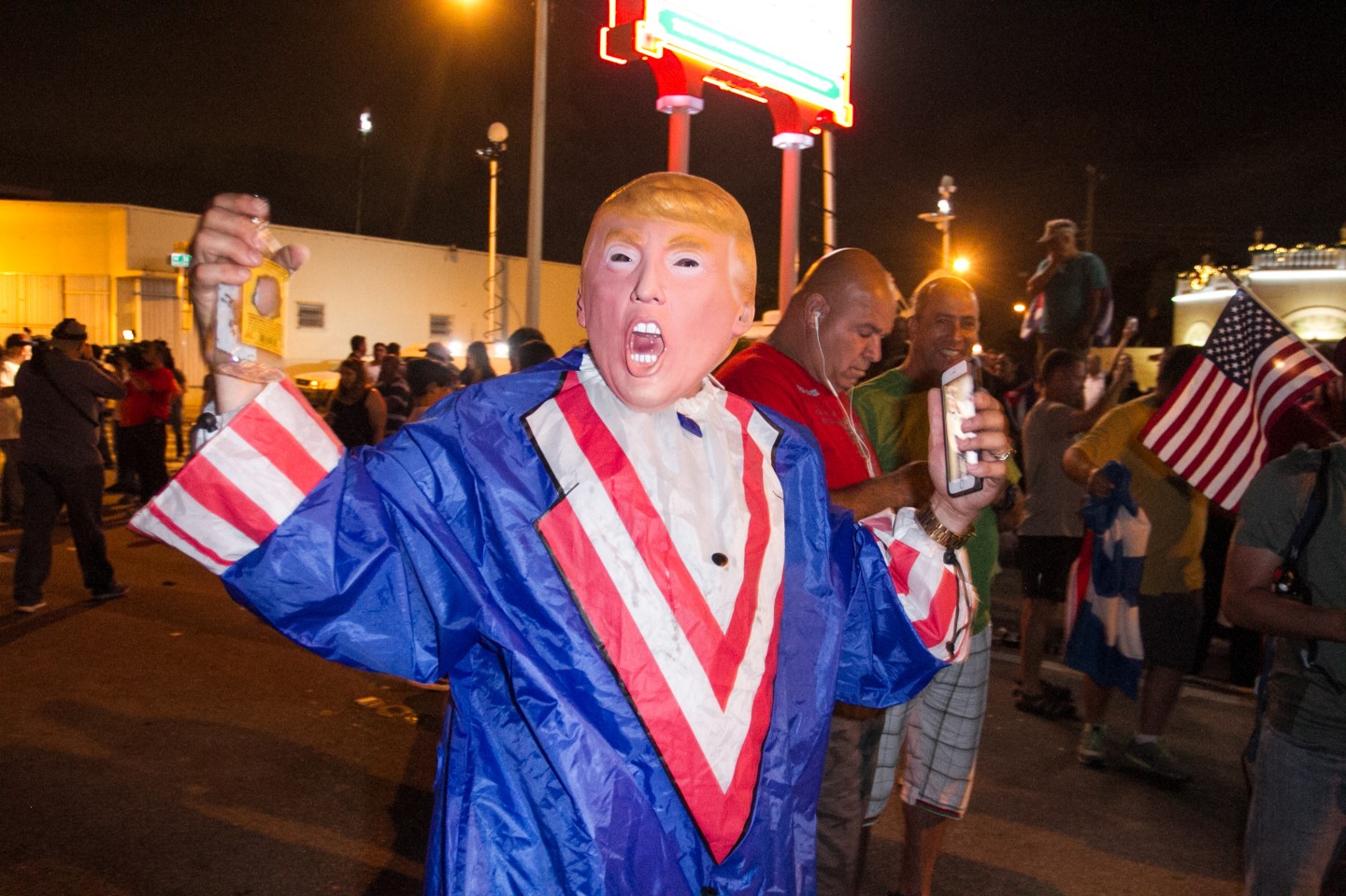 MIAMI, FL - NOVEMBER 26: Cuban Americans celebrate upon hearing about the death of longtime Cuban leader Fidel Castro in the Little Havana neighborhood of Miami, on November 26, 2016 in Miami, Florida.. Cuba's socialist icon and father of his country's revolution Fidel Castro died on November 25 aged 90, after defying the US during a half-century of ironclad rule and surviving the eclipse of global communism. (Photo by John Parra/Getty Images)
John Parra—Getty Images

Since former Cuban President Fidel Castro’s death last Friday, Donald Trump has insulted the longtime leader and pledged to reverse the 2014 agreement to normalize relations between Cuba and the U.S.

In the wake of Castro’s death, the president-elect tweeted: “If Cuba is unwilling to make a better deal for the Cuban people, the Cuban/American people and the U.S. as a whole, I will terminate deal.”

It remains to be seen how Trump will approach relations with Cuba when he takes office in January. If he takes a harsher stance, Trump may end up emboldening Cuba’s hardliners, who are already skeptical of democratic reforms and closer ties with their northern neighbor, say Cuba experts.

“If the new policy the Trump administration assumes is to increase the fire under [the Cuban leadership’s] feet, it’s going to send them back to the bunkers,” says Carlos Saladrigas, founder and chairman of the Cuba Study Group, an association of mostly Cuban-American business professionals that advocates for a free and open society and market-based economy in the communist state. “The uncertainty that’s been created with Fidel’s death is going to throw a bucket of cold water on reforms until they see a more definitive track emanating from the U.S.”

Since 2008, current Cuban President Raul Castro, Fidel’s brother, has instituted market-based economic reforms on the island—such as encouraging private companies and inviting foreign direct investment—and led the effort to open up relations with the U.S. Castro, who draws much of his legitimacy from fighting alongside his brother in the 1959 Cuban Revolution, has pledged to step down in 2018. If he does, his successor will not have the same credibility with conservative elements of Cuba’s Communist Party.

“The nationalism of the Cubans vis-a-vis the United States suggests that whoever is in office post-Raul Castro, if he or she is dealing with a tough hardline Washington, is going to respond with a tough hardline towards Washington, and have to manage domestically the skeptics about this opening [with the U.S.],” says Julia Sweig, CBS news analyst and author of the book, Cuba: What Everyone Needs to Know.

Trump would be capable of reversing nearly all of the U.S.-Cuba thaw as soon as he takes office, including closing the newly opened U.S. Embassy in Havana. The normalization agreement, which President Obama brokered with the help of Pope Francis, eases travel and trade restrictions between the two countries and allows for easier transmission of remittances. Saladrigas worries that if the Trump administration pulls the plug, he’ll stunt the momentum generated by Castro’s economic reforms and the development of Cuba’s burgeoning civil society.

And from outside the island, international businesses are looking to gain a foothold in the potentially lucrative, if not yet fully profitable, Cuban market. Airbnb is investing in Cuba as a tourist destination that promises an authentic cultural experience, U.S. airlines are running regularly scheduled flights to Havana, and earlier this year, Starwood Hotels and Resorts signed three hotel contracts on the island.

Sweig says that to reverse course and return to the previous policy of tough talk and isolation would be at odds with Trump’s stated vision of promoting freedom on the island.

“The open society, freedom, market capitalism vision that [the Trump team] purportedly support[s] is actually in its incipient stages already in Cuba,” she says. “And they can shut that down if they want to go back to the past.”

For now, Sweig says that Havana is likely to wait on Trump to make the first move. “They’re not going to react publicly [to Trump]. They’re going to wait until they’re dealing with President Trump, not President-elect Trump.”

As with many of his policy positions, the president-elect has expressed different stances regarding Cuba at different times since beginning his campaign.

“Trump ran in the Republican primary against the Cuban-American establishment icon in Marco Rubio,” says Arturo Lopez-Levy, a political science professor at the University of Texas Rio Grande Valley, suggesting that Trump would take a more lenient view on Cuba. During the primary, Trump said of the agreement, “I think it’s fine, but we should have made a better deal.”

However, Lopez-Levy continues, the appointments of Lt. Gen. Michael Flynn as national security advisor, and of former New York City Mayor Rudolph Giuliani and Mauricio Claver-Carone, executive director of an advocacy group with hawkish positions toward Cuba, to the transition team, could indicate that the president-elect plans to take a harder tack on the communist country.

“The more I see these type of people entering his team, the more suspicious I get about where this is going,” Lopez-Levy says. “It was very virulent, his statement on the death of Castro. It’s a statement that either he’s creating for himself some space for maneuvering, which would be good, or simply that he’s buying the rhetoric of others.”

According to Sweig, the transition appointments are less predictive of Trump’s forthcoming Cuba policy than is his tendency to upset the Washington DC consensus that solidified under Barack Obama.