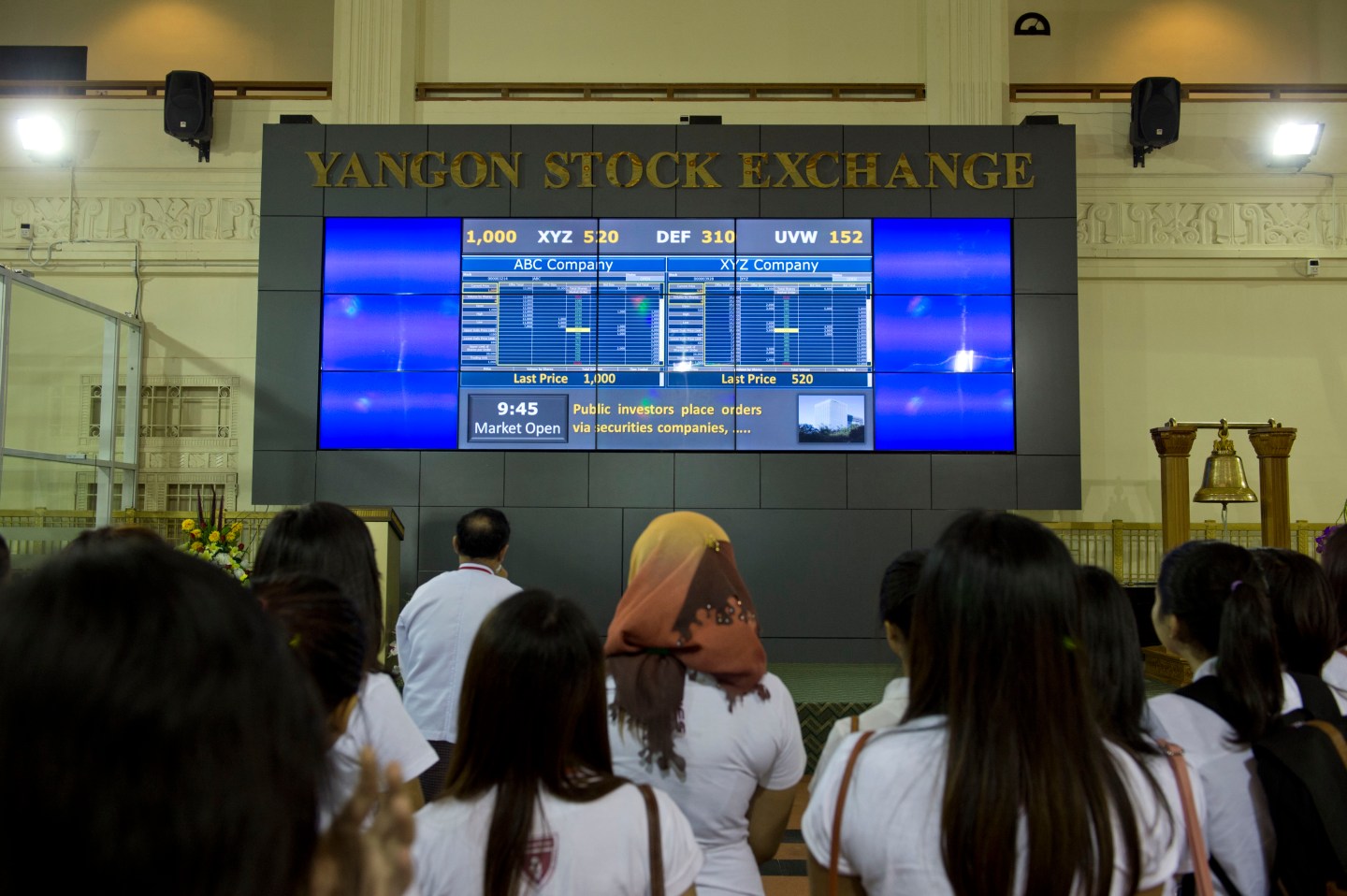 From a remote corner of northeastern Myanmar, an insurgent army sells tin ore to suppliers of some of the world’s largest consumer companies.

More than 500 companies, including leading brands such as smartphone maker Apple (AAPL), coffee giant Starbucks (SBUX) and luxury jeweler Tiffany & Co (TIF), list among their suppliers Chinese-controlled firms that indirectly buy ore from the Man Maw mine near Myanmar’s border with China, a Reuters examination of the supply chain found.

The mine is controlled by the United Wa State Army (UWSA), which the United States placed under sanctions for alleged narcotics trafficking in 2003. The seven companies extracting tin from the mine are all owned or controlled by Wa military and government leaders, Wa officials and people with close ties to UWSA leadership told Reuters.

This potentially puts companies, which also include industrial conglomerate General Electric @General Electri(GE), at risk of violating sanctions that forbid “direct or indirect” dealings with blacklisted groups, according to a former and a serving U.S. official and lawyers with expertise in sanctions enforcement.

Several sanctions experts said the U.S. government was unlikely to fine companies who unwittingly used the Myanmar tin. Still, it may force them to shift to new suppliers, they said.

A Treasury Department spokeswoman said U.S. sanctions “generally prohibit U.S. companies from engaging in any direct or indirect transactions or dealings with individuals or entities” on a blacklist, but declined further comment on specific circumstances.

The situation illustrates the difficulties facing multinationals in monitoring supply chains that have grown increasingly complex.

Following a 2012 U.S. regulation, companies have spent billions of dollars scrutinizing whether certain minerals used in their products come from mines controlled by armed groups in Central Africa.

But the regulations do not require them to assess the origins of minerals from other conflict zones.

Apple, Tiffany and GE, and other companies contacted by Reuters, said that to fulfill those regulations they looked to an audit program designed by the industry group Conflict Free Sourcing Initiative (CFSI).

A CFSI program director said the group was “aware of tin exports from Myanmar to other countries and of security and human rights issues in Myanmar.” The group said it was updating its audit requirements to include “a broader definition of conflict-affected and high-risk areas.”

Tin supply chain expert at monitoring group Global Witness, Sophia Pickles, said companies must not wholly outsource due diligence responsibility to a scheme that has exclusively focused on central Africa.

“Companies, not schemes, bear the primary responsibility for ensuring that supply chains are responsible,” she said.

Most of the tin mined globally is used as solder in electronics, for making batteries and plating.

The Man Maw mine roiled the global tin market when huge quantities of high-grade ore were discovered around 2013. Annual production is now estimated at about 33,000 tons of tin concentrate, more than a 10th of global output of the metal.

The mine is controlled by the UWSA, the strongest of the myriad armed groups that have kept Myanmar in a state of near-perpetual civil war for decades. Reuters visited the remote mine last month, the first international media organization to do so.

Interviews with officials running the mine, UWSA leaders and executives at Asian tin suppliers, together with an examination of public disclosures of suppliers made by companies in regulatory filings, indicate Wa tin likely ends up in an array of products made by U.S. and other international companies.

Tin from Man Maw provides revenue critical to the survival of the self-proclaimed Wa State and its rulers, who have refused to disarm or participate in Myanmar’s peace process.

“There are dozens of trucks carrying tin ore to China every morning,” the head of the Wa territory foreign affairs office, Zhao Guo An, told Reuters. “Tin mining is the pillar of our economy. It’s the biggest source of income.”

While Washington has lifted most sanctions on Myanmar, some have been kept in place, including those aimed at the UWSA. The group and several of its leaders are blacklisted under the Kingpin Act over accusations of trafficking in heroin and methamphetamine. UWSA leaders deny involvement in narcotics, saying the accusations are a smear by political opponents.

Peter Kucik, a former senior sanctions advisor at the U.S. Treasury Department, said the findings highlighted the need for thorough due diligence.

Two companies in Apple’s supply chain, the world’s No. 1 tin producer Yunnan Tin Co and leading Taiwan-based solder maker Shenmao Technology, told Reuters that some tin they bought was from the Wa mine.

Mandy Gan, a tin analyst from China’s leading mineral research company, Asian Metal, and another tin expert, both of whom visited the UWSA mine this year, said many other Chinese smelting firms supplying global consumer goods makers also bought tin from the Man Maw mine.

Sanctions experts said even the indirect use of the tin might be considered a violation of U.S. sanctions law, which does not require authorities to prove intent. A U.S. government official involved in Myanmar policy consulted on Reuters’ findings said the government was likely to investigate any ties to the UWSA.

Still, Washington-based sanctions attorney Erich Ferrari said it was unlikely the Treasury Department would initiate an enforcement action against companies for an issue so deep in the supply chain. Once the ties were publicized, however, authorities could impose penalties if the companies did not wind down the transactions and find new suppliers, he said.

The chain connecting some of the world’s best-known brands with a mine in one the most inaccessible corners of Southeast Asia has many links.

One key intermediary is state-owned Yunnan Cultural Industry International (YCII), based in Yunnan, southwestern China, which said in a statement on its website that it enjoys “a long-term, stable strategic partnership” with the UWSA statelet.

YCII is, in turn, a major supplier of tin to the world’s top producer, Yunnan Tin, also based in Yunnan.

Yunnan Tin supplies many companies, including big contract manufacturers such as Foxconn Technology and, indirectly, Pegatron, whose clients include Apple. It also supplies major solder makers such as Shenmao Technology, also a supplier to Pegatron.

“Myanmar is not considered a conflict-affected area by CFSI…As long as smelters present a certified sourcing document, that’s acceptable for us,” said Tim Lin, an executive overseeing sourcing at Taiwan-based Shenmao, who said about a quarter of its supply of the metal came from Yunnan Tin.

In the last two years, Yunnan Tin has also shipped more than 12,000 tons of metal to the United States, according to shipment data from U.S.-based trade tracking company Panjiva.

More than 500 publicly traded companies in the United States say their suppliers use tin from Yunnan Tin or Yuntinic Resources, its San Mateo, Calif.-based division, according to a review of the supply chain disclosures consumer companies make to the U.S. Securities and Exchange Commission.

Two members of Yunnan Tin’s board, vice chairwoman Yang Yimin and secretary and vice general manager Pan Wenhao, confirmed in interviews that a “portion” of the company’s tin came from the UWSA-operated mine.

“We certainly buy tin indirectly from Myanmar,” Pan told Reuters. “We don’t specifically pay attention to where they source their materials from.”

Yunnan Tin mixes the Wa tin with metal from mines in central and southwestern China, said Pan, before processing it into products such as tin paste.

That means it is impossible to say for certain which shipments from the company contain Wa tin, but Pan estimated Yunnan Tin’s purchases from the mine account for about a third of its total annual tin consumption, or at least 16,500 tons.

Apple said in a statement it worked with suppliers to help them meet stringent standards, “and those who are ultimately unable or unwilling to comply are removed from our supply chain.”

“While we have no evidence of illegal tin from Myanmar in our products, we’ll continue to investigate, address any issues we find and do all we can to raise standards and protect human rights,” it said.

Foxconn said it “enforced stringent supplier management requirements in accordance with international and local conflict minerals legislation and has proactively communicated these requirements to our suppliers.”

It added that less than 1 percent of its tin was procured from Yunnan Tin, all of which was used in products for a “single, non-U.S.-based customer.”

Pegatron said it carried out “annual due diligence on suppliers and encourage them to source from validated conflict-free supply chains.”

“Pegatron will continue working with customers and international organizations to investigate and source minerals responsibly,” the company added.

From Jewelry to Appliances

Companies that sell consumer products in the United States are required by the Dodd-Frank Act to publish their suppliers of tin and other minerals.

Among the companies listing Yunnan Tin, Tiffany said one of its suppliers had indirectly sourced a “very small amount of tin” from the Chinese smelter for use in silver solder for jewelry and hollowware.

The company added that, as Yunnan Tin was certified as conflict-free by the CFSI, “use of this smelter by our vendors is consistent with our Conflict Minerals Policy.”

Starbucks said small amounts of Yunnan Tin metal, sourced from second or third party suppliers, went into the ovens in its coffee shops.

The company had received no information indicating it was using minerals from Myanmar, a spokeswoman said, but was pushing suppliers for more detailed sourcing disclosures.

A GE spokesman said the company strived to use ethical sourcing in its mineral supply chain, adding it had “noted the concerns raised by Reuters and will address them through our internal process and with our external partners.”

A spokeswoman from discount retailer Target (TGT) said in a statement it was “committed to responsible business conduct.”

“We take these allegations very seriously, and we are looking into this,” the statement said.