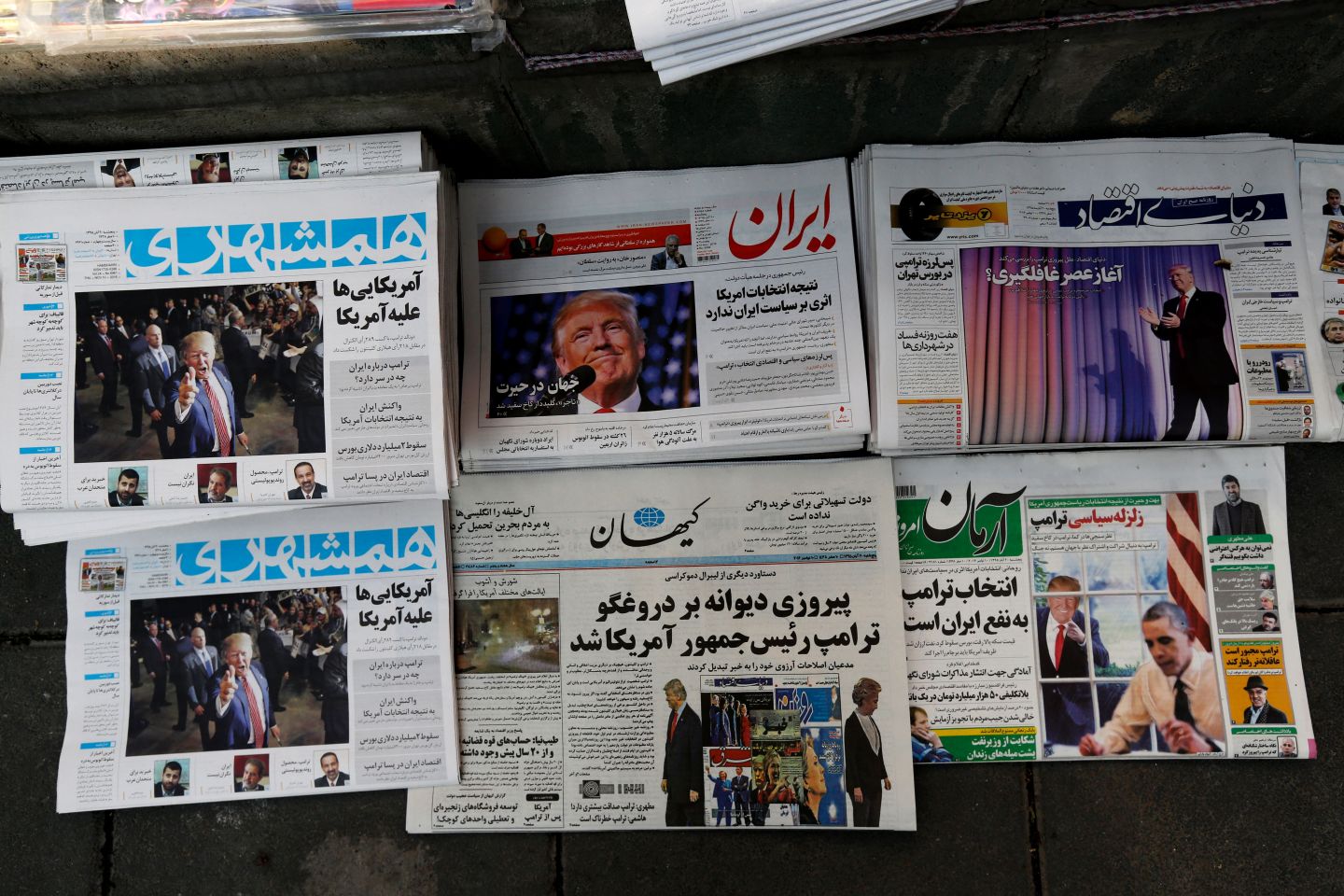 A picture taken on November 10, 2016 in the Iranian capital Tehran shows local newspapers displaying articles on US president-elect Donald Trump a day after his election. Iran's President Hassan Rouhani said on November 9 there was "no possibility" of its nuclear deal with world powers being overturned by US president-elect Donald Trump despite his threat to rip it up. / AFP / ATTA KENARE (Photo credit should read ATTA KENARE/AFP/Getty Images)
Atta Kenare—AFP/Getty Images

Much of President-elect Donald Trump’s foreign policy agenda is still taking shape. This is certainly true when it comes to the Iran nuclear deal, otherwise known as the Joint Comprehensive Plan of Action (JCPOA), which aims to prevent the Islamic Republic from seeking a nuclear weapon by placing limits on Tehran’s nuclear activities for 15 years in exchange for providing Iran relief from most international sanctions. While on the campaign trail, Trump was a consistent and harsh critic of the agreement, and has advocated either renegotiating the deal or scrapping it altogether.

As president, Trump is highly unlikely to be persuaded by a recently signed letter from 76 pro-JCPOA former senior policymakers and academics arguing for the merits of preserving the nuclear deal as is. Trump will want to get to a better deal than what he is inheriting and tackle the agreement’s gravest problems, including an inspections regime that does not allow access to suspect military sites and the short “sunset” timelines that could give Iran an industrial-sized program by the end of the next decade.

Who Trump finally selects for his full foreign policy team will provide perhaps the best clues for how he will approach the JCPOA. The choices so far of retired Lieutenant General Michael Flynn for national security advisor and Rep. Michael Pompeo for CIA director (Pompeo says he wants to roll back the JCPOA) indicate Trump’s intent to change the deal in a deliberate manner. Many structural issues within the JCPOA—and geopolitical factors at play since its implementation—will most likely push Trump to seek revised terms through raising the stakes with the Iranians within the existing framework before taking any massive diplomatic gambles.

First, the Iranians have already accrued the majority of their benefits from the JCPOA— namely nuclear sanctions relief—up front. The U.S., in contrast, does not see its gain from the deal—preventing a nuclear weapon, if Tehran sticks to its terms—until the end. If Trump wants a realistic shot at a new deal, he would need to be sure the Europeans, Russians, and Chinese are on board with reimposing oil embargoes, financial transaction restrictions, and other similar types of the painful sanctions that finally brought Iran to the table in 2013. Those are far from certain propositions. Otherwise he risks walking away with little or nothing to show for America’s trouble.

Second, Trump will also be aware that any major confrontation with Iran over the JCPOA must be considered in context of his policies toward Russia and vice-versa. Russian President Vladimir Putin did not, and still does not, want Tehran to get the bomb. Moscow, however, has used the nuclear deal in part to carve out a much more significant role in the Middle East, including a burgeoning new military alliance with Iran in Syria and elsewhere. These circumstances likely limit the degree of coercive diplomatic or even military power the United States could use in any renegotiation, unless Russia is on board with the White House’s game plan.

Third, the administration’s initial review of the JCPOA will offer Trump an excellent opportunity to reevaluate U.S. intelligence assessments on Iran’s nuclear program and determine whether Tehran is indeed fully adhering to the precise terms of the nuclear deal. The most recent reports from International Atomic Energy Agency (IAEA) show that adherence appears to be increasingly a matter of interpretation. As opposed to the Obama administration, Trump may not find Iran’s regular bypassing of limits on its heavy water production to be acceptable, and declare Tehran formally in abrogation of the JCPOA. Placing the onus on the Islamic Republic for breaking the deal, rather than on the U.S., will be a much more attractive way to create leverage.

Fourth, Trump will find that he has numerous options to ratchet up economic stress on Iran while keeping the basic deal intact. The outgoing administration has been toning down U.S. sanctions enforcement for Iran’s support for terrorism and human rights abuses in order to encourage foreign direct investment in Iran during JCPOA implementation. Trump could easily reverse those policies and sign new, non-nuclear sanctions bills from Congress, like the Iran Nuclear Agreement Review Act. Tehran would protest that these moves violate the spirit of the JCPOA, but it is unlikely Iran would end the agreement over them.

With enough pressure on Iran, Trump may be able to get some concessions on the deal, such as additional inspections or tightening of the sunset clauses. The president should remain realistic, though, and also be prepared for significant pushback from Iran in the counter-ISIS fight and from Russia. Our European allies, too, may be unenthused about their years of diplomatic work being put at risk.

The more intriguing question is where Trump will go if this incremental path does not work. Does he take the plunge and simply pull the plug on the deal? Again, only if there do not appear to be other ways of fixing the JCPOA’s problems.

What could be potentially tempting for Trump is to go for carrots in addition to sticks. In exchange for a much tighter inspection regime and stronger, more verifiable long-term guarantees to never seek a weapon, Washington could offer much more significant economic concessions, including revamping the U.S. embargo against doing direct business with Iranian companies. Putin, Chinese President Xi Jinping, and German Chancellor Angela Merkel were certainly motivated by the potentially lucrative contracts for their countries’ companies that would come from a nuclear deal, in addition to their collective desire to keep Iran from getting the bomb.

The U.S., of course, gained almost nothing financially from the JCPOA in contrast to its economic competitors in Europe and Asia. For a president ostensibly focused first and foremost on job creation, Trump may see a win-win in offering the chance for American businesses to sell their goods in the Iranian market while improving the terms of the agreement.

There would likely still be huge political obstacles in both Washington and Tehran for such a shift in policy, especially if current Iranian Supreme Leader Ayatollah Ali Khamenei is still alive. But Donald Trump prides himself on his mastery of deal making. This would be his biggest.

J. Matthew McInnis is a resident fellow at the American Enterprise Institute.