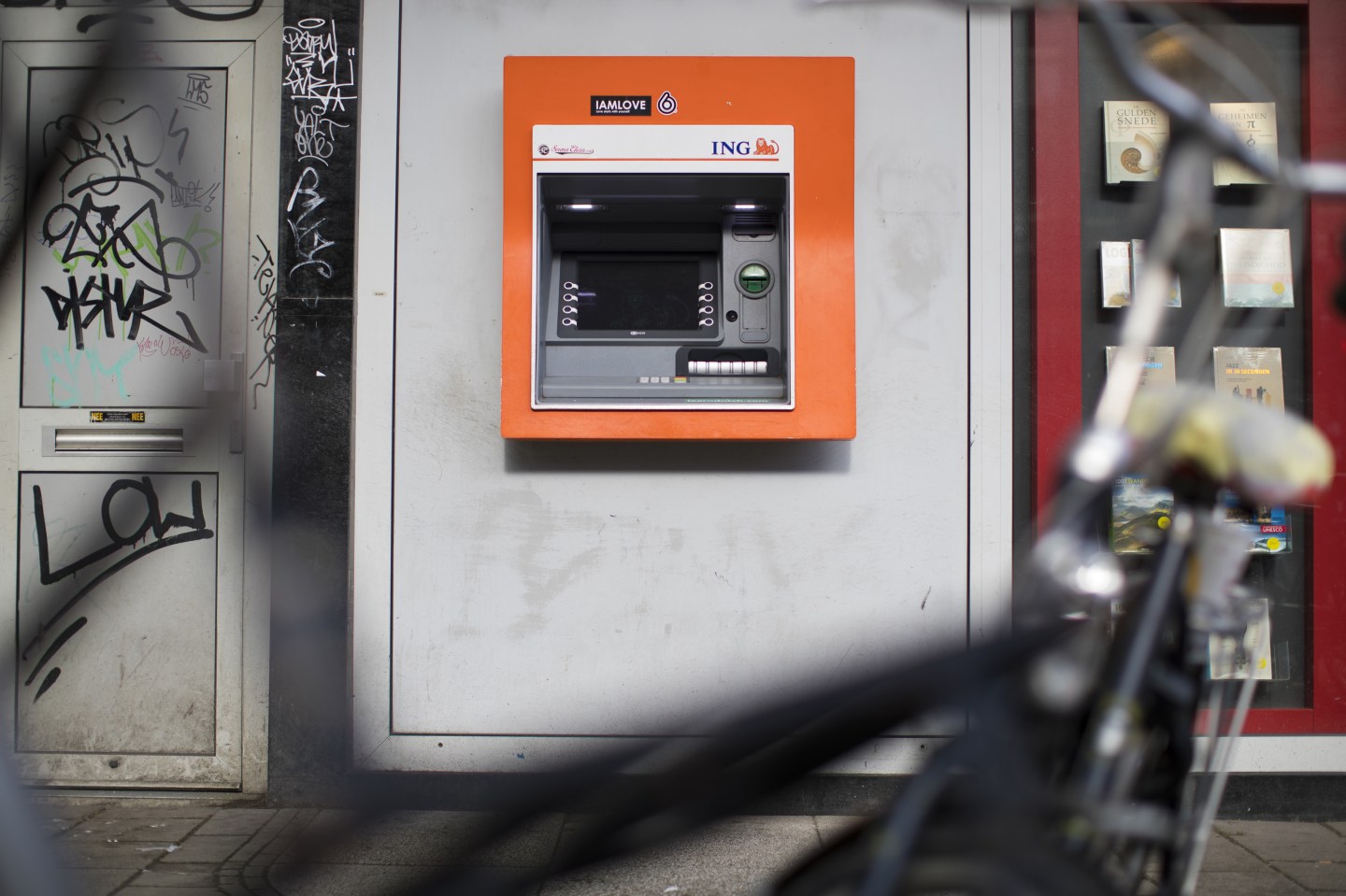 An automated teller machine (ATM) sits outside an IMG Groep NV bank branch in Amsterdam, Netherlands, on Monday, Oct. 3, 2016. ING plans to cut about 5,800 jobs in Belgium and the Netherlands over five years to reduce costs as the Dutch lender accelerates its digital transformation. Photographer: Jasper Juinen/Bloomberg via Getty Images
Jasper Juinen — Bloomberg via Getty Images

Cyber criminals have remotely attacked cash machines in more than a dozen countries across Europe this year using malicious software that forces machines to spit out cash, according to Russian cyber security firm Group IB.

Diebold Nixdorf and NCR, two of the world’s biggest ATM makers, said they were aware of the attacks and have been working with customers to mitigate the threat. The newly disclosed heists across Europe follow hacks of ATMs in Taiwan and Thailand, which were widely reported over the summer.

Group IB declined to name banks that were “jackpotted,” a term used to describe forcing ATMs to spit out cash, but said the victims were located in Armenia, Belarus, Bulgaria, Estonia, Georgia, Kyrgyzstan, Moldova, the Netherlands, Poland, Romania, Russia, Spain, the United Kingdom, and Malaysia.

Hackers have moved from stealing payment card numbers and online banking credentials to more lucrative hacks on bank networks, giving them access not only to ATM machines, but also to electronic payment networks.

A February attack on servers at Bangladesh’s central bank that controlled access to the SWIFT messaging system yielded more than $81 million in one of the biggest digital heists on record. Russian banks lost over $28 million in a series of wire-fraud cases that were identified earlier this year.

“What we are seeing demonstrated is the new model of organized crime,” said Shane Shook, an independent security consultant who helps banks and governments investigate cyber attacks and reviewed Group IB’s findings.

“We have been working actively with customers, including those who have been impacted, as well as developing proactive security solutions and strategies to help prevent and minimize the impact of these attacks,” said Owen Wild, NCR’s global marketing director for enterprise fraud and security.

Hackers remotely infected ATMs at both banks, forcing them to spit out cash that was collected by teams of “money mules,” who authorities say traveled to Asia from Eastern Europe.

The U.S. Federal Bureau of Investigation earlier this month sent a private alert to American banks, warning them to be on the lookout for attacks on ATMs following the heists in Taiwan and Thailand, the Wall Street Journal reported on Monday.

An FBI spokesman declined to comment on the attacks in Europe.

Group IB said it believed the attacks across Europe were conducted by a single criminal group, which it dubbed Cobalt.

It named them after a security-testing tool known as Cobalt Strike, which the perpetrators used in the heists to help them move from computers in the bank network that were infected with tainted emails to specialized servers that control ATMs.

Cyber criminals have been attacking cash machines for at least five years, though early cases were limited to small numbers of ATMs.

Hackers have traditionally required physical access to cash machines, making it tougher to steal large sums, said Shook, the independent security consultant. They are now using methods like the Cobalt gang, enabling them to attack larger numbers of machines in “smash and grab” operations, he said.

Group IB believes that Cobalt is linked to a well-known cyber crime gang dubbed Buhtrap, which stole 1.8 billion rubles ($28 million) from Russian banks from August 2015 to January 2016, because the two groups use similar tools and techniques.

Representatives with Europol, which coordinates investigations of cyber crimes across Europe, had no immediate comment.