3 Things the Trump Organization Must Do to Survive 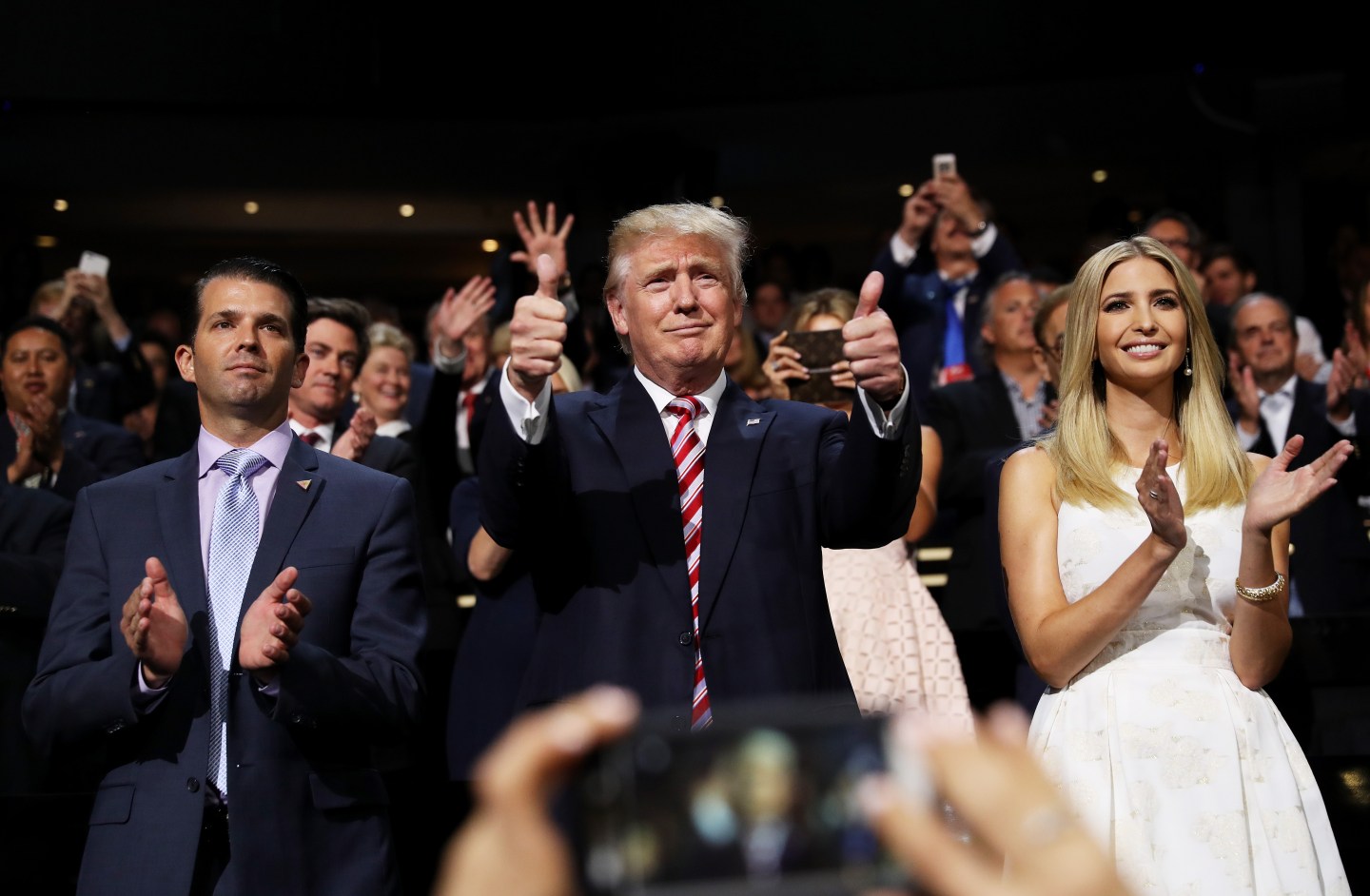 CLEVELAND, OH - JULY 20: Republican presidential candidate Donald Trump (C) gives two thumbs up as Donald Trump Jr. (L) and Ivanka Trump (R) stand and cheer for Eric Trump as he delivers his speech during the third day of the Republican National Convention on July 20, 2016 at the Quicken Loans Arena in Cleveland, Ohio. Republican presidential candidate Donald Trump received the number of votes needed to secure the party's nomination. An estimated 50,000 people are expected in Cleveland, including hundreds of protesters and members of the media. The four-day Republican National Convention kicked off on July 18. (Photo by Joe Raedle/Getty Images)
Joe Raedle—Getty Images

The 2016 presidential campaign has dramatically boosted Donald Trump’s reputation, enhancing his visibility, cultivating intense loyalty among his followers, and ensuring his place as one of the most powerful people in the world.

During a recent 60 Minutes interview, Trump’s daughter Ivanka shrugged off the suggestion that the divisive race had harmed her family’s brand. “I don’t think it matters,” she told Lesley Stahl. “[Trump’s election] is so much more important. And more serious.”

But it’s hard to deny that the Trump name—previously so appealing to luxury consumers—took a pounding during the campaign. In the aftermath of his polarizing comments, Macy’s stopped selling Trump merchandise, as did the Middle East’s largest home retail chains. NBCUniversal, Univision, Nascar, and Serta mattresses cut ties with him, and residents of Trump Place in New York City even launched a petition this fall to rename the building.

During the two-month transition before he’s sworn in, Trump is frantically working to transfer control of his business interests to his three oldest children, removing himself from day-to-day operations. But Ivanka, Eric, and Donald Jr. have three formidable branding challenges ahead of them:

The Trump brand has been damaged in many parts of the world, from the Middle East (due to the president-elect’s proposed ban on Muslims entering the U.S.) to Latin America (due to his calling Mexican immigrants rapists and criminals). Many of America’s traditional allies in Western Europe see Trump as a malignant New World version of their own nationalist impulses (indeed, right-wing British politician and Brexit proponent Nigel Farage has already made a pilgrimage to Trump Tower to meet the president-elect). These are not consumers who will be lining up to purchase Trump-branded condos or sleep on Trump-branded bedding anytime soon.

The Trump children will need to launch a charm offensive to separate the brand from the man. Expect to see Ivanka, in particular, take over as the face of the Trump Organization. As a successful businesswoman and mother, she provides a modern brand antidote to her father’s traditionalist reputation.

Deciding whether to reposition the brand

The Trump family has made its fortune serving luxury consumers—the well-heeled, college-educated voters who flocked to Hillary Clinton and rejected Trump. Trump’s children have a critical choice to make: Do they attempt to win back the high-end consumers they’ve traditionally reached (if that’s even possible, with their lightning rod father in office for the next four years)? Or do they shift downmarket and attempt to reach the white, working-class consumers who were Trump’s biggest fans during the campaign? That may mean a divestiture of the luxury condos and golf courses, and doubling down on more affordable “aspirational luxury” products, such as home goods, that his less wealthy fans might embrace.

Expect the Trumps to cling to the luxury market as long as they can; the profit margin is excellent and that’s where their experience lies. But if affluent customers reject their brand rehabilitation efforts over time, they may be forced to alter their business model.

Given the family’s complicated business interests, Trump risks being tarnished by association if his children pursue deals in autocratic countries or places where the U.S. has challenging relationships. If the leaders of a country embrace his family’s developments, and he later supports policies favorable to them, it may be perceived as a quid pro quo. Similarly, if a project abroad runs into difficulties or is opposed by that country’s leadership, any policy stances Trump takes against that nation may carry the tinge of retaliation. The Trump children may need to limit certain business deals—thereby harming their economic interests —in order to avoid bad optics and protect their father’s political interests.

Part of what crippled Clinton’s electoral chances was the perception—advanced and exploited by Trump—that she and her family engaged in self-dealing through the Clinton Foundation, which accepted hefty donations from foreign interests while she was secretary of state. Regardless of the political decisions that Trump makes, it’s likely that he will face similar scrutiny and criticism. It’s now up to his children to ensure that while he’s running a polarized country, the Trump brand can retain—or regain—its lucrative, aspirational appeal.

Dorie Clark is a marketing strategist and professional speaker who teaches at Duke University’s Fuqua School of Business. She is the author of Reinventing You and Stand Out.