How a Black Woman Ventured into the Heart of Trumplandia 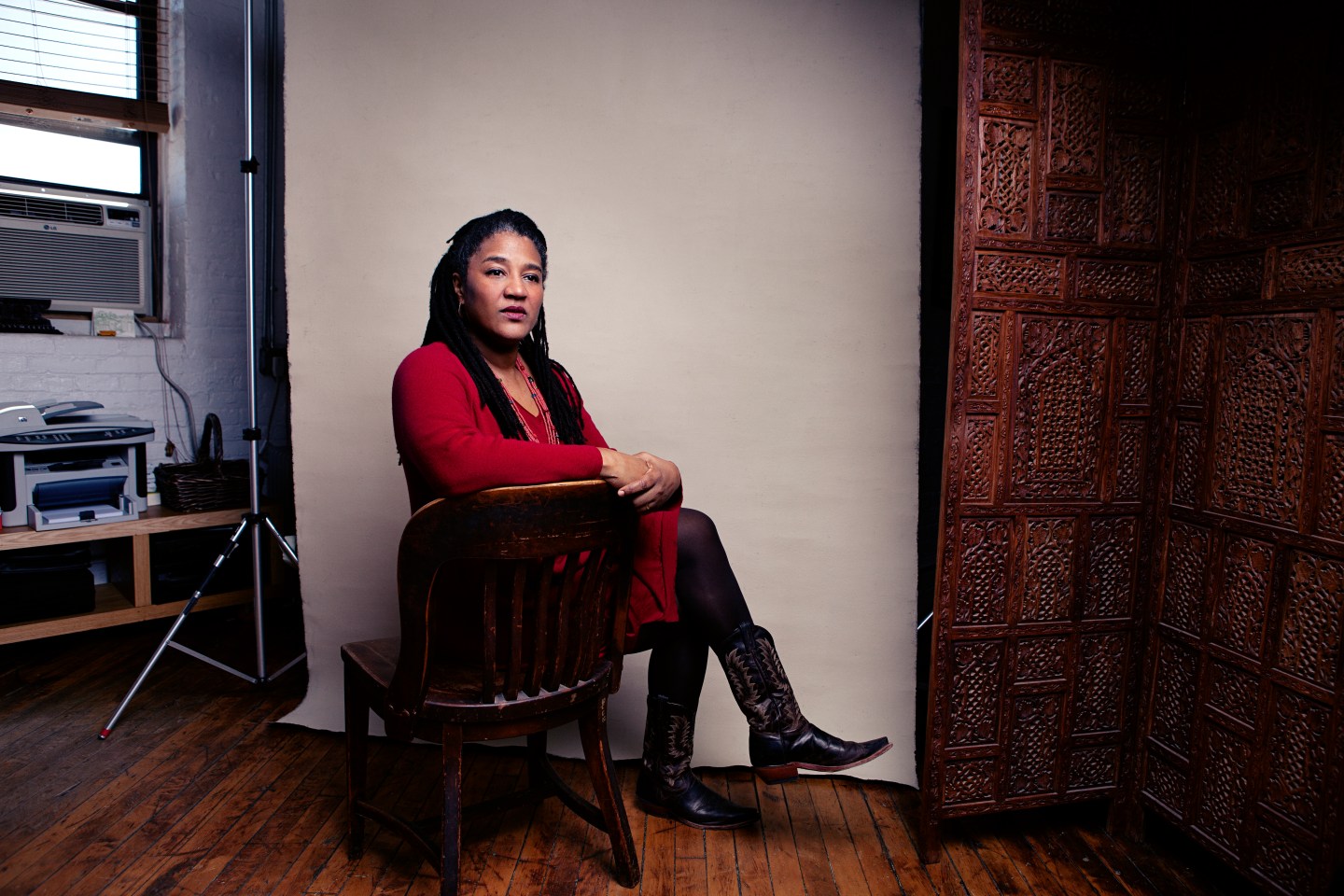 Turn on any news channel, and you’ll hear debate about why so many pollsters and pundits failed to foresee Donald Trump’s victory. No doubt, scholars will be studying Donald Trump’s rise for decades. But some are finding answers in a surprising place—Sweat, a play that recently opened in New York, which focuses on unemployed steel workers, post-Nafta. “Who are these Trump voters?” one critic wrote. “For a thoughtful portrait, turn to playwright Lynn Nottage.”

What is less well-known is that Sweat writer Lynn Nottage based her play on nearly three years of interviews. A Pulitzer Prize winner, who also won a MacArthur “genius” award, she began interviews in 2011 with residents of Reading, Pennsylvania, finishing it in 2014. The home of the Reading Railroad, the town had once been the nexus for industry, with steel and textile manufacturing plants. But when the railroad shut down in the late 1970s, the city began a steady decline, hemorrhaging jobs. By 2011, it had the highest per capita poverty rate of any U.S. city, with a 41% unemployment rate.

What Nottage uncovered during her visits stunned and unnerved her, and convinced her there was a story about white suffering in America that hadn’t been told. “White, middle and working class folks [I met] were feeling incredibly disaffected—really, really angry. They felt the rug had pulled out from under them, and they no longer had access to the American dream,” said Nottage. “And they felt totally unheard.”

In addition to Sweat, which is playing at New York’s Public Theater until December 18, Nottage is creating a multimedia installation, featuring interviews, which will be unveiled in Reading’s defunct rail station in the spring.

In an interview, just days before the election, Nottage sat down with Fortune and talked about what she called America’s “de-industrial revolution.” An edited and condensed version of the transcript follows.

Q: What made you decide to visit Reading in the first place in 2011?

A friend of mine one night wrote me and six of her closest friends an email saying she was completely broke. I knew that she was struggling, but I didn’t know the extent to which she was struggling. I thought, “Here I am just two steps away from someone who is really impoverished, and I’m not really aware of it.” On a day-to-day basis, how close are we to people who are in dire straits? It was just when Occupy Wall Street was beginning. So I called her up, and I said, “It seems a lot of people raising up their voices. Why don’t we go?”

We marched around the park for half a day and I came back a few times. And I began to feel there is bigger story. I felt like I needed to understand what it was. I could read all the books, but I’m someone who likes to be in the sandbox. And Reading is two-and-a-half hours away from New York.

So what did you see in the town?

The first day we went to Reading, they had laid off half of the police force. Half. [My assistant and I] stopped into a gas station and a car pulled up next to us. And he said, “You guys don’t look like you’re from around here. Can I give you a piece of advice?” We said yes. He said, “Get out before sundown.”

We said, “Really?” It was like something out of the Old West!

One day, we went to meet with the mayor, and his car had actually just been stolen. [From the dash cam] you could see criminals pushing his car away.

You said you had an epiphany in interviewing some of these former steel workers—that as a woman of color, you could empathize with middle-aged white men. Can you explain?

The steel factory in Reading had been family-owned and for generations, the workers saw themselves as part of the family. [When they lost their jobs] they felt a sense of betrayal. When I sat in rooms with middle-aged white men, I heard them speaking like young black men in America. They had been solidly middle class for the majority of their working careers, but now they were feeling angry, disaffected, and in some cases, they actually had tears in their eyes.

What surprised me was my ability to empathize with people who I always thought were on the other side of the divide. These are all the things we feel [as people of color]—you should have the opportunity, but the opportunity is just beyond your grasp.

This is what I thought these American steel workers were saying. “We signed this American contract. We did everything we were supposed to do. And yet, the rug has been pulled out from under us. We no longer have access to the American dream.”

That’s where the anger came from.

There’s been a lot written about Trump’s support among white supremacists. Did you see any of that?

There was one guy named Steve. He’d always been a factory worker; then he’d been in prison for committing a heinous act. He’d beaten up, I believe, a Latino man. He was having trouble resurrecting his life after he came out of prison. We’d spent so much time with him, and then when summer came, we discovered he had white supremacist tattoos on his legs. That came as a shock. He’d given us no indication of this inclination. He told us, “That’s not who I am,” and I believed him—when he was in prison, he became the person he needed to be.

But, one thing you feel in Reading is that there are these middle class and working class white folks who feel very angry and are pointing to the Latino population for all their woes. Of course that isn’t the case, but it’s very simple to direct all of your ire in that direction.

It’s a fractured city, divided among economic and racial lines.

So do you think the elites—business leaders, politicians, the media—failed to understand this white middle class rage?

I do. I didn’t understand the extent to which people were suffering until I went and saw. And I think that for a lot of people, it remains abstract and distant, and in that abstraction they’re able to ignore. People feel totally unheard. That’s something that is being borne out right now.

One of the biggest miscalculations among Democrats has to do with the level of suffering among disaffected working class and middle white folks. Why isn’t Hillary [Clinton] leading with those issues? Saying, “I’m going to create jobs” is great, but before you create jobs, something has to be offered to alleviate some of the suffering now.

Which is why Donald Trump’s comments about the system being rigged resonated?

Yes, Donald Trump is saying what people need to hear to alleviate their momentary pain—which is that the system sucks.

I’ve thought a lot about this, and I think he is using the language of revolution. That’s why Bernie was so popular, too. At this moment, people don’t want the same incremental steps—they want the system to be overturned.

I feel like, in a way, we’ve been on this same loop since the 1980s, with de-industrialization. We’re just trying to keep one step ahead—rather than looking for what is the big fix. What’s different now, though, is the level of rage.

Several days after this interview, and three days after Donald Trump’s election to the presidency, I called Nottage to hear her thoughts about the results. She said Trump’s victory “shocked” her mainly because of the media predictions that Hillary Clinton would win. But based on the interviews she had in the Rust Belt, she didn’t find the election outcome surprising. She added:

Trump was very successful at stoking the fires and creating division. I hope he now has the good sense to try to bridge the gap. A lot of people—Muslims, Mexicans, men and women of color—are feeling discomfort and uncertainty now, which shouldn’t be the case in a democratic process. I feel as though there is going to be hyperawareness on people’s part. We’ve been asleep. Now, we’ll see more politically-engaged people, and a larger swath of the population who will speak out through their art. That’s a good thing.