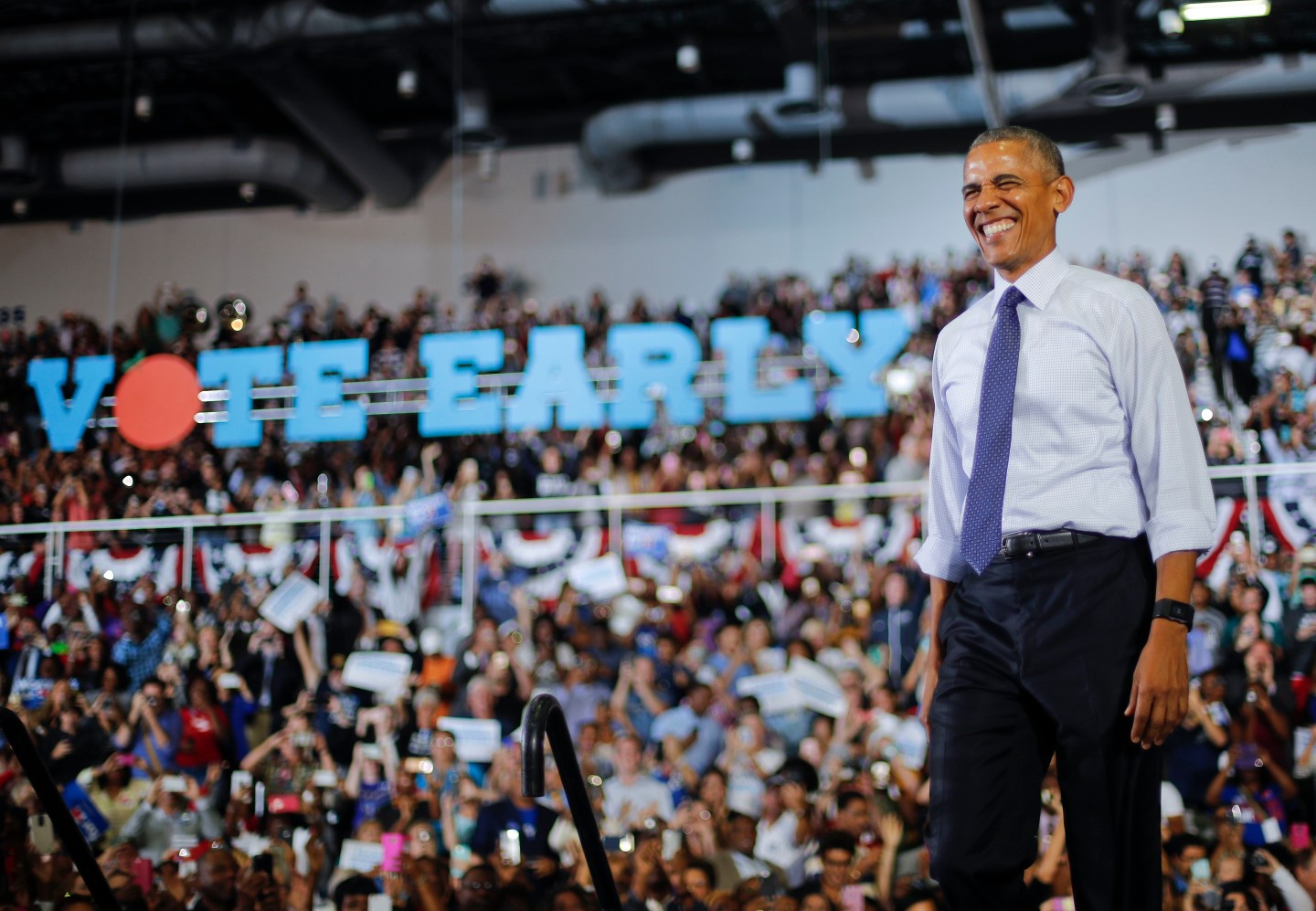 While Hillary Clinton accuses Donald Trump of appealing to hatred, the Republican nominee predicts that never-ending investigations will prevent his Democratic opponent from governing effectively.

With polls showing Trump closing in on Clinton in key battleground states, her campaign is rushing to shore up support in Michigan and other long-standing Democratic strongholds. Her shrunken lead gives Trump’s campaign a glimmer of hope, one he’s trying to broaden into a breakthrough before time runs out.

That means zeroing in on questions of Clinton’s trustworthiness and a new FBI review of an aide’s emails. The attack is aimed at appealing to moderate Republicans and independents who have been the holdouts of his campaign, turned off by his behavior but equally repelled by the possible return to Washington of Clinton and her husband, former President Bill Clinton.

“Here we go again with the Clintons—you remember the impeachment and the problems,” Trump said Thursday at a rally in Jacksonville. “That’s not what we need in our country, folks. We need someone who is ready to go to work.”

Clinton told her supporters that Trump was unique for a major-party candidate in presidential politics, a nominee whose temperament and disparaging comments about women and minorities make him unfit for office.

“He has spent this entire campaign offering a dog whistle to his most hateful supporters,” Clinton said, singling out Trump’s endorsement from the official newspaper of the Ku Klux Klan and noting he has retweeted messages from white supremacists.

“If Donald Trump were to win this election we would have a commander in chief who is completely out of his depth and whose ideas are incredibly dangerous,” she told supporters during a rally at Pitt Community College in Greenville, North Carolina.

President Barack Obama attacked Trump while campaigning for Clinton in Florida, another state where polls showed a tight contest. Speaking to students at Florida International University in Miami, Obama told voters that this is the time to get serious about the choice.

“This isn’t a joke. This isn’t ‘Survivor.’ This isn’t ‘The Bachelorette,'” he said, taunting the former reality-TV star. “This counts.”

Obama has been trying to bait Trump into veering off message—counting on the Republican not to have the discipline or the ground game to capitalize on a late surge. But the famously unconventional businessman has been hewing closer to convention, running some upbeat ads, bringing out his wife for a rare campaign appearance and even talking publicly about trying not to get distracted.

“We don’t want to blow it on Nov. 8,” Trump said during the Jacksonville event, his fourth in Florida in two days.

Trump was in North Carolina, too, delivering a defense-related speech at a nighttime rally in which he said he couldn’t picture Clinton as commander in chief. He saluted veterans as “so much more brave than me. I’m brave in other ways. I’m financially brave, big deal!”

In spite of a close race in national polling, Trump’s path to victory remained narrow. He must win Florida to win the White House, no easy feat. Still, his campaign has been buoyed by signs that African-American turnout for Clinton may be lagging.

Clinton’s schedule underscored the Democrats’ fresh anxiety. She was due to campaign Friday in Detroit, where a large turnout of black voters has long been crucial to success. She was also appearing in Pittsburgh and Cleveland while running mate Tim Kaine traveled to Florida.