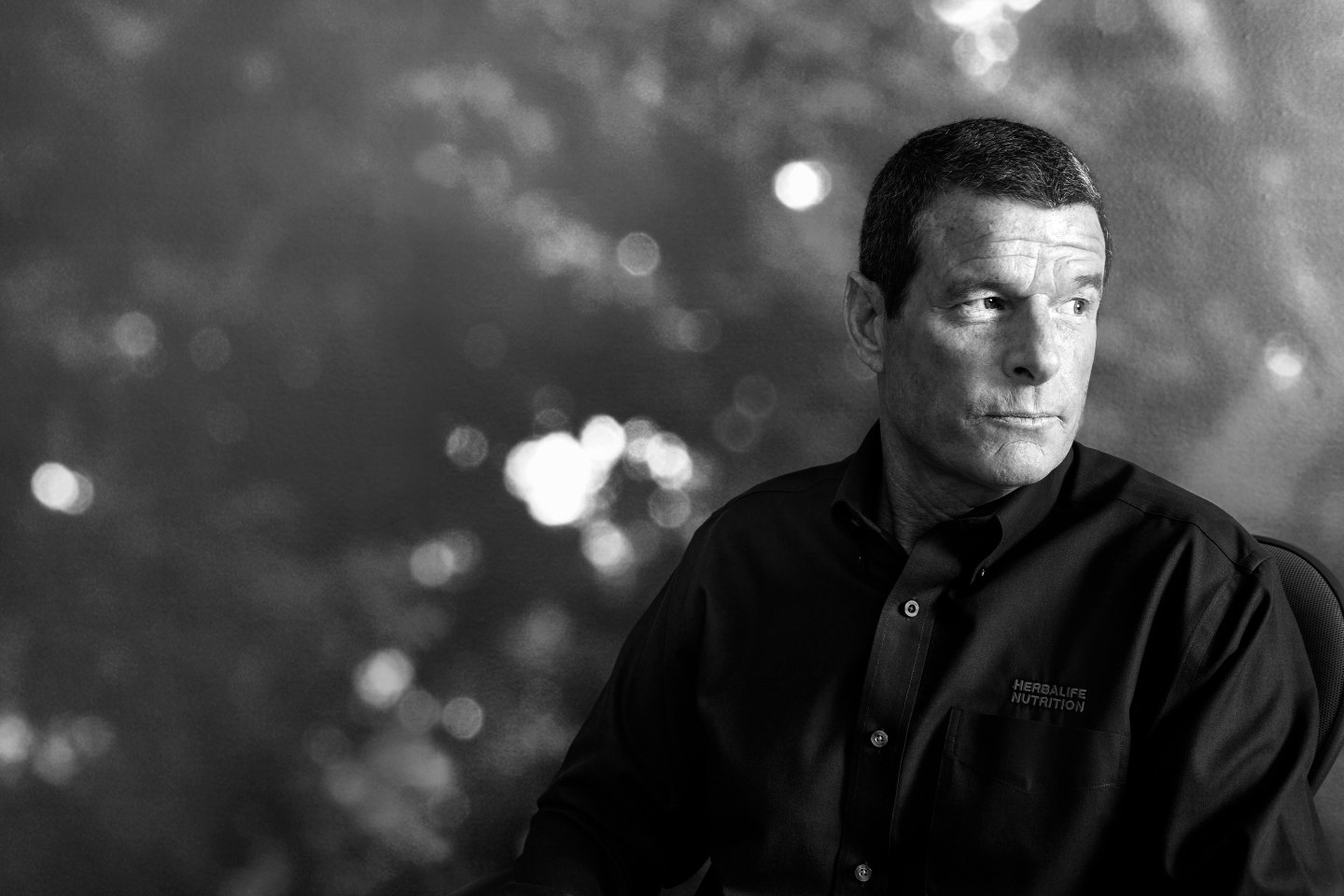 Since its founding in 1980, controversial health shake and dietary supplements company Herbalife has really had only two CEOs worthy of the name. So the loss of the second one, Michael O. Johnson, whose plan to step down next June was announced Tuesday evening, is a body blow for the company’s employees, distributors, and investors alike. (He will stay on as executive chairman.)

To be sure, Johnson’s sucessor, COO Rich Goudis, is well qualified, highly regarded by his colleagues, and the obvious choice for the position. He has been with the company 12 years—he was one of Johnson’s first major hires after Johnson arrived in 2003—and is in many respects more polished, temperamentally even-keeled, conversant with numbers and details, and, well, just generally more corporate than his predecessor.

But Herbalife (HLF) is a unique company. The charismatic, driven, relentless, fanatically athletic, and mercurial Johnson, 62, had shaped it in his own image. Participating in grueling bike races across the Alps or Rockies in his green-and-black Herbalife-logo cycling duds, he became the living emblem of a brand he largely created. (Due to its incorporation in the Cayman Islands, Herbalife is not eligible for the Fortune 1000 list. It’s $4.47 billion in sales in 2015 would have placed it 549th on our 2016 list, a couple notches below Chipotle Mexican Grill. It has more than 8,000 employees.)

One could argue that now was a logical time for Johnson to step down as CEO, since he had just finished shepherding the company through the worst of its challenges—an FTC investigation into whether the company was a pyramid scheme, which led to a $200 million settlement in July.

But the settlement is not truly a done deal. It calls for structural changes that have not yet been implemented—that won’t start happening till next May—and the impact of those changes on the company is still quite uncertain.

Herbalife is a multi-level marketing company, or MLM. That means that it uses independent contractors, called distributors, to sell its products, and those distributors are incentivized not just to find retail customers, but also to sign up additional distributors. A successful distributor will receive compensation that reflects not only his own sales, but also those of his “downline”—that is, his recruits, and the recruits of his recruits, and so on, based on complex formulas.

Though MLMs are lawful—others include Avon (AVP), Usana (USNA), Nu Skin (NUS), Melaleuca, and Berkshire Hathaway’s Pampered Chef (BRK.A)—they at least superficially resemble pyramid schemes. The more focused they are on rewarding recruitment, rather than sales of products to customers, the more likely it is that they are pyramid schemes. The structural changes the FTC is requiring are aimed at ensuring that its compensation scheme cannot reward recruitment divorced from sales.

Herbalife’s founder and first CEO, Mark Hughes, built a company that cast itself as a weight-loss products company. Hughes was a ninth-grade dropout, a gifted salesman, a bit of a scoundrel, a poor manager, and a beloved charismatic leader whom many powerful Herbalife distributors still remember and cherish. In 2000 he was found dead in his bed, age 44, from a toxic combination of alcohol and Doxipin, an antidepressant.

Hughes left a company in disarray. It was purchased on the cheap by two private equity firms in 2002. A series of short-lived interim CEOs served as caretakers for the company until the PE guys managed to entice Johnson, then a 17-year veteran at Disney and head of its international division, to take over as the new CEO in April 2003.

Johnson—a fitness nut partial to health shakes—was attracted by the notion of heading a nutrition company and by the potentially lucrative equity incentives dangled before him. (As of September 2015, when a feature story I wrote on Herbalife came out, Johnson had indeed cashed in: He earned $163.5 million from his periodic sales of stock and options.)

Shortly after he first got to the company, though, Johnson learned about some of the lawsuits that had been filed against Herbalife—and even a criminal enforcement action in Canada—alleging that some of its most powerful distributors were using seamy, misleading, and predatory business practices to rope prospective distributors into spending exorbitant sums to learn a business few of them would ever profit from.

He actually considered quitting, he told me last year, but was talked into trying to turn the company around instead by his mentor, Jerry Perenchio, who was then chairman of Univision.

So Johnson set about trying to transform the Herbalife—improving its products, brand, image, and ethics. He unquestionably succeeded with respect to the first three goals.

“When I took over in 2003, Herbalife was a multilevel-marketing company that sold nutrition products,” Johnson said during our conversations last year. “Now it’s a nutrition company that uses multilevel marketing as its distribution channel.”

He brought product manufacturing in-house, set up quality controls, and expanded product offerings. To promote its new focus on nutrition and fitness (rather than just weight-loss), he expanded its sponsorship of sports teams and celebrated athletes. (It now sponsors more than 200 of them, including Portuguese soccer god, Cristiano Ronaldo).

He also took steps to phase out scummy business practices and tone down outlandish claims being made about the “business opportunity”—i.e., he scaled back pitches to distributors about how much money they might make.

Nevertheless, after a 28-month investigation concluded this past July, the Federal Trade Commission concluded that what Johnson had accomplished was not nearly enough. While not opining on whether the company was a pyramid scheme, the commission did accuse Herbalife of still using illegally deceptive business pitches—misleading prospective distributors into believing they could quit their jobs and become wealthy—when in fact the chances of doing so were vanishingly slim. (Herbalife’s own disclosures show that in 2014, for instance, even the minority of distributors who succeeded in creating “downlines” still only received average gross compensation from the company of $300 per year.)

Under the terms of the settlement, Herbalife neither admitted nor denied the FTC’s allegations.

Whatever one thinks of the morality of Herbalife’s business model—before or after the settlement—Johnson’s charisma and rapport with a wide range of people was vital to performing some of the unusual tasks that an Herbalife CEO is called upon to perform.

The company, for instance, holds more than a dozen “extravaganzas” across the world each year—large, emotional gatherings of distributors held in cavernous venues like sports arenas and convention centers. Here top company officials and distributors rev up enthusiasm, shore up morale, and exhort distributors to achieve greater levels of performance. (Critics say that these rallies are designed to whip distributors into an frenzy in which they suspend judgment and fall prey to the irrational belief that they will become wealthy, despite the overwhelming odds that they will either earn a pittance, or lose money.)

I attended an extravaganza in St. Louis in July 2015. There, Johnson and other top officials and distributors strode on stage to throbbing rock music, where they were strafed by multiple roving spotlights. Before speaking, they knelt down and signed autographs for star-struck distributors who thronged the lip of the stage.

In St. Louis Johnson delivered, without notes, an emotional speech that lasted more than 90 minutes. Afterward he met with several high-producing young distributors, one at a time, in a private room. They were enthusiastic entrepreneurs from diverse socioeconomic backgrounds and far-flung geographic regions. Some were college educated and some were not, and they ranged from their early 20s to their mid-30s. Johnson would ask: How can we help you? What do you need from us? What products are selling? What aren’t? What’s working? What isn’t?

He spoke to them as equals and as business partners, and—incredibly, given their different stations in life—they felt comfortable responding in the same way. His rapport with them was visceral and genuine, and his enthusiasm was infectious.

I’ve met Rich Goudis, and liked him. I have no trouble believing those who assure me that he was a top-notch CFO and, later, COO at Herbalife. But I’m having trouble picturing him mixing it up with the rank and file the way Johnson could.

Herbalife has a lot of challenges in the years ahead. First, it has to cope with the significant new structural changes it agreed to implement in the FTC settlement. Second, it will have to entice new prospective distributors with business pitches that don’t overstate their slim chances for substantial success. Third, it will have to do both of the first two things under the watchful eye of an independent auditor—also agreed to in the deal—who can take disputes to a federal judge if he thinks the company isn’t living up to its promises.

And now Herbalife executives, employees, and distributors will have to surmount all these challenges without the leader whose charisma and vision inspired so many of them to join company in the first place.