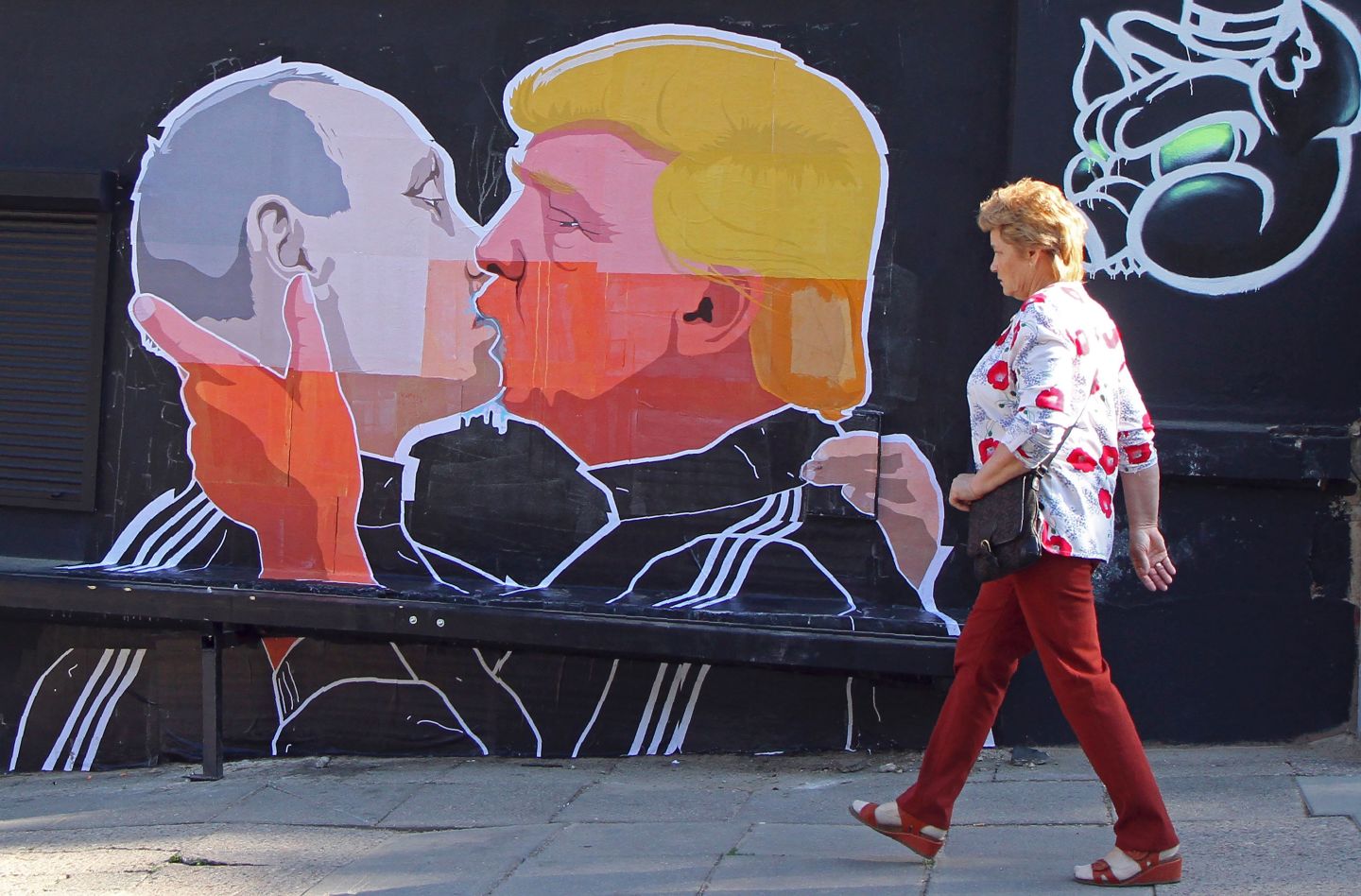 A woman walks past a mural on a restaurant wall depicting US Presidential hopeful Donald Trump and Russian President Vladimir Putin greeting each other with a kiss in the Lithuanian capital Vilnius on May 13, 2016. Kestutis Girnius, associate professor of the Institute of International Relations and Political Science in Vilnius university, told AFP -This graffiti expresses the fear of some Lithuanians that Donald Trump is likely to kowtow to Vladimir Putin and be indifferent to Lithuanias security concerns. Trump has notoriously stated that Putin is a strong leader, and that NATO is obsolete and expensive. / AFP / Petras Malukas (Photo credit should read PETRAS MALUKAS/AFP/Getty Images)
Petras Malukas — AFP/Getty Images

The questions have been a recurring undercurrent throughout the presidential campaign: What is Donald Trump’s relationship with Russia? Why does he keep praising its president, Vladimir Putin? Is Russia meddling in the U.S. election? And is the FBI investigating any of this?

As the race enters its final stretch, a look at the situation:

Trump has raised eyebrows for repeatedly praising Putin’s leadership and advocating a closer working relationship with Russia despite its record of human rights abuses and recent military incursions in Ukraine and Syria.

“At least he’s a leader,” Trump told MSNBC of Putin last December, “unlike what we have in this country.”

Trump often bemoans the state of U.S.-Russia relations and argues the U.S. would be better off if the two countries put aside their differences and worked together to take on Islamic State militants. That’s despite Russia’s backing of Syrian President Bashar Assad, whom the U.S. opposes.

In recent days Trump has also escalated his criticism of rival Hillary Clinton for being too tough on Putin.

“She speaks very badly of Putin, and I don’t think that’s smart,” Trump recently said at a rally in Ohio. “How do you speak so badly of someone?”

Trump has been contradictory when describing his relationship with Putin. He told ABC in July that he had “no relationship with” with the Russian leader and had no recollection of ever meeting him. But several times in prior years, he’d stated the opposite.

“I do have a relationship with him,” Trump said in one 2013 interview in Moscow.

Throughout the campaign, Trump has repeatedly tapped top advisers with close ties to Russia. Among them: former campaign chair Paul Manafort.

Trump brought on Manafort in March. Manafort, a longtime Republican operative who’d spent recent years advising a pro-Russian Ukrainian political party before its ouster over alleged corruption, and his deputy Rick Gates took over functional control of managing the Trump campaign in June.

Given the Republican Party’s generally hawkish stance on Russia, Manafort’s past work repeatedly put him in the spotlight.

In August, The New York Times reported that a hand-written ledger of cash payments made by Ukraine’s ousted government listed Manafort as being paid $12.7 million. Ukrainian prosecutors said the payments detailed in the ledger were an effort to obscure bribes.

A few days later, The Associated Press reported that Manafort and Gates had orchestrated a secret Ukrainian lobbying campaign in Washington. Participants said the men had sought to obscure the true backer of the work — Ukraine’s pro-Russian ruling party — by routing lobbying funds through a nonprofit front group.

Manafort and Gates denied having been involved in the lobbying. But emails obtained by the AP explicitly showed Gates giving orders to the lobbyists.

Democratic Party officials learned in late April that their systems were attacked after discovering malicious software on their computers. A cybersecurity firm, CrowdStrike, found traces of at least two sophisticated hacking groups on the Democrats’ network — both with ties to the Russian government.

Those hackers took at least one year’s worth of detailed chats, emails and research about Trump, according to a person knowledgeable of the breach who wasn’t authorized to speak publicly.

CrowdStrike said one of the hacking groups, dubbed Cozy Bear, had previously infiltrated unclassified networks at the White House, the State Department and the Pentagon’s Joint Chiefs of Staff. Another group detected, called Fancy Bear, had targeted private- and public-sector networks since the mid-2000s.

In addition to the Democratic Party hack, other emails were made public in recent months that detailed tens of thousands of messages from Democratic operatives.

Among those were emails of Clinton’s campaign chair John Podesta, which contained thousands of messages to and from Clinton campaign insiders. Clinton’s campaign has said it was notified by the U.S. government that it was investigating Russia for the Podesta hack.

The Podesta emails have been publicly released daily by WikiLeaks. They have provided a steady stream of questions about Clinton’s policy positions, personnel choices and ties with her husband’s charitable network.

The Office of the Director of National Intelligence and the Homeland Security Department have formally accused Russian state-sponsored hackers of the Democratic Party cyberattacks and accused them of trying to influence the presidential election.

Trump, meanwhile, has said there’s no proof of Russian involvement in any of the hacking. He’s taken a blase attitude toward a foreign power’s attempts to influence the election, at one pointing calling on Russia to find emails Clinton had deleted. His campaign later said he was joking.

As the election enters its final stretch, Democrats have been pressing for action.

But the FBI’s actions are unclear.

Sen. Harry Reid, the Nevada Democrat, accused FBI Director James Comey of a double standard by publicly discussing the FBI’s investigation into Clinton’s private email server without confirming whether it had opened a probe into the Trump campaign’s ties to Russia.

The New York Times reported that the FBI this summer had looked into links between the Russian government and the Trump campaign, but had so far found nothing conclusive or criminal. An FBI spokeswoman declined to comment on the report.

WHAT HAS RUSSIA SAID?

Russia, including Putin, has denied meddling in the U.S. election.

The AP learned that Russia’s government did lodge an angry complaint in September with the United Nations over a top U.N. official’s condemnations of Trump and several European leaders, an unusual intervention given that none of the criticized politicians were Russian.