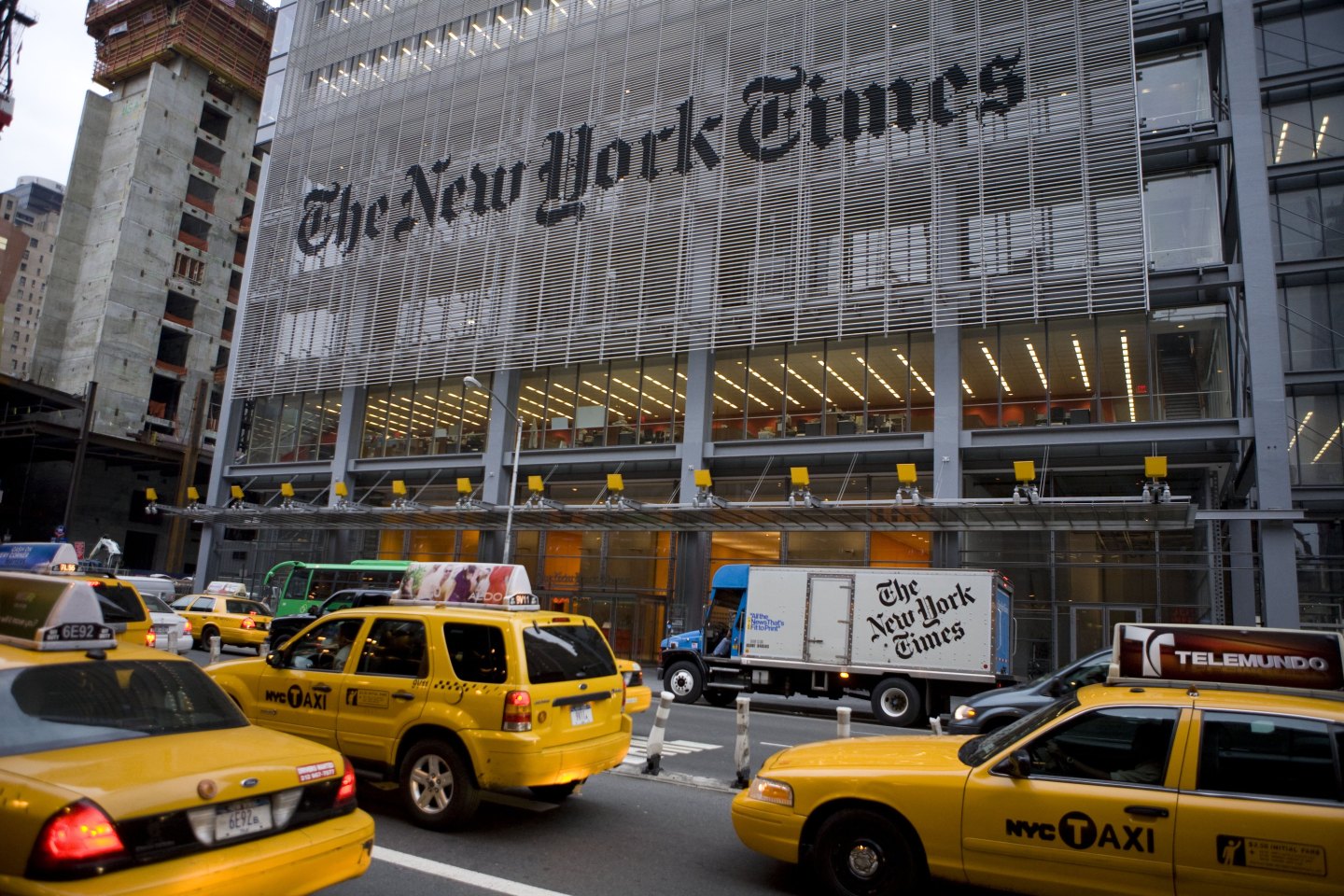 The fact that print-based advertising revenue is declining is no surprise to anyone following the media industry. But what is hitting publishers like the New York Times particularly hard is that this drop isn’t at a steady pace—instead, it’s actually been picking up speed.

In the first quarter, for example, the newspaper’s revenue from print advertising fell 9%. In the second quarter, it dropped 14%. And in the latest quarter, it fell almost 19%.

Media analyst Clay Shirky predicted in a discussion with New York Times public editor Margaret Sullivan last year that after a period of gradual decline in print revenue, newspapers would likely start to see a much more rapid drop, as advertisers pulled out of print en masse.

On the plus side, the Times‘ digital-advertising revenue climbed 21% in the latest quarter. But despite that growth, it still remains a much smaller number: The Times made $44 million on various forms of digital advertising, including native or sponsored content, but almost twice that much from print advertising.

The company said that growth in digital came from its in-house native advertising business, and also from video (among other things, the paper is being paid an estimated $3 million by Facebook to produce regular video clips for the social network’s Facebook Live feature).

At the same time, however, producing that kind of advertising and content is much more expensive than the traditional print kind, and that helped push the paper’s costs up during the quarter, even as revenue fell.

The Times has made great strides in diversifying away from advertising with its digital subscription business, which also grew in the quarter. The paper added 116,000 subscribers, the best performance since the pay model launched in 2011, according to CEO Mark Thompson. “We think of ourselves as primarily a subscription business,” he said on the Times’ conference call.

However, print is still overwhelmingly important on that side of the ledger as well: Digital subscribers only contributed $58 million in revenue for the quarter, while print subscribers generated $160 million.

In other words, the digital side of the Times‘ business is growing, in some cases rapidly, but it still isn’t contributing enough to make up for the ongoing decline in print-based revenue. And if the fall in print advertising is accelerating, that is going to make the math even harder.

The Times said that it expects the decline in print advertising revenue to continue in the future “at a rate similar to that seen in the third quarter.” In other words, almost 20% per quarter.

The company said that its digital businesses were larger than its “legacy” or print businesses in the quarter that just ended. But that happened primarily because those legacy businesses are shrinking so rapidly, not because digital is growing quickly enough to outpace them.

Peretti: We Want to Make Media for the Way the World Is Today

The Wall Street Journal is going through something similar. It said Wednesday that it is consolidating a number of sections of the paper, and it has offered company-wide buyouts to try to reduce costs.

According to at least one estimate from a former senior executive at News Corp. (which owns the Journal), the newspaper is likely to come in as much as 30% below its revenue targets for the most recent quarter. The cuts it is making now are likely to only be the beginning.

From a financial point of view, meanwhile, cutting costs can actually makes things look worse in the short term, as the Times‘ latest results demonstrate. One of the main reasons the company’s operating profit fell by 59% in the quarter was a $13-million charge it took for severance costs related to the latest round of newsroom buyouts.

Those and other costs pushed the Times into the red for the year, giving it a net loss of $14 million for the first nine months, compared to a profit of $11 million for the same period in 2015.