LinkedIn’s New Tool Lets You Compare Your Salary to Others 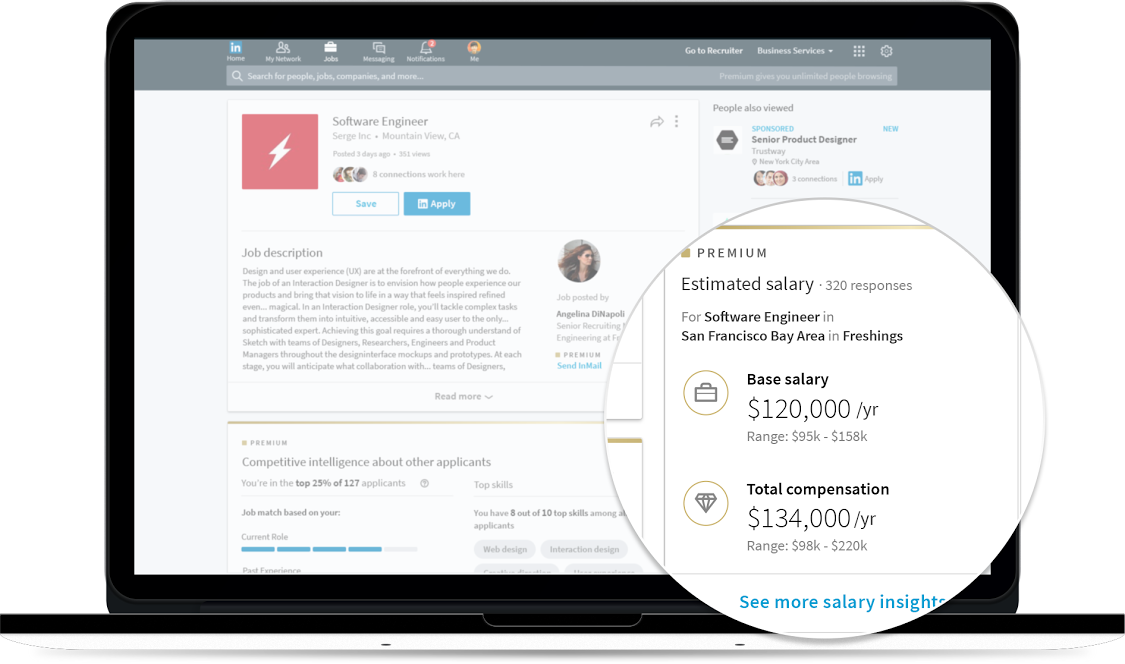 LinkedIn wants to help its users compare their salaries to their professional peers.

On Wednesday, the social network for the professional opened up access to its new salary tool to its users in the U.S., U.K., and Canada. Now, professionals can look up aggregate data about the salaries of other users with the same job and in the same location to see how their own pay measures up.

“One of the things in our research that has become quite obvious is that salary is a big part of how people make career decisions,” LinkedIn director of product management Dan Shapero told Fortune.

When users input their profession and location, LinkedIn’s tool shows them a breakdown of others’ compensation. Users can then filter by years of experience, education level, and other criteria. According to Shapero, these filters can help LinkedIn’s users get a better sense of how they measure up. For example, they might discover that peers with more experience or a relevant graduate degree are consistently paid more. In turn, this might give them guidance as to how to achieve the compensation level they want.

However, it would have been difficult to collect this data as gender is not included in the profile LinkedIn users fill out.

“I think our goal is to facilitate conversations and help people make good decision,” said Shapero when asked about the lack of data by gender. Moreover, because LinkedIn aggregates salaries of both genders, it could help women get a sense of whether they’re being underpaid if the median pay is significantly higher than theirs, he explains.

To get a start on its new salary database, LinkedIn (LNKD) reached out to 1 million of its users across various locations and jobs and asked them to submit data about their compensation. Now that the tool is available to all LinkedIn users, they’ll be able to freely access results for one salary search, but will have to contribute their own salary to the database if they want to continue exploring the tool. LinkedIn Premium users can access the data without sharing their own. And while the data only covers jobs in the U.S., U.K., and Canada for now, users in other countries will be able to access it. This can come in handy if an engineer in Germany is considering a job in California, for example, and wants to get a sense of the market.

To ensure it has accurate data, LinkedIn has figured out that roughly 10% of data submitted by its users isn’t entirely reliable, so it discards it from the data is shows users.

For more on LinkedIn, watch this Fortune video:

LinkedIn plans to eventually work closely with universities to tailor its salary tool to the needs of students as they plan their careers. It also plans to add suggested coursework from Lynda.com, an online education company it purchased last year for $1.5 billion, as a way to help users work toward the compensation level they want, when applicable.

“We believe people would invest in themselves more if they knew the certain R.O.I. [return on investment],” said Shapero.

Of course, LinkedIn is far from the only company to provide this type of salary tool. For example, Glassdoor, a popular service for looking up reviews of companies from employees, recently debuted its own.