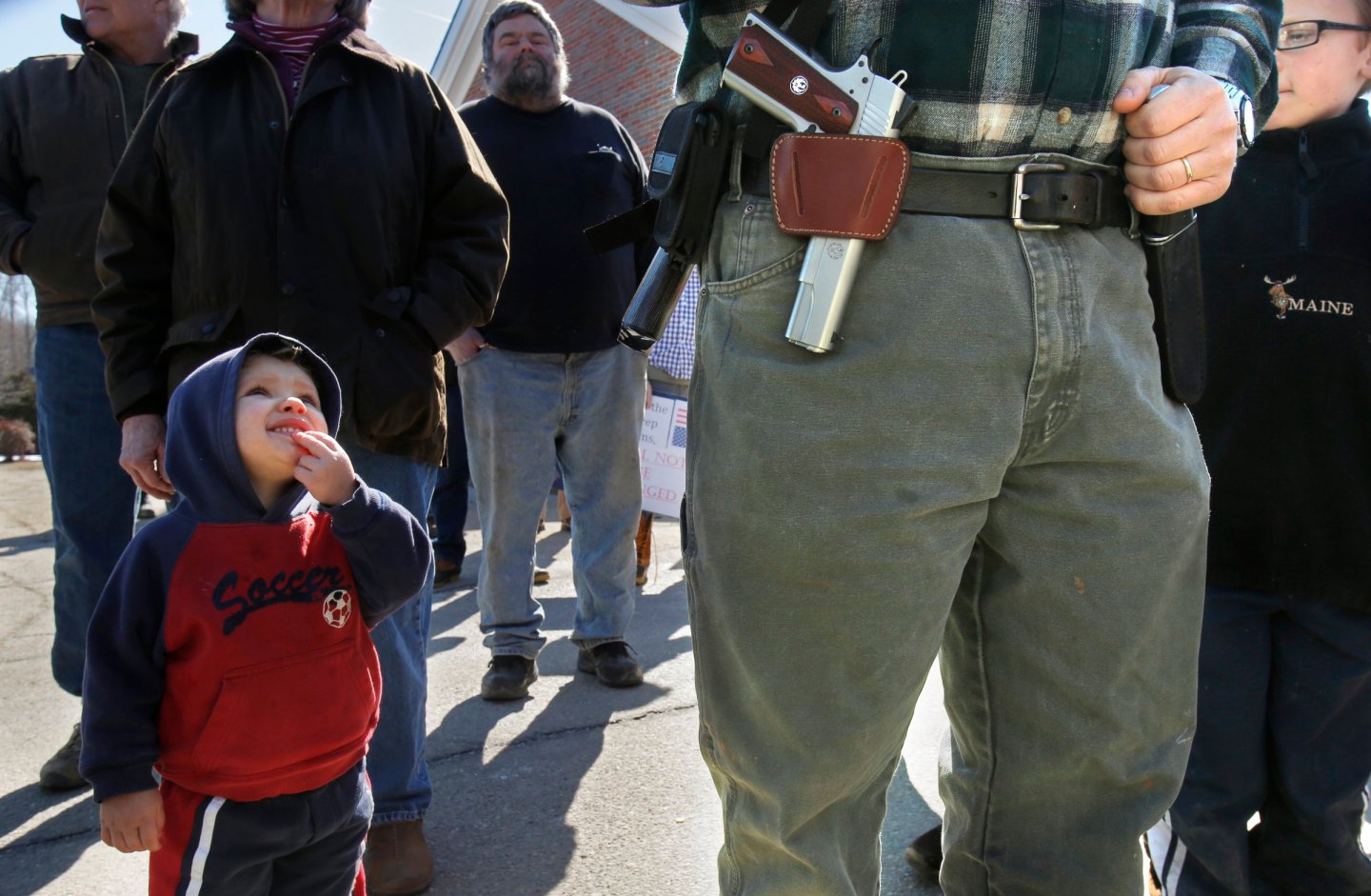 Samson Hiltz, 2, looks up to his father Jeremy Hiltz of Chelsea while the two attend a rally protesting gun control legislation and supporting gun rights in Wiscasset on Saturday, March 9, 2013. Hiltz is a pastor at the Windsor Memorial Baptist Church and the pistol in the holster at his hip is a Ruger SR1911. About 175 people attended the rally, which was organized by Jessica Beckwith of Lewiston, who is forming the Maine Gun Rights Coalition. (Photo by Gregory Rec/Portland Press Herald via Getty Images)
Portland Press Herald Getty Images

The last time voters in Maine were asked about gun rights, they easily passed a constitutional amendment creating a right to own firearms that “shall never be questioned.”

Three decades later, the state known for its hunting tradition will vote on whether to tighten restrictions on gun sales and transfers.

Maine is one of four states, along with California, Nevada and Washington, where voters will decide Nov. 8 whether to enact tougher firearms laws. In a change from past elections, there are no statewide initiatives seeking to expand gun rights anywhere in the U.S.

The presence of so many ballot questions in the same year reflects the strategy, growing power and deep pockets of gun-control supporters, who are outspending opponents in all four states. They hope passage of the proposals shows widening support for more measures designed to keep firearms away from dangerous people.

In Maine and Nevada, a group founded by former New York City Mayor Michael Bloomberg has spent millions advocating for background checks on nearly all gun sales and transfers. Supporters want to close gaps in the federal system that allow ineligible felons, domestic abusers and the mentally ill to buy firearms from private sellers at gun shows and online without a background check.

“I do call it a movement. People are really getting fed up with all the violence,” said Judi Richardson, 57, of South Portland, Maine, who gathered signatures to help place the initiative on the ballot.

Her 25-year-old daughter, Darien, was fatally shot in 2010 during a home invasion that remains unsolved. The investigation hit a dead-end because the handgun used to kill her was bought without a background check from a seller who told police he did not know the buyer’s name. Richardson said the Maine initiative would help reduce gun violence by making firearms harder to access and easier to trace.

In Washington state, advocates who successfully campaigned for a background check law in 2014 are now seeking passage of a measure that would allow judges to issue orders temporarily seizing guns from people who are deemed a threat. For instance, concerned families could seek the removal of guns from relatives threatening to harm themselves or others.

California’s Democratic lieutenant governor, Gavin Newsom, is leading the campaign for a first-of-its-kind law that would require anyone buying ammunition to pass a background check and obtain a state permit.

For more on gun control, watch:

Gun-safety groups say a Democratic sweep that includes a White House victory and party gains in Congress would put pressure on federal lawmakers to strengthen the national background-check system.

Congress has blocked attempts to create universal background checks, even after the fatal shooting of 20 elementary school students in Newtown, Connecticut, in December 2012. That prompted groups such as Bloomberg’s Everytown for Gun Safety to focus on a state-by-state strategy often compared to the strategy used to spread gay marriage.

The history of gun-related ballot initiatives shows how the tide of public opinion may be turning. During the last 40 years, states have approved 15 out of 18 ballot initiatives to expand gun rights and six of nine to restrict them, according to Ballotpedia, which tracks the initiatives.

Supporters organized the initiatives in Maine and Nevada after the states’ Republican governors in 2013 vetoed background check bills approved by their legislatures.

Everytown is the largest spender in those states, assembling coalitions that include concerned parents, families of gun violence victims and law enforcement officials. The movement has also been financed by entrepreneurs such as Nicolas Hanauer of Seattle, who has donated more than $1 million total to the Washington, Maine and Nevada campaigns.

“My guess is they will be successful, and you will see voters in different geographies and backgrounds who are willing to stand up for stronger gun laws,” said Zach Silk, a Hanauer aide who is helping lead the Washington campaign.

If the Maine and Nevada initiatives pass, half of Americans would live in the 20 states that require universal background check laws on gun sales, Everytown President John Feinblatt said.

Opponents say the measures will not stop criminals and go too far by banning the routine sale and transfer of guns between law-abiding citizens, who would have to drive to a firearms dealer and pay for a background check that can cost $30.

“It’s a restriction on the freedom of the good guys,” said 75-year-old Charles Rumsey III of Bangor, Maine, secretary of the Penobscot County Conservation Association, which is opposing the initiative in that state.

The retired Defense Department employee recently borrowed a rifle from a longtime acquaintance after his malfunctioned so he could compete in a shooting event. He worries that such a transfer would be illegal without a background check.

The Maine and Nevada initiatives would require anyone buying or receiving a gun to pass a background check at a federally licensed dealer, with limited exceptions for hunting and transfers of guns between family members. Anyone who has a felony or disqualifying domestic abuse conviction would be denied, as required by federal law.

Rumsey said the possible effects are not well understood and that questions are getting drowned out by the safety message of supporters.

The National Rifle Association is financing opposition efforts in Nevada and Maine but has spent far less than supporters. NRA spokeswoman Jennifer Baker said the states were carefully selected because they were “electorally advantageous” for gun-control supporters.