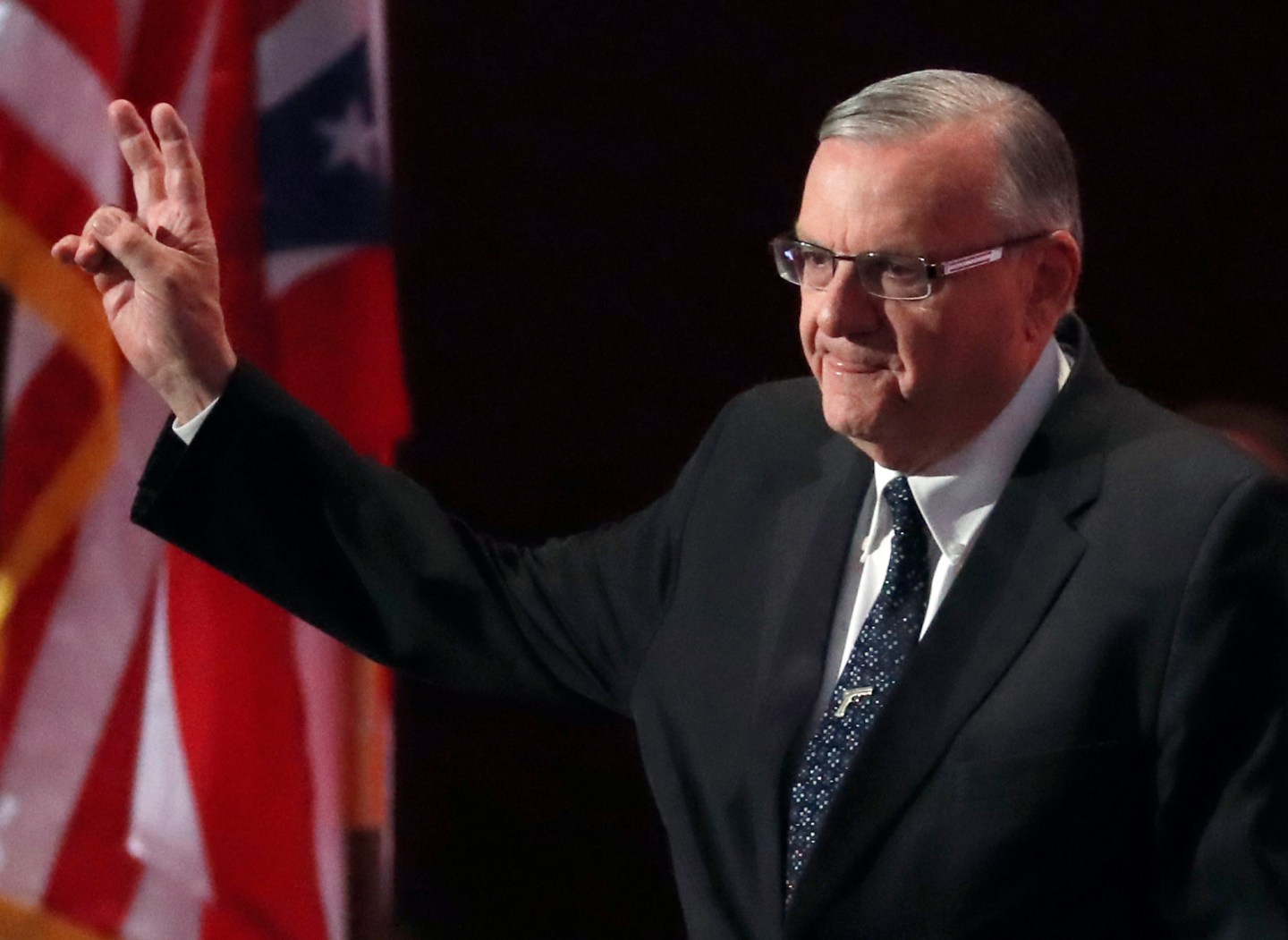 FILE - In this July 21, 2016, file photo, Sheriff Joe Arpaio of Arizona walks on the stage to speak during the final day of the Republican National Convention in Cleveland. Arpaio is now the one targeted in a criminal case. He was charged two weeks before Election Day with contempt of court for defying a judge's order in a racial profiling case. (AP Photo/Paul Sancya, File)
Paul Sancya AP

The tough-talking sheriff of metro Phoenix has won six elections by crafting an image as a law enforcer who targets parents skipping out on child support, animal abusers and immigrants in the country illegally.

Now, Sheriff Joe Arpaio is the one targeted in a criminal case. The 84-year-old lawman, who became a national figure by forcing inmates in his jails to wear pink underwear and live in tents in the desert heat, was charged two weeks before Election Day with contempt of court for defying a judge’s order in a racial profiling case.

The election initially centered on the growing taxpayer costs of the case Arpaio lost three years ago.

The focus shifted after the U.S. Justice Department announced the day before early voting began that it would prosecute Arpaio for continuing his signature immigration patrols, which a judge concluded more than a year later had racially profiled Latinos.

Arpaio could go to jail for up to six months if convicted, but he would not be barred from office if he secures a seventh term. He has acknowledged breaking court orders but insisted the violations were unintentional.

The Republican sheriff‘s political strength has waned over the last few elections in the heavily Hispanic state, but a devoted base of supporters who are enthusiastic about his unorthodox tough-on-crime tactics as well as his impressive fundraising, much of it from outside Arizona, has kept him afloat.

His race against Democrat Paul Penzone, a retired Phoenix police sergeant who lost to Arpaio in 2012, marks the toughest campaign in his two-decade-long career.

The defiant sheriff isn’t backing down. Soon after the federal government agreed to prosecute him this month, Arpaio began running a TV ad claiming he was being targeted because of his immigration crackdowns and accusing the Obama administration of using the contempt case to hurt him politically.

“What a bunch of garbage,” Arpaio said.

He has walked away from criminal investigations in the past without facing charges and still has gotten re-elected. Arpaio faced a federal investigation four years ago on allegations that he retaliated against local officials at odds with him by accusing them of corruption.

Mike O’Neil, a local pollster who has followed the sheriff’s career, believes Arpaio will have difficulty emerging victorious this time given the stream of negative news from the racial profiling case and criminal charges.

“There aren’t too many politicians who could survive that,” O’Neil said.

The media-savvy sheriff who has bragged about his availability to news reporters declined a request Wednesday for an interview about the contempt charge.

His criminal case stems from Latino drivers’ complaints that they were singled out by race in Arpaio’s traffic stops while he made a name for himself as an immigration enforcer.

For more on the Republican Party, watch:

A federal judge, who was appointed by a Republican president, ordered him to stop the patrols but said Arpaio prolonged them because the sheriff believed his immigration enforcement efforts would help his 2012 campaign.

This election, his opponent has criticized Arpaio for botching hundreds of sex-crimes investigations and being evasive in court when he is called in to account for accusations of failed leadership. Penzone ran a commercial showing deposition testimony in which the sheriff repeatedly says, “I don’t recall.”

The sheriff has a $12 million war chest and a strong fundraising advantage, enabling him to run TV spots over the last few weeks.

Penzone has raised $540,000 but gotten a boost from $300,000 in campaign mailers and commercials from an anti-Arpaio group funded by liberal hedge-fund tycoon George Soros.

Penzone and other critics have blamed Arpaio for costing taxpayers $48 million in the racial profiling case. The cost is expected to rise to $72 million by next summer.

In an interview earlier this month at his Phoenix headquarters, Arpaio refused to say when taxpayers could reasonably expect the financial hemorrhaging to end. The sheriff said he could not publicly discuss the case.

“You want to see me back over there again?” Arpaio asked, pointing several hundred yards away at the federal courthouse where he has been scolded for not fully embracing changes ordered by a judge.

Penzone said Arpaio has no one to blame but himself for the expenses and the criminal charge against him.

“Leadership means owning up to responsibility, and he refuses to own anything,” Penzone said.