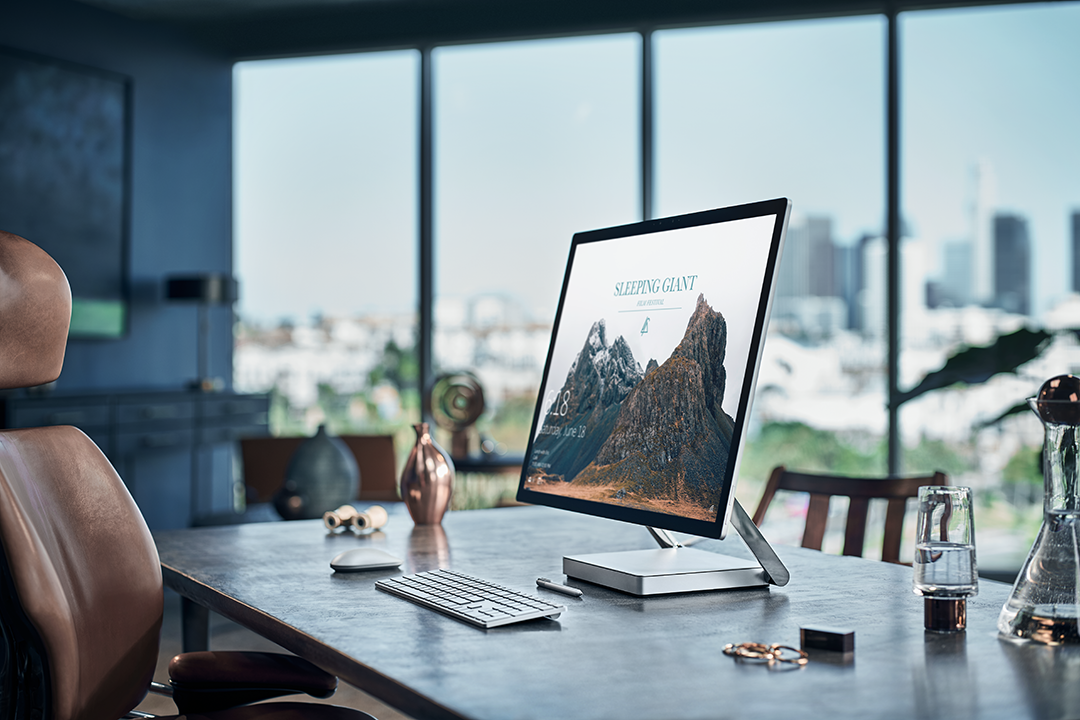 I’m flipping through a navigation app on the computer in front of me to see how I’m going to get to my next meeting. But I’m not touching the screen or using a mouse to browse the map. Instead, I’m twisting a tiny silver dial, about the size of the volume knob on my stereo system.

This is Microsoft’s new Surface Dial, an accessory it’s releasing for its new Surface Studio all-in-one computer, as well as a few other devices. The Studio, Microsoft’s first-ever desktop PC, offers a colorful and sharp 28-inch display and could go toe-to-toe with Apple’s iMac. I spent a few minutes using the Studio and Dial during a Microsoft press event on Wednesday.

With a starting price of $2,999, the Surface Studio is aimed at professionals looking to do much more than browse the Web or edit a few documents in Microsoft Word. To get the attention of said professionals, Microsoft designed the Surface Studio to work in some unusual ways. The Studio’s neatest trick is its flexible hinge, which lets you take the screen and pull it right down in front of you. That results in an angle that’s much more comfortable if you’re using the computer with a stylus instead of a mouse and keyboard. Making adjustments is as simple as grabbing the screen and gently pulling it down to your desired position. The Studio says firmly in place, even while you’re poking and prodding at it with Microsoft’s Surface Pen stylus or Dial accessories.

The Surface Dial, meanwhile, is like a modern mouse for the touchscreen age. You can use it with multiple apps and either affixed to the screen or sitting beside the Studio, depending on your preferences. It does something different in every app, often making it easier to be productive.

In the sheet music app StaffPad, for example, I selected a bar of music with the Dial to pick up its notes and move them to another section. In a navigation app, meanwhile, twisting the dial made it easier to zoom and tilt the map. Microsoft (MSFT) also demonstrated how it could be used by artists to enable new techniques, like changing the colors of a brush during a single stroke.

The Dial was generally easy to use, but in some instances I found myself struggling to remember the difference between similar gestures. For example, a quick tap on the Dial may launch a menu, while a deeper press may do something entirely different.

Based on my brief time with the Surface Studio, it’s clear that its potential lies in its unique adaptability. Still, the all-in-one PC market is crowded, desktop and laptop sales in general are slipping, and Microsoft rival Apple (AAPL) is expected to unveil new Mac computers in less than 24 hours.

But Microsoft is betting that its latest creation will appeal to professional creatives, who might view it as a handy new tool. Whether it succeeds will depend on whether it actually offers an experience to justify the high price.