What Trump Got Wrong About Leadership During the Final Debate 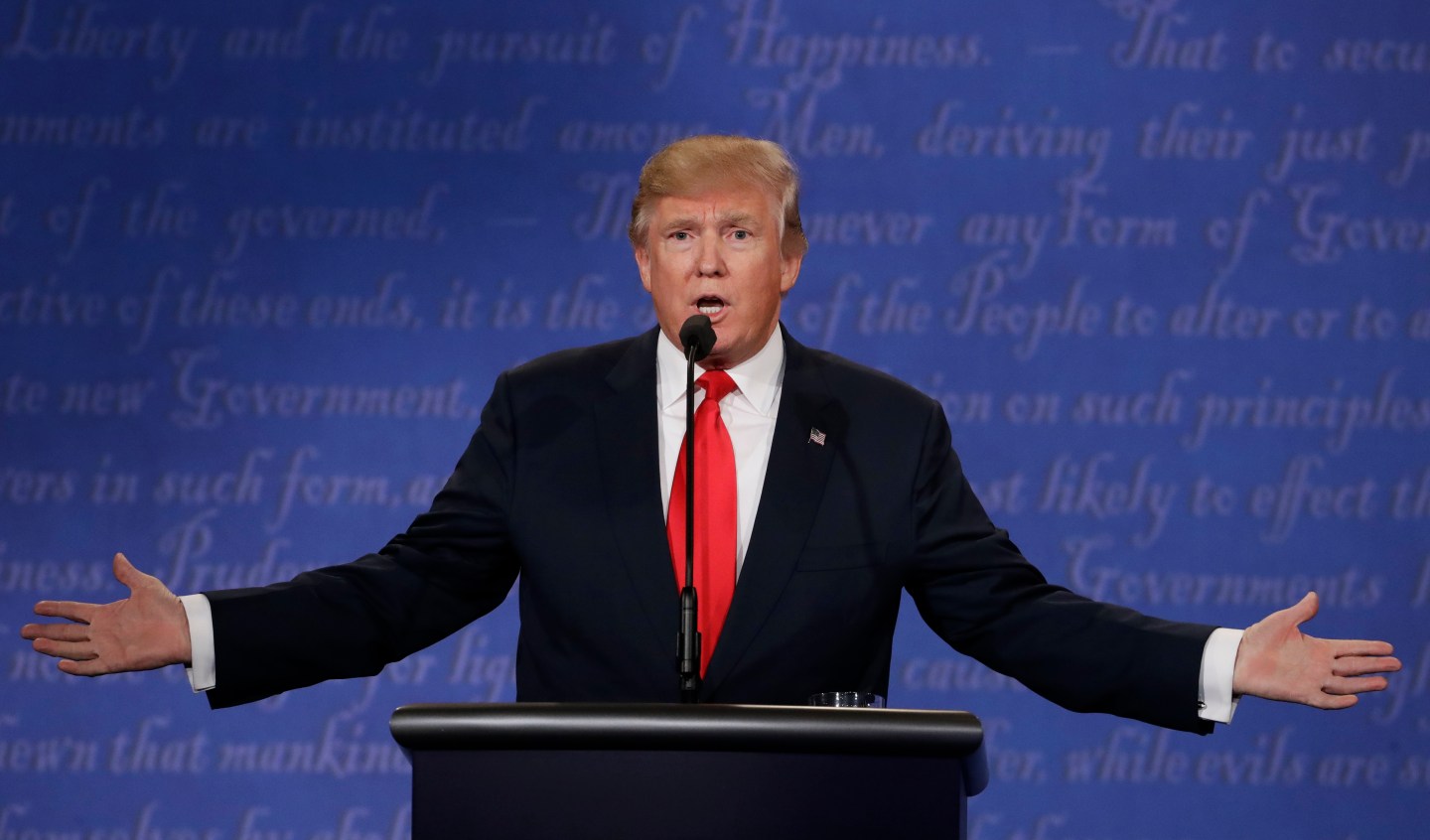 Franklin D. Roosevelt once said, “The only thing we have to fear is fear itself.” As an independent—with no allegiance left or right, conservative or liberal—I rely on values-based leadership principles to indicate how a presidential candidate is likely to deal with tough issues and challenges once in the White House. The role of a leader (especially a president) is to put things into perspective and keep people calm, just as Roosevelt did. And after last night’s final presidential debate, it’s evident that Hillary Clinton would be best at doing just that based on the qualities that I think make the best leaders.

Understanding yourself (and others)
Self-reflection is a foundational trait of values-based leadership, and refers to a person’s ability to be self-aware. Self-reflective leaders know who they are, their values, and what they stand for.

I find it hard to imagine anyone less self-reflective than Donald Trump, given his apparent inability to listen or respond to questions asked of him, answering instead with whatever he wants to say—and whatever might potentially stoke the fire for his base of supporters. Last night, for example, he interrupted Clinton’s answer on Social Security and called her “such a nasty woman.” And when asked about his views on immigration, resorted not only to rhetoric about building “the wall” on the U.S.-Mexico border, but said, “The single-biggest problem is heroin that pours across our southern borders.”

Clinton, in contrast, responded in a more calm and reflective manner to the questions. For example, when asked about taxation, the economy, and job creation, she gave comparatively substantive sound bites, such as: “One of the ways you go after the debt, one of the ways you create jobs is by investing in people. So I do have investments, investments in new jobs, investments in education, skill training, and the opportunities for people to get ahead and stay ahead.”

Balance and perspective are also key to truly great values-based leadership—leaders who have both take time to understand the thinking behind opposing points of view. They seek to understand before they are understood.

Without weighing the pros or cons of her responses, Clinton’s answers were more complete and well-rounded, indicating her ability to weigh various perspectives and opinions. For example, when asked whether, if elected president, she would impose a no-fly zone in Syria, Clinton responded that she believes “a no-fly zone could save lives and could hasten the end of the conflict,” but noted she was aware of the really legitimate concerns when it comes to negotiating with Russia.

On other issues, Trump went to the extreme, rather than pursuing balance, such as on the topic of abortion. In voicing his opposition, he said, “In the ninth month, you can take the baby and rip the baby out of the womb of the mother.” Even those of us who, because of religious convictions, are opposed to abortion, realize the importance of understanding why a woman would pursue this option, even if we disagree. Trump, however, seems more interested in shock value than balance.

Knowing your strengths and admitting your weaknesses
Self-confidence is a concept that most people are familiar with, and which is certainly on display in any political campaign. But true self-confidence, which I define as having the confidence to know your strengths and admit to your weaknesses, is another matter. Two tests of having true self-confidence are: (1) having reached the point where you are comfortable to say, “I don’t know, but I’ll get the answer for you quickly,” and (2) being willing to say, “I was wrong.”

Based on the debate, both candidates displayed self-confidence, but neither scored any real points for true self-confidence. For Trump, admitting to being wrong in his treatment of women would be a step in the right direction. For Clinton, true self-confidence would allow her to bring out her humanness in making difficult decisions as secretary of state, knowing that history will judge her in hindsight.

Practicing humility
Genuine humility encompasses two important, and sometimes undervalued, aspects of leadership: showing respect to all others and never forgetting where you came from. The “genuine” part underscores that it must be authentic; false humility is as distasteful as bravado.

I consider it virtually impossible to score Trump here because of the bullying and bombastic tactics he displayed during the debate. As for Clinton, her efforts to showcase her experience and competence do take away from the genuine humility—with one small exception: In commenting on her 30 years in public service, she concluded her recitation of accomplishments with, “I’ll let the American people make that decision,” with regard to her effectiveness.

In contrast with Roosevelt, Trump has stoked fears among Americans with his comments on immigration and his views about “bad hombres” and comments like “we’re going to get them out” of the U.S. Moreover, in his refusal to commit to results of the election, with claims that the election is “rigged” against him, Trump appears to be trying to scare Americans into believing that the American democratic process is corrupted.

Harry Kraemer is a clinical professor of strategy at Kellogg School of Management at Northwestern University. He is the former CEO of Baxter and the author of two best-selling leadership books, From Values to Action: The Four Principles of Values-Based Leadership and Becoming The Best: Build a World-Class Organization Through Values-Based Leadership.