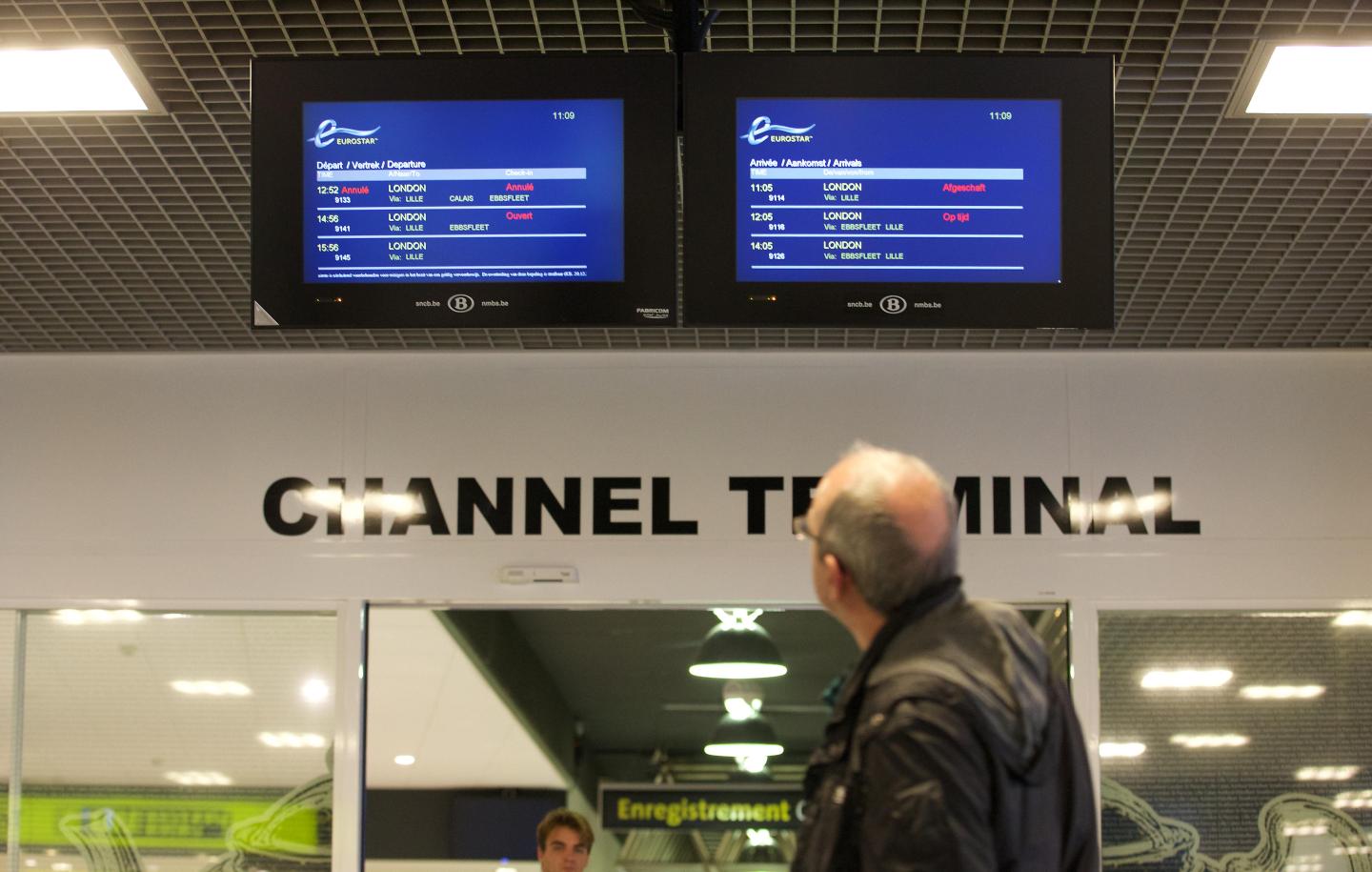 This picture taken on August 12, 2016 in Brussels shows screens displaying informations regarding cancelled Eurostar connections due to a strike of the staff of Eurostar. Staff on the Eurostar rail service between Britain and mainland Europe started four days of strike action today although the company insisted there would be minimal disruption to services. The Rail, Maritime and Transport Workers' Union (RMT) said its members should have "a fair crack when it comes to anti-social hours". / AFP / BELGA / NICOLAS MAETERLINCK / Belgium OUT (Photo credit should read NICOLAS MAETERLINCK/AFP/Getty Images)
NICOLAS MAETERLINCK AFP/Getty Images

Eurostar, the company that operates the train service through the Channel Tunnel between England and France, is to cut some trains and around 80 jobs as it struggles with a drop in passenger numbers in the wake of terror attacks in Europe this year.

Over the first half of this year, passenger numbers fell 3% and revenue fell 8%, according to Nicolas Petrovic, chief executive of the company that is 55%-owned by French railway operator SNCF. He added that the third quarter hadn’t shown any noticeable improvement.

In an interview last week with the French newspaper Les Echos, Petrovic had said, “The real subject is the climate created by the terror attacks,” referring to bomb attacks in Brussels and a string of incidents in France, the worst of which was the massacre of people watching a Bastille Day firework display in Nice by a radicalized Muslim man driving a truck.

But other factors have played a part too: SNCF workers went on strike repeatedly during the spring and early summer, while migrants at the notorious “Jungle” camp outside Calais, trying to enter the U.K. illegally, have disrupted traffic more than once, breaking through security fences in an attempt to walk through the 25-mile tunnel to Folkestone in England. Petrovic also admitted a “brief” impact before the U.K.’s EU membership referendum in June.

All of this happened at a time when Eurostar is introducing a new generation of larger e320 trains, built by Germany’s Siemens AG, which are capable of carrying 20% more passengers. The phase-in of the new trains started in December last year and will be completed next year.

“This is a challenging environment for all travel companies, and we need to manage our costs very carefully,” a spokesman for Eurostar said in an e-mailed statement to Fortune Tuesday. “That’s why we are looking at the size and shape of our business.” He added that the company wants to achieve the job cuts through voluntary redundancies and sabbaticals as much as possible.

Other travel companies in Europe have laid the blame for their recent woes at the door of Brexit. Earlier Tuesday, Irish-based Ryanair, the continent’s biggest airline by passenger numbers, cut its guidance for the current fiscal year, saying profit would only rise 7% instead of the 12% it had initially guided for. Although it’s flying as many passengers at it promised (it expects its planes to be 94% full on average this year), the drop in sterling means that it’s bringing fewer euros for every passenger that flies.