At Least 80 Dead After Truck Crashes Into Crowd in Nice, France 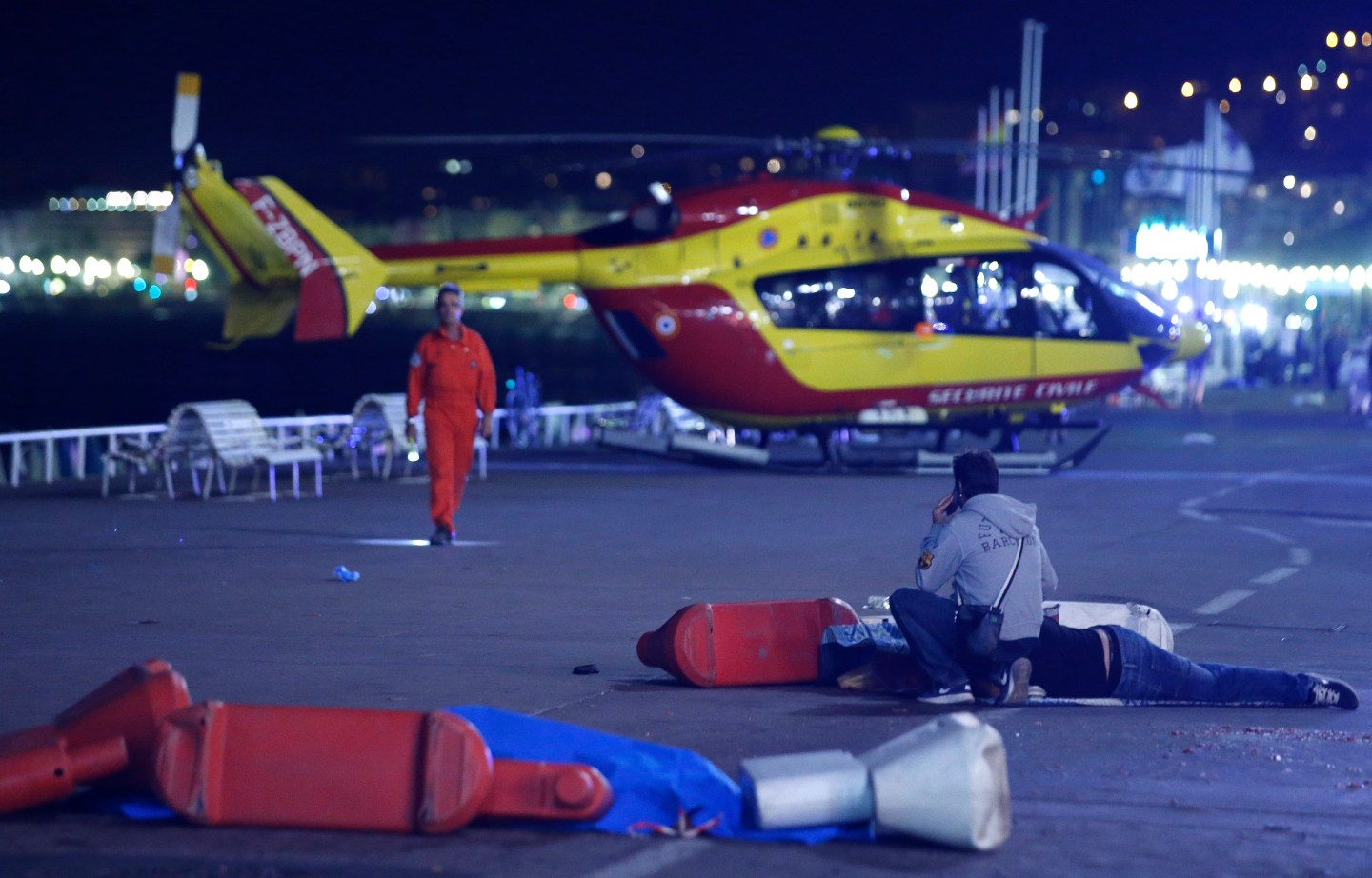 ATTENTION EDITORS - VISUAL COVERAGE OF SCENES OF INJURY OR DEATH - An injured individual is seen on the ground after at least 30 people were killed in Nice, France, when a truck ran into a crowd celebrating the Bastille Day national holiday July 14, 2016. REUTERS/Eric Gaillard - RTSHZ79
© Eric Gaillard / Reuters REUTERS

A large truck plowed into a crowd of people in the southern French of city of Nice on Thursday night, killing at least 80 people and leaving 18 in critical condition as the heavy vehicle mowed over its victims along hundreds of feet, according to police and government officials. The grim death toll jolted the entire country, which has been tenterhooks for months, wondering if and when another deadly assault might occur.

The incident occurred just as thousands of people poured on to the streets on a warm midsummer’s night to celebrate the country’s biggest public holiday of the year, Bastille Day, and to watch the fireworks display — a traditional feature in every city and village across France in the annual celebrations. The truck slammed into the crowds gathered on the city’s Promenade des Anglais, which runs along the Mediterranean seafront, and sent those who could escape screaming in panic as they fled the scene. The driver fired on the crowd before being fatally shot by police, officials said.

Christian Estrosi, the city’s former and current president of the Regional Council of Provence-Alpes-Côte d’Azur, said on Twitter that the attackkilled at least 77 people.

The scene in Nice was one of devastation, with the heavy-duty white truck stalled amid the bloodshed on the street, its windows smashed and riddled with bullets, from police gunfire. The Nice region’s president said that the truck was loaded with arms and grenades, according to the AP.

“There was carnage on the road,” eyewitness Wassim Bouhlel told the AP. “Bodies everywhere.”

Damien Allemand, a journalist with Nice Matin, wrote that he had been watching the end of a fireworks display just before the truck appeared and began to slam into people.

“I saw bodies flying like bowling pins along its route. Heard noises, cries that I will never forget,” he wrote.

“I could hear screams, cries ­and it looked like bowling, people were being thrown in the air ­ two or three meters high,” he said. “In front of my restaurant there were at least ten people laying on the street, dead.”

He said High Club, a nightclub next door, had been turned into a field hospital.

For France, the attack on Thursday night is likely to be deeply distressing — and to raise the question about how the country can possible avoid further attacks, given the extraordinary security measures already in place. What is more, Thursday’s mass deaths, if terrorism, will be the third terror attack in France in just 18 months; in January 2015 ISIS and al-Qaeda gunmen killed 17 people at the Charlie Hebdo satiric publication and a kosher supermarket, both in Paris. Then came the Paris attacks — a devastating blow, from which the country had only just begun to shake off the anxiety and grief.

By midnight, no group had claimed responsibility for the chaos. But regional police and local officials in the South of France quickly declared it a terrorist attack. They appealed for people to remain calm and went on television to tell people to stay indoors — clearly fearing that there might be multiple attacks on the streets, as there were in last November’s Paris attacks, when ISIS gunmen-suicide bombers opened fire on cafés and a music hall, killed 130 people. On Twitter, the regional mayor Christian Estrosi told Nice residents, “Stay for the moment in your homes. More info to come.”

France has been under a state of emergency since then, and thousands of armed soldiers patrol department stores, stations, and other public places. Security was hugely ramped up during the FIFA European Football Championships, which French officials feared could be a target of attack. Indeed, police in Nice evacuated a shopping center in Nice late last month, after a threat that a bomb would explode during the England-Iceland match being played in that city. There was a palpable sense of relief among the French after the championship’s final game last Sunday, that the monthlong tournament ended without an attack.

This article was originally published at Time.com. It has been updated from the original with additional information.