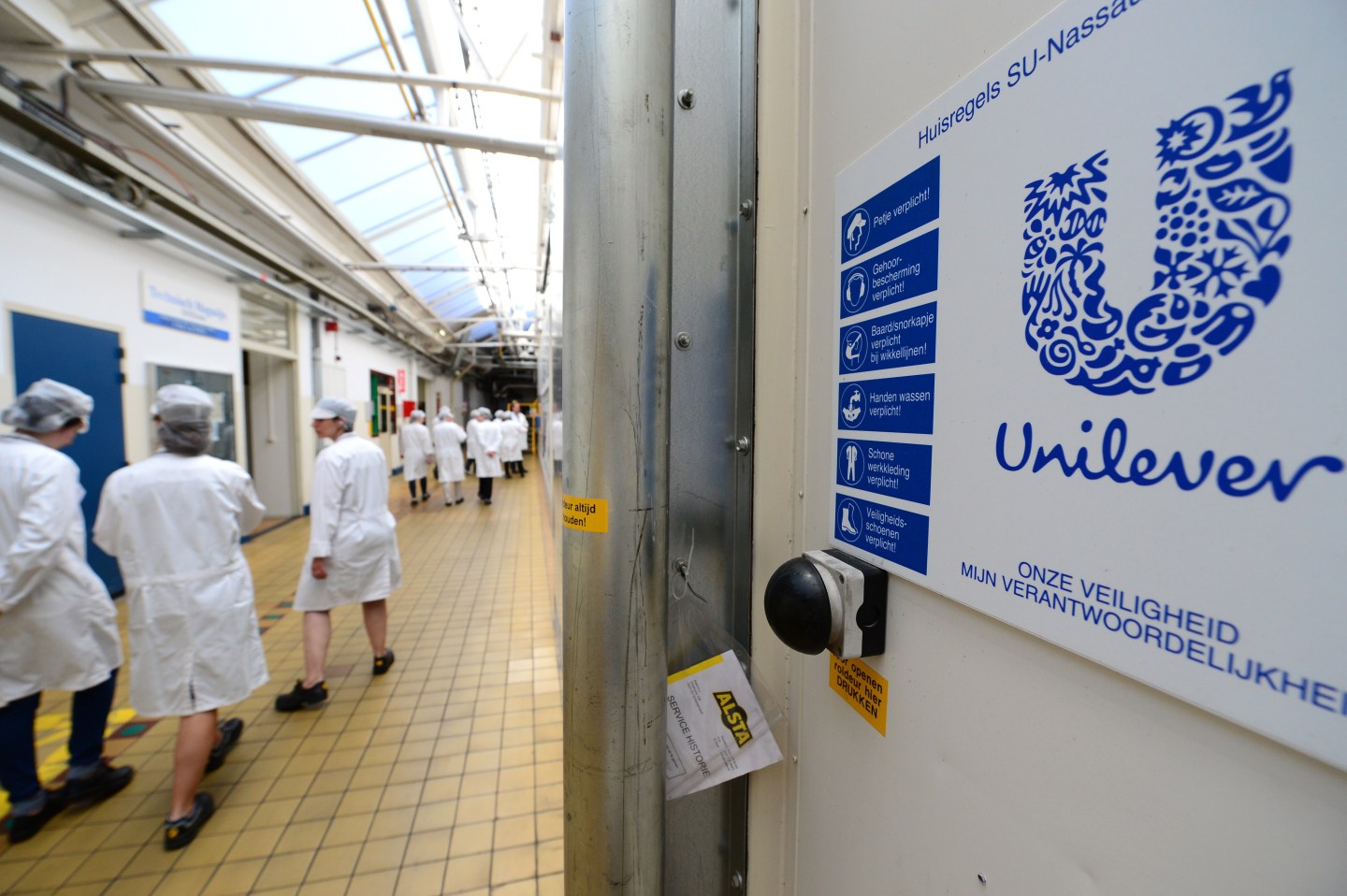 TO GO WITH AFP STORY BY JULIETTE RABAT - A picture taken on June 5, 2015 shows employees walking pass the logo of Unilever at the headquarters in Rotterdam. Unilever is a multinational company in the field of food, personal care and cleaning products. In 1930, Lever Brother, a British soap maker and Margarine, a Dutch company, merged to optimize their requirements and create the multinational Unilever. AFP PHOTO / JOHN THYS (Photo credit should read JOHN THYS/AFP/Getty Images)
Photograph by John Thys—AFP/Getty Images

Britain’s biggest retailer, Tesco settled a pricing row with Unilever after halting online sales of goods produced by the Anglo-Dutch giant in a dispute caused by a plunge in the pound since Britons voted to leave the EU.

The dispute between Tesco and one of the world’s largest consumer goods companies was a first clear sign for consumers of the turbulence unleashed by the Brexit vote and of how it could hurt them.

Products such as Persil washing powder, Ben & Jerry’s ice cream and Marmite—a brown yeast-extract spread with a like-it-or-loathe-it reputation—had been unavailable on the website of Britain’s largest online grocer on Thursday.

Both sides declared the spat over on Thursday. “We’re pleased this situation has been resolved to our satisfaction,” a Tesco spokesman said. Unilever (UL) also said the supply situation in Britain and Ireland had been successfully resolved.

The June 23 vote to leave the EU took many investors and company executives by surprise, unleashing the biggest one-day fall in sterling against the dollar.

The pound’s fall—it is down 19% against the U.S. currency and about 16% against the euro—has left suppliers and retailers battling for profits as imported goods become more expensive.

That fight appeared to spread to supermarket shelves. Supervalu, Ireland’s largest supermarket, said it was also holding negotiations with Unilever over pricing and could “experience some supply issues on certain Unilever products.”

Bruno Monteyne, a former senior Tesco (TSCDY) executive who is now an analyst at Bernstein, said Tesco has typically one to two weeks’ stock.

“While politicians can deny reality, a shampoo produced on the continent is now 17% more expensive,” he said. “This isn’t about Tesco or Unilever but about all UK retailers and suppliers.”

“If people are worried about losing Marmite from Tesco, wait until they find out about jobs…,” said Wes Streeting, a lawmaker from the opposition Labour Party who backed the Remain campaign in the June 23 referendum.

The pricing row reflected the tensions building throughout the system, with Tesco the one retailer big enough to push back against Unilever’s demands and Unilever one of the only suppliers powerful enough to stand its ground.

The standoff dominated the news in Britain on Thursday, with “Marmitegate” trending on Twitter and “Marmite Wars” splashed on the front pages. The Daily Mail dubbed it “Brexit Blackmail.

It also has a personal dimension as Tesco boss Dave Lewis was previously a senior executive at Unilever, where his radical overhaul of the firm’s businesses won him the nickname “Drastic Dave.”

An executive at a rival consumer goods company that has not pushed for UK price increases said it was “absolutely brilliant positioning” by Tesco and no coincidence that the news broke on Wednesday, the eve of Unilever publishing financial results showing better-than-expected sales growth due to pricing.

“This makes Dave Lewis look like a hero defending consumers,” the person said.

Two people familiar with the situation said Unilever had demanded 10% rises in the prices it charges Britain’s big four supermarkets—Tesco, Sainsbury’s, Asda and Morrisons—across a wide range of goods.

One said no other big consumer goods company had been as aggressive as Unilever on price demands while the second source said they had protested against Unilever’s demands as some of the products were made in Britain.

The sources said two of the big four were still weighing whether to accept the rises or scrap some products.

Unilever Chief Financial Officer Graeme Pitkethly said the increases were “substantially less” than what was needed to cover the hit from the pound’s fall. “We are confident that this situation will be resolved pretty quickly,” he said.

Tesco is rebuilding itself after a 2014 scandal when it acknowledged overstating profits and pressuring its suppliers into driving down prices. Last week Lewis hailed a transformed relationship with suppliers as a factor in the grocer reporting a 60% rise in first-half profit.

But he indicated it was not a given that suppliers should be able to recoup the cost of the falling pound as they had not always passed on benefits when sterling was much stronger.

Most analysts and economists believe sterling’s slump will lead to higher grocery prices, following years of deflation because of a price war between the big chains.