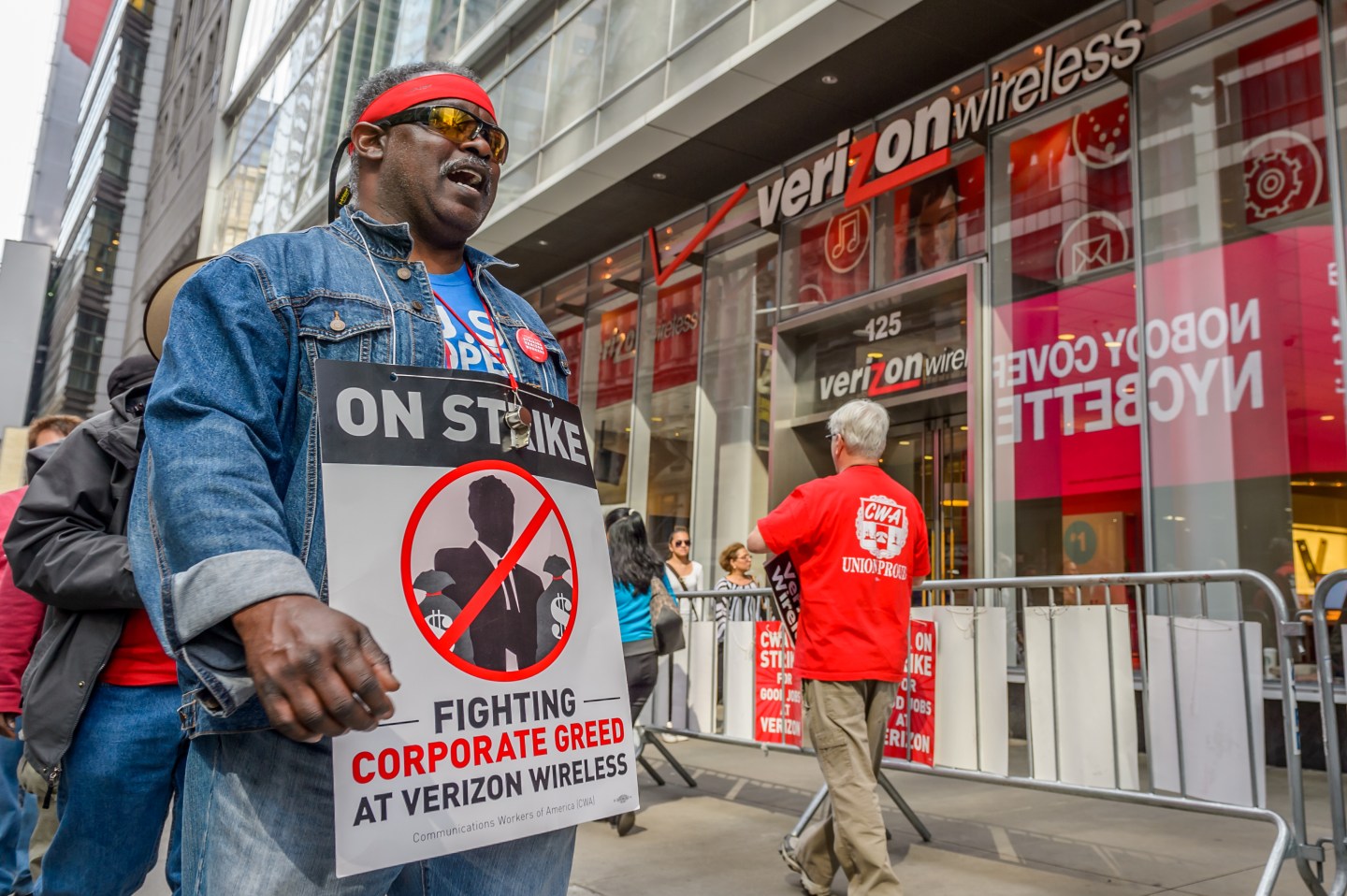 Probably the biggest issues in the bitter, seven week strike by workers at Verizon Communications this spring was job security—especially for call center employees. And the lowest point of the entire dispute came when striking workers went to the Philippines to see an outsourced call center and were chased through the streets by Verizon’s armed guards.

When the two sides finally reached agreement in May to end the strike, Verizon and the Communications Workers of America union pointed to enhanced job security at calls centers—plus a pledge by Verizon to hire even more U.S. workers—as a key piece of the new contract. “We’re especially proud of our commitment to 1,400 new hires—high quality and well-paying American jobs,” Mark Reed, Verizon’s chief administrative officer, crowed at the time.

So it was more than a bit surprising when Verizon disclosed on Thursday that it would be closing five of its U.S. call centers and reducing operations at two others. While workers will be offered an opportunity to transfer to remaining locations, up to 3,200 could be laid off, Verizon said. Workers were notified on Wednesday, which also happened to be the most holy day in the Jewish calendar, the holiday of Yom Kippur.

How could Verizon cut 3,200 call center jobs just a few months after pledging to expand its call center workforce? The answer lies in the split between the company’s unionized and non-unionized workers.

The workers who went out on strike worked in Verizon’s traditional wired telephone operations and newer FiOS cable TV and Internet unit. And no call centers serving customers in those units were affected by the just-announced downsizing.

Meanwhile, almost no employees who work in Verizon’s vast wireless unit are unionized. Unlike competitor AT&T (T), Verizon has harshly resisted unionizing efforts among its wireless workforce. And so those employees, and the call centers where they work, didn’t have the benefit of any collectively bargained protections.

Verizon (VZ) said the need for cost savings drove the decision to close the wireless call centers. The company also said it was letting go an undisclosed number of workers at its chain of wireless retail stores for the same reason. The once fast-growing wireless market has slowed, and Verizon saw its wireless revenue shrink by 3% in the first half of 2016.

“The key driver behind this decision is to realign our real estate portfolio and customer service operations to make the best use of extra capacity in the remaining locations,” Verizon said in a statement. “This was a very difficult but necessary business decision. We value our customer service employees. They are highly trained, skilled and experienced and they will be encouraged to stay with the company.”

The contract agreement reached in May to end the strike did add a tiny number of wireless employees to the union, but the CWA said on Thursday it would continue pressing to make further gains in wireless.

For more on the deal that ended the strike, watch:

“CWA has been working with Verizon Wireless workers at call centers and retail stores, to help workers get the union voice and representation they want and so clearly need,” CWA president Chris Shelton said in a statement. “In fact, workers at VZW stores in Brooklyn, N.Y., and Everett, Mass., just won a first contract just this year. We will keep up the fight against ‘very greedy’ Verizon.”

So far, the union has made little progress in convincing wireless workers to join up. But Verizon’s latest round of cost cutting may change the situation.