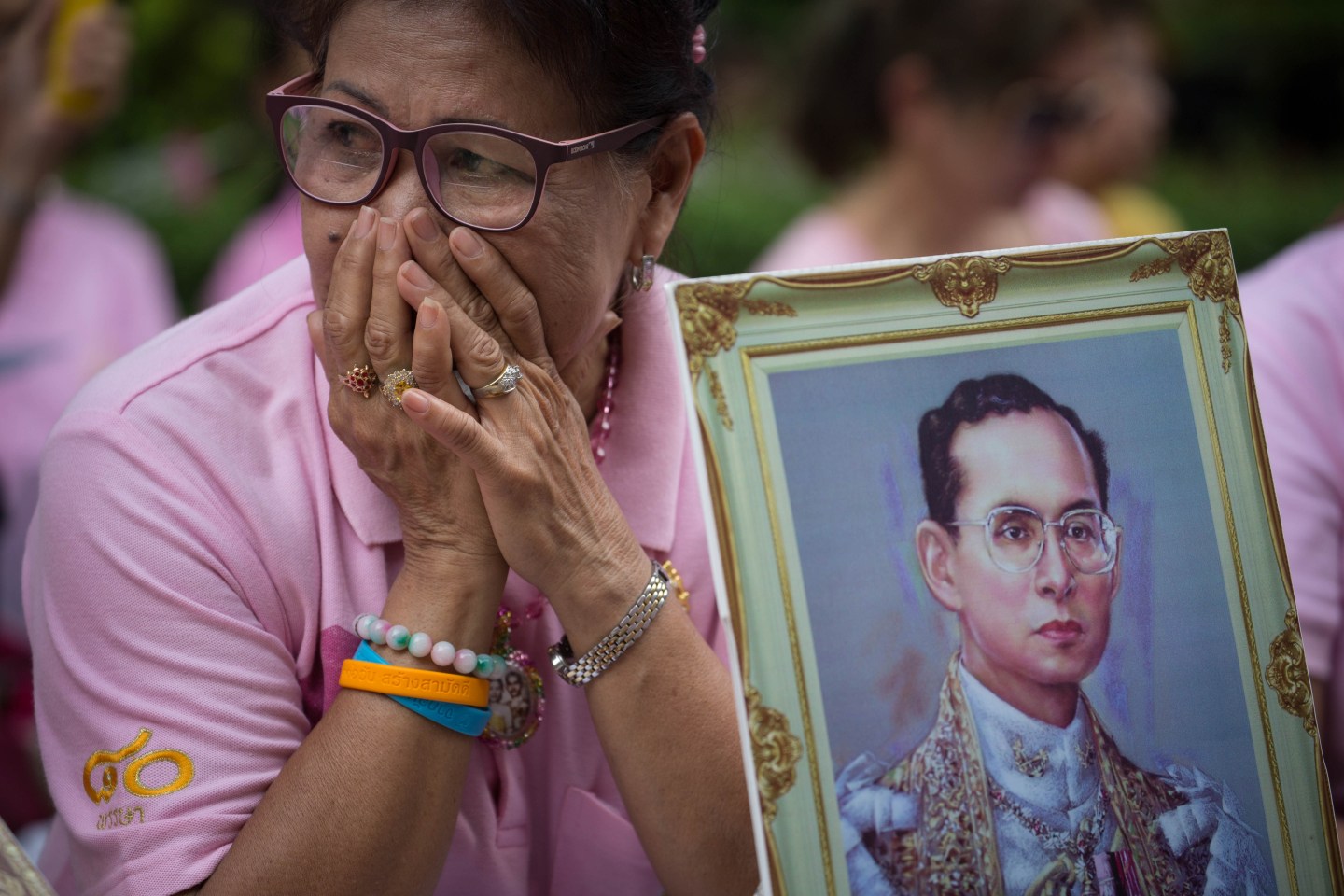 Thailand is unlikely to face major economic disruption after the death of revered King Bhumibol Adulyadej, although many people in the country will be grief stricken, some risk analysts and diplomats said.

The passing of the 88-year-old king, which followed a series of major health problems in recent years, was announced by the palace on Thursday.

Hundreds of people were gathered outside Bangkok’s Siriraj Hospital, many weeping. Crown Prince Maha Vajiralongkorn – who is expected to succeed his father – visited him earlier in the day.

Neither the government nor palace has released any plan for mourning and there was no immediate announcement of a succession. Three government spokesmen declined to take telephone calls on Thursday for comment on this story.

The military government has pushed through a new constitution that it hopes will ensure its oversight over stable government for years to come and it looks firmly in control for a royal transition.

The government might postpone to 2018 a general election scheduled for next year, and Thai stocks and the baht currency are likely to be volatile immediately after the king’s death, the Eurasia Group of risk analysts said in a report issued before the announcement of the king’s death.

But given a smooth transition, major disruption is not expected, according to five diplomats in Bangkok who spoke to Reuters.

“We expect the royal succession to designated heir Crown Prince Maha Vajiralongkorn will be stable and that market volatility around the king’s death will not be long-lasting,” Eurasia Group said.

Overall, the impact on the investment environment will be “relatively minor” and limited to what is likely to be an initial mourning period of 100 days, it added.

The Stock Exchange of Thailand’s benchmark index fell as much as 6.9 percent on Wednesday to its lowest since March 1, but recovered to close down 2.5 percent.

It closed 0.47 percent up on Thursday before the announcement of the king’s death.

Nordea Markets’ chief analyst Amy Yuan Zhuang, based in Singapore, said the economy was not as sentiment-driven as the baht, which could be vulnerable to capital outflows.

“We have only seen two or three days of net outflows from the local equity and bond markets and the sizes are not very big,” Zhuang said before the announcement of the king’s death.

But she added that outflows could increase.

Thai business leaders say privately they are confident the military government will ensure a smooth transition.

King Bhumibol was widely loved and most Thais have known no other monarch. Although his health had been poor for years, many will be shocked and deeply saddened by his death and will wear black and make offerings at Buddhist temples.

A royal cremation is likely to take months to prepare, according to palace tradition and two royal funerals over recent decades. Mourning rituals in temples are likely to be observed for many months, perhaps even years, if recent royal funeral rites are repeated.

Companies are likely to postpone some kinds of events, such as product launches, for the initial mourning period, the Eurasia Group said.

An officer at a Western embassy in Bangkok said airports were not likely to close for any length of time, given Thailand’s heavy dependence on tourism. Perhaps bars would close for a few days, but beyond that, things should return to normal fairly quickly, the diplomat said.