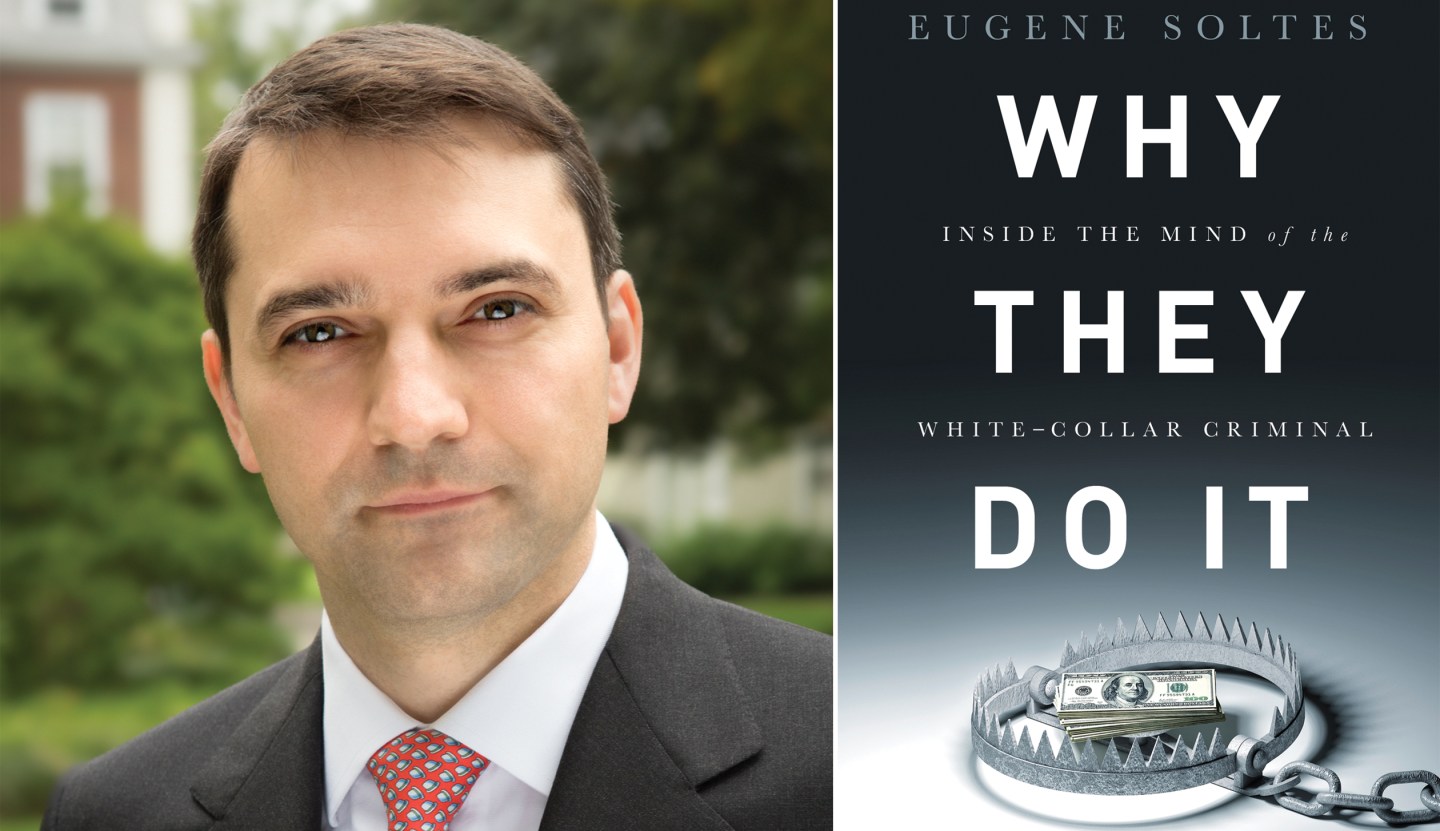 Who knows what evil lurks in the hearts of men? Eugene Soltes does, at least if the men are disgraced corporate executives. Soltes, an associate professor at Harvard Business School, struck up relationships—mainly by phone, email, and letter—with close to 50 prominent white-collar criminals in order to learn what made them tick, why they blew it all, and what, if anything, distinguishes them from us. He eventually got to know Ponzi schemers Bernard Madoff and Allen Stanford, former Tyco CEO Dennis Kozlowski, Enron CFO Andy Fastow, ImClone CEO Samuel Waksal, McKinsey partner Anil Kumar, KPMG partner Scott London, and many others.

The resulting book, Why They Do It: Inside the Mind of the White-Collar Criminal (Public Affairs, 447 pages), comes out October 11. For this article, Soltes also struck up a brief telephone relationship with Fortune legal affairs writer Roger Parloff, though he has not yet been convicted of anything.

Fortune: When did you start working on this project and why?

The project began almost a decade ago, although at the time it wasn’t even a scholarly endeavor. It was just my curiosity. I was a graduate student, finishing my doctorate at the University of Chicago School of Business. One night I was working on my dissertation, which involved a large empirical dataset, and was waiting for some data output. I was watching TV and came across a show on MSNBC called Lockup—a cross between a reality and documentary show.

It was about criminals—mostly violent offenders. From this I started wondering: What about all the nonviolent offenders—like the executives I’d read about in the papers. That spurred me to write down the first ten questions that came to mind and to send letters to a number of prominent white-collar criminals. That led, down the road, to this project.

Were most the white-collar criminals fundamentally like you and me, or were they sociopaths?

By and large, they were like us. That’s one of the main things I took away in this project.

Once they’ve been indicted or convicted, we tend to distance them from ourselves and say we’d never do this. We’re not like them. But when we look at their errors more carefully, they’re actually ones we are all susceptible to making. The main difference is that we are not generally in those types of leadership positions that when we make an error it actually has that kind of cataclysmic consequences on thousands or tens of thousands of people.

The main challenge that not just managers face, but that we all face as humans, is that we’re not hardwired to detect harm that we’re doing when the harm is distant. It’s not enough to know the difference between right and wrong. One actually has to feel that one’s actions are harmful to avoid going forward. So take something like insider trading. You don’t see the victims. It’s actually impossible in many instances to identify who those victims are. So it’s not surprising that if you engage in insider trading, there’s not going to be any internal alarm screaming out that you’re engaging in some extraordinarily heinous crime.

So I could sit in a room all day with these executives and never be worried about them going into my back pocket and taking $5 out of my wallet. They’re socialized. They wouldn’t do that. Yet many of these individuals—I’ve held stock in some of their firms—they’ve taken actually far more than that out of my retirement account, or my stock account. But they don’t feel any kind of deep harm in doing so. That’s a discrepancy.

Was Bernie Madoff a sociopath?

Out of all the individuals I’ve spent time with, Madoff is different. Unlike other managers, Madoff knew his victims in intimate ways—they were family, friends, people in his religious circle.

Madoff is a brilliant individual. Cordial. Open. I see why he was such a successful manager in terms of bringing people into his fund and taking on this leadership position. But he doesn’t feel a great deal of remorse for his actions. He’s simply less empathetic.

Did most people feel remorse?

Very few. That was something that did surprise me. That’s something I found puzzling for awhile until I started appreciating the fact that it’s hard to feel deep remorse if you don’t actually see the people whom you’ve hurt. You read that you’ve harmed the integrity of the markets—but that doesn’t resonate internally with us very well.

Do you think any of the people you met were actually innocent?

There were a couple cases where the penalties they faced seemed quite remarkable. One person that particularly resonated with me Scott Harkonen, the CEO of a biotech firm called InterMune. In his case they were developing a new drug for a fatal lung disease called IPF (idiopathic pulmonary fibrosis). They ran this trial. When the results came back, they found some things potentially working, and other things weren’t quite so successful. They put together a press release describing all the technical detail, all the nitty gritty. But they started the press release at the top saying that the trial demonstrated that this had some success in treating IPF. A number of years later the government went after them for fraud, saying that “demonstrate” was misleading. And in his particular case, I’d say the word “suggest” would probably have been a more conservative way of framing it. But he faced up to 10 years in prison, which is what the government sought.

And I look at the current political discourse, and some of the things that our potential leaders are saying, and how they frame them, and I think of how Scott Harkonen faced ten years in prison because he used the word “demonstrate” rather than “suggest”?

The two major presidential candidates have each been accused by their critics of criminal wrongdoing. How do their personalities and temperaments stack up against those of the people in your book? [This interview took place before disclosure of the 2005 Access Hollywood video in which Republican candidate Donald Trump made lewd comments about groping women.]

There’s a trait associated with being a leader of any large firm. We have people who are CEOs and CFOs come regularly to Harvard Business School and there’s a lot of similarities. You don’t become head of large firm by luck. There are some characteristics of temperament that allow you to get there. Temperament, discipline, and self-control are crucial.

I think Secretary [Hillary] Clinton has said about her email server: This was a mistake. It was a lapse in judgment.

And then I think what we’ve seen from Mr. Trump is, he’s struggling to maintain that discipline and temperament in any consistent way. It’s actually being able to maintain discipline and control under stress, under different circumstances, which is, it seems to me, one of the most important characteristics of being a successful leader. This is what took down the people I’ve been speaking with, who are, in many cases, really remarkable individuals. Brilliant individuals. And when you see the mistakes they made, and how that has changed their lives and careers and harmed others, it is really remarkable and humbling.

So when I look at the political candidates, I think of that. It doesn’t require very many mistakes to have really catastrophic consequences not only for their own careers, but for those around them. In the business context, the victims are shareholders. But in politics, the victims would be us, and citizens of the world.