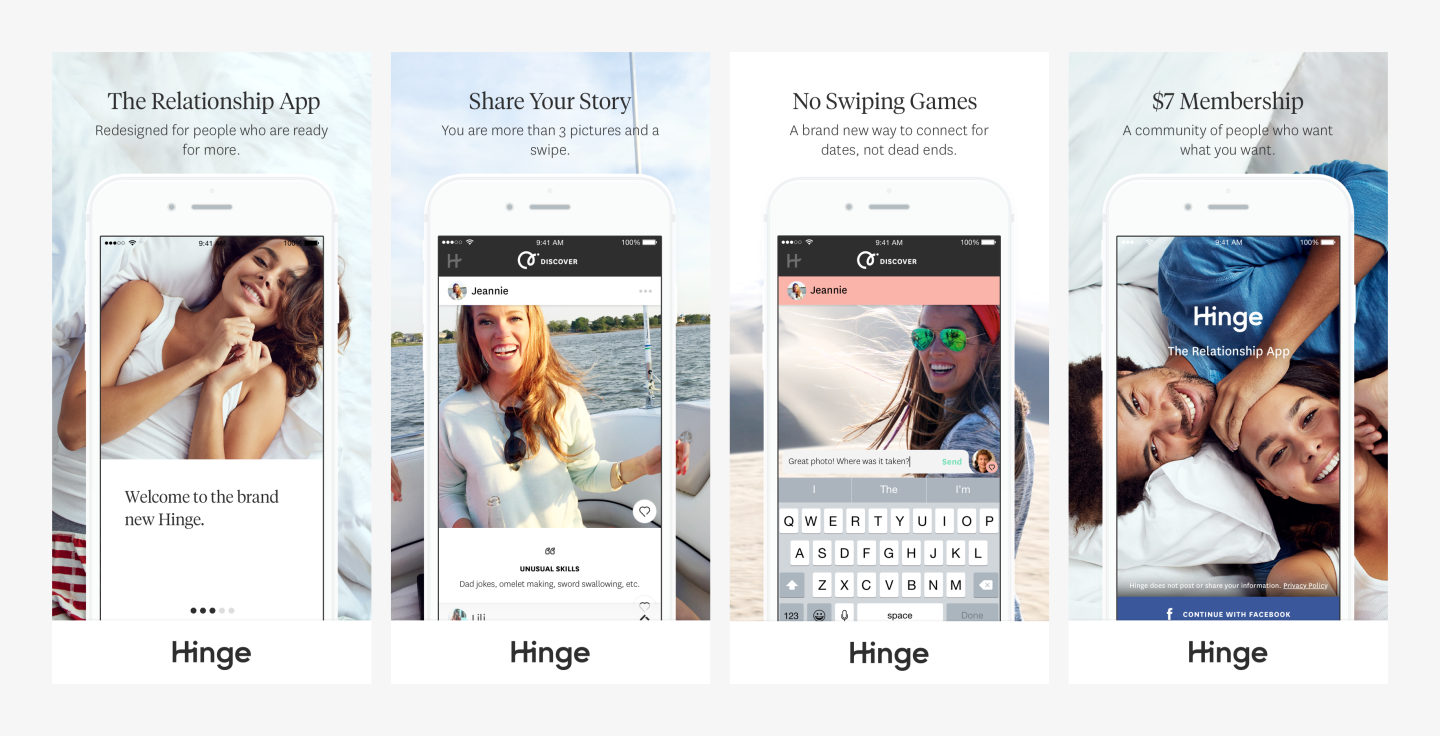 As a young man walks into a theme park, the words “Dating Apocalypse” illuminate the entrance. As he pulls out his smartphone and swipes through a seemingly endless stream of women’s photos, he realizes he’s surrounded by zombies. Worse: the park is filled with games called names like “Ghosted” and “Swipe Out”—much too close to the reality of dating today.

But as he spots an exit door and opens it, the song that was faintly playing in the background hits the chorus loudly: “What about love?”

Echoing the lyrics of the 1980s hit playing throughout its new promotional video, Hinge, a New York City-based startup best known for its dating app that matches users with friends of friends, wondered how it could better help singles get into real romantic relationships, instead of an endless stream of profile photos. After almost a year of quietly working on a new approach to online dating, Hinge is revealing on Tuesday its new app, which it describes as a “relationship app,” rather than the common “dating app” label that is commonly given to similar services.

“The whole thing was designed around matching you with more and more people,” co-founder and CEO Justin McLeod told Fortune in an interview of his startup’s original app. “No one’s really invested in the experience, people are flaky, they’re there for all kinds of reasons.”

Though the Hinge team began to toy with new ideas as far back as the summer of 2015, a feature story by Nancy Jo Sales in Vanity Fair‘s September issue further confirmed that it should rethink its product, according to McLeod. In her controversial feature, titled “Tinder and Dawn of the ‘Dating Apocalypse,’” Sales paints a bleak picture of young daters, whose courtship rituals have turned into mindless games, fueled by too many choices, thanks to dating apps like Tinder and Hinge, and with little hope of finding meaningful connections.

“We realized this model was more fundamentally flawed and you can’t fix it with a timer,” said McLeod of the gimmicky features with which Hinge experimented, such as making connections expire after a certain number of days or adding additional personal facts to each user’s profile.

In the last several months especially, the team completely shifted its attention to the new app, which is radically different from its predecessor. While the old one was more akin to Tinder, letting users swipe through a large number of potential matches in their area, only narrowed down by preferences like age and gender, Hinge claims its new app is much more focused on helping users find meaningful potential mates.

Now, instead of a few profile pictures and information, such as where they work and their likes and hobbies, each user’s profile will look more like a timeline of photos and facts about them. The idea, according to McLeod, is to represent the user with more depth than just a stack of photos.

To strike up a conversation with someone of interest, a user has to “like” or post a comment on one—and only one—photo or other element on the person’s profile. If the other user is intrigued by the comment, they can tap the “Connect” button that appears and begin a chat. It’s like a digital pickup line, though McLeod was cautious to agree to the comparison, emphasizing that he hopes users will be thoughtful in their interactions and not post mindless comments left and right.

The new app will also cost $7 per month, and still rely on each user’s Facebook network of friends to match them with second and third-degree connections.

But with a flurry of dating apps and sites already out there, how does Hinge believe it can provide a valuable service to singles and even get them to pay for it?

In short, McLeod believes there’s no service out there focused on helping the younger generation—he defines Hinge’s target market as ages 25 to 35—find meaningful romantic relationships. According to him, the more serious apps and websites that exist, like eHarmony and Match.com, are tailored to older adults, while those geared toward younger generations, like Tinder and OkCupid, are designed to help users find more casual encounters.

And despite the common belief that “millennials” are only interested in casual dating, McLeod insists that many are actually interested in finding potential romantic partners. In fact, they’d even be willing to pay a monthly fee for the chance of hitting the love jackpot, he argues.

“As long as there are single people in the world, they’ll come to Hinge,” said McLeod.

McLeod founded Hinge in 2011. To date, the company has raised more than $20 million in funding from Shasta Ventures, Social Capital, Slow Ventures, and Lowercase, among others.