Who Had the Winning Body Language in Sunday’s Debate? 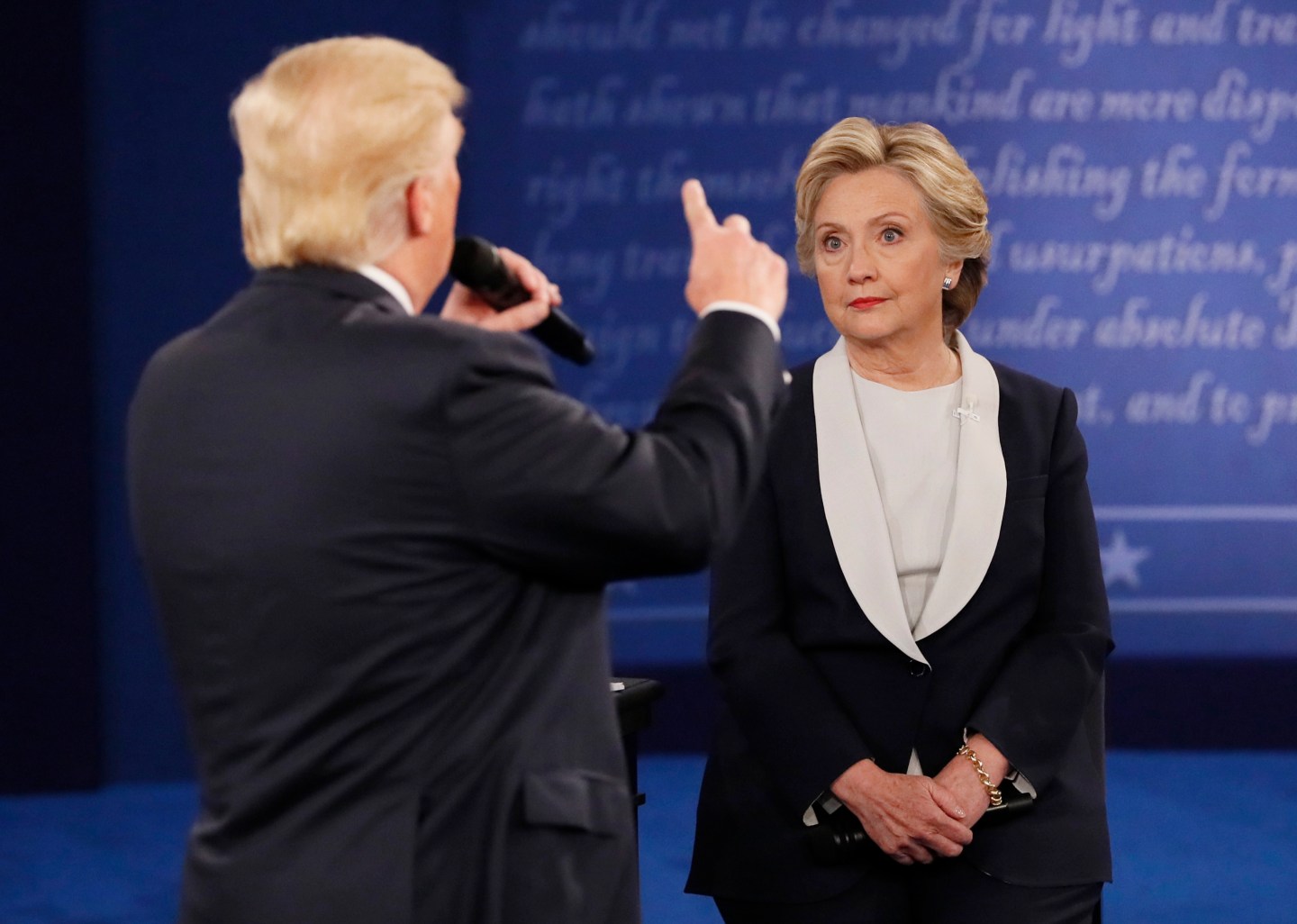 Who won Sunday night’s debate? Depends who you ask.

As a communication coach, I see things a little differently than many observers. Here’s my take on the matchup—viewed through the lens of the three pillars of effective communication: visuals (body language, gestures, eye contact, and gestures), vocals (voice tone, volume, sounds, and silence or pauses), and verbal, which focuses on word choice.

From the very start of the event, actions spoke louder than—and indeed before—words: Both candidates smiled and nodded at one another as they stepped onstage, but this time neither extended a hand to shake. Already their actions foretold that this debate was going to be different.

Even more interesting: the format of this face-off allowed both candidates to move around the stage as they addressed the live audience. Clinton was the first to confidently stride across Trump’s space to approach a questioner, always using their names in a very personal way. The camera frequently caught Trump—a good foot taller than his opponent—looming behind. He rarely walked into her space, but often paced in the background. In general, the GOP nominee seemed far more energetic, more confident than in the first debate. He gave Clinton fewer opportunities to smile and look amused—something that scored her needed likeability points in the first debate.

While apologizing for what he called the “locker-room talk” about women captured on the Access Hollywood tape, Trump kept his voice calm and his message brief, quickly attempting to turn the conversation to ISIS (“I will knock the hell out ISIS”). When he was hit with a second question about the tape, he again tried to reroute the conversation, this time to defending our borders. While these responses felt more like detours than segues, they did show that Trump was prepped to avoid dwelling on negatives—a mistake he made when facing questions about his tax returns in the first debate.

On the negative side for Trump, those sound effects from the first debate—the sniffing or snorting that launched a million tweets—once again punctuated his speech throughout Sunday’s contest.

Trump repeatedly aimed his insults and challenges directly to Clinton, facing her when he scoffed at her citation of Abraham Lincoln’s model for handling challenges.“Honest Abe never lied. That’s the big difference between Abraham Lincoln and you,” Trump said, jabbing a finger directly at Clinton as he said the final word.

In contrast, when criticizing Trump, Clinton rarely looked right at or pointed to him. She also chose to refer to the Republican contender as “he,” “him,” Donald, rather than a more direct “you.”

Perhaps Clinton’s most memorable line of the night came as she broadened the conversation from Trump’s comments about women to his views on other Americans, including Muslims, minorities, POWs, and people with disabilities. Belittling these groups is “who he is,” said Clinton. It is not “who we are,” she insisted

Both candidates are, of course, looking to grab a larger part of that American pie. Trump’s aggressive performance Sunday night seems likely to have succeeded in shoring up his core supporters, if not winning over the undecided. Those voters are clearly in Clinton’s sights. Perhaps that’s the reason she was more muted, only vaguely referring to potentially explosive topics like the erosion of Trump’s GOP support. Still, a dull knife is rarely a good thing, so look for Clinton sharpen up in their final meeting later this month. As Trump admitted, “She never gives up.” Sounds a lot like stamina to me.