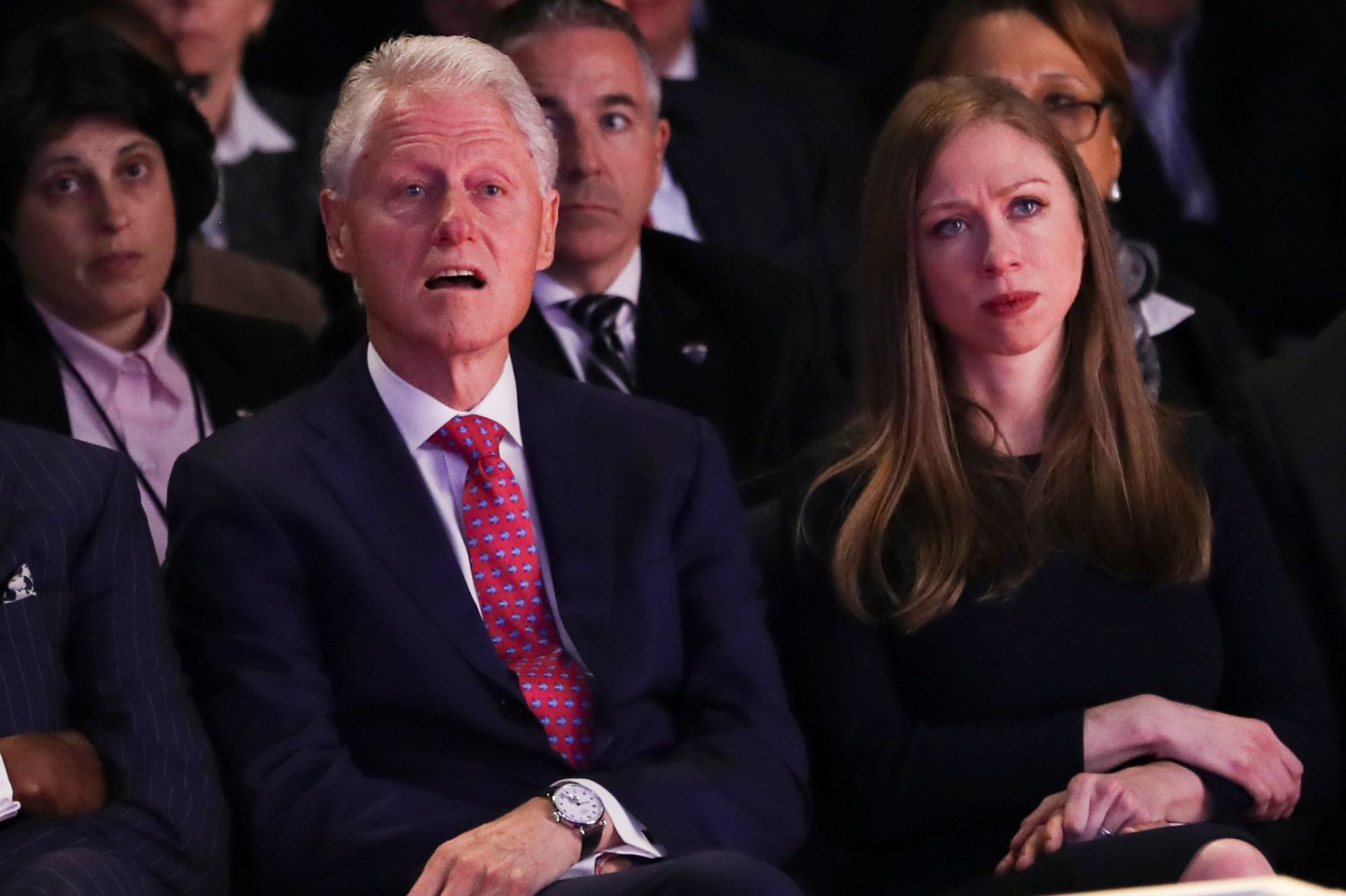 “Finally, a leading Democrat speaks the truth on Obamacare,” said Donald Trump’s campaign in an advertisement released Monday. “Can you imagine what he went through after making that statement?” Trump said at a rally. “Going to have to agree with Bill Clinton on this one,” tweeted House Speaker Paul Ryan.

Going to have to agree with Bill Clinton on this one… https://t.co/2k3LSplmER

But despite the furor, Clinton’s remarks were not much different from what his friends and family have already been saying in recent weeks.

As health-insurance premiums rise and problems with the law become more acute, Democrats have become increasingly comfortable criticizing President Obama’s landmark health care law. Progressive members of Congress have openly voiced their concerns on Capitol Hill, and the calls for reform have spilled out onto the campaign trail.

To be sure, the words used by Bill Clinton—who also said some Americans are “getting killed” by rising premiums and expenses—were more jarring than others. But his daughter, wife and even President Obama himself have voiced concern about the law in recent weeks as news about rising costs dominates the headlines.

“We know we need to work on the ‘affordable’ part of the Affordable Care Act,” Chelsea Clinton said at an event on Wednesday in Iowa.

Hillary Clinton has long called for improvements to the law, but stepped up her tone after a recent bout of pneumonia. “Lots of Americans still don’t even have insurance, or they do but it’s too expensive for them to actually use” when they’re sick, she said in Greensboro, N.C., last month. “So they toss back some Tylenols, they chug orange juice, and they hope that the cough or the virus goes away on its own.”

And earlier this week in Pennsylvania, Clinton said Congress needs “to fix the Affordable Care Act” by keeping “what works about it but improve it, get the costs down.”

President Obama himself, the chief promoter of his law and its enthusiastic spokesman, has spoken more critically of the law in recent months. In an interview with New York magazine published on Sunday, he said as much. “In my mind the [Affordable Care Act] has been a huge success, but it’s got real problems,” he said.

Aides say Bill Clinton simply misspoke on a message the campaign has used all along, insisting that the campaign’s message has not changed. Throughout the Democratic primary, Hillary Clinton and Senator Bernie Sanders often clashed on health care policy, with the Vermont Senator arguing for a single-payer system and Clinton advocating a more moderate approach that involved “building” on Obamacare and improving it.

Clinton and Democrats have praised the Affordable Care Act for providing health insurance to 20 million Americans, allowing people under the age of 26 to get insurance through their parents, and prohibiting insurers from denying coverage to people with pre-existing conditions.

Still, the tone of some of the criticism among Democrats has grown increasingly critical in recent months. Hillary Clinton has praised the act for widening coverage, but has spoken more about taking steps to fix it.

At least half of the Senate Democrats who voted for the bill are no longer in Congress, many of them voted out in the wake of the legislation. New members who did not cast a vote for the law are quicker to address the problems with it. And as it becomes more and more apparent that the law will need to be fixed, Democrats’ openness to changes has become more apparent.

The most prominent and detailed plan is Hillary Clinton’s. She has proposed several fixes that she says will reduce the cost of insurance and prescription drugs. Clinton’s plan is intended to assist those who are not poor enough to qualify for government subsidies, but not making enough money to comfortably pay for health insurance.

She would limit the amount that families have to pay on health insurance premiums for plans bought through the exchanges to 8.5%, a measure aimed at helping those who do not qualify for subsidies. She would create a public insurance option, which would compete with private insurance plans and theoretically drive down the price of premiums. And she would give tax credits of up to $5,000 for families still struggling to pay out-of-pocket costs.

Clinton published an op-ed in the New England Journal of Medicine late last month defending the act, but arguing it needs improvements.

“It strikes me as a move in the direction of affordability,” said Larry Levitt, a senior vice president at the Kaiser Foundation who has extensively studied the Affordable Care Act, said of Clinton’s proposals.

Republicans, meanwhile have called for Obamacare to be scrapped and replaced, potentially with a plan that involves tax credits instead of subsidies. Trump, meantime, has said he would encourage insurance plans be sold over state lines and eliminate the requirement that most Americans carry health insurance, two moves that would dramatically undercut the law’s current features.

But Clinton’s plans to tweak the Affordable Care Act, would require an acquiescent Congress. A Republican House of Representatives is unlikely to support a public option, and it is unclear what other pieces in her plan Clinton could pass without GOP support. Some health care policy experts say she could be forced to settle with implementing the smaller-grade fixes, like appointing more regulators to insure the insurance companies don’t monopolize markets and passing tax credits.

In a statement on Thursday, Jason Miller, the Trump campaign’s senior communications adviser, said Hillary Clinton should answer for her husband’s remarks, who has since repeated that he supports the law but thinks Congress needs to make improvements.

“Secretary Clinton, do you agree with your husband that Obamacare is a ‘crazy system’ that has a model that ‘doesn’t work?’” Miller said in a statement.

Clinton’s answer to that, however, is likely more complicated than Republicans might expect.