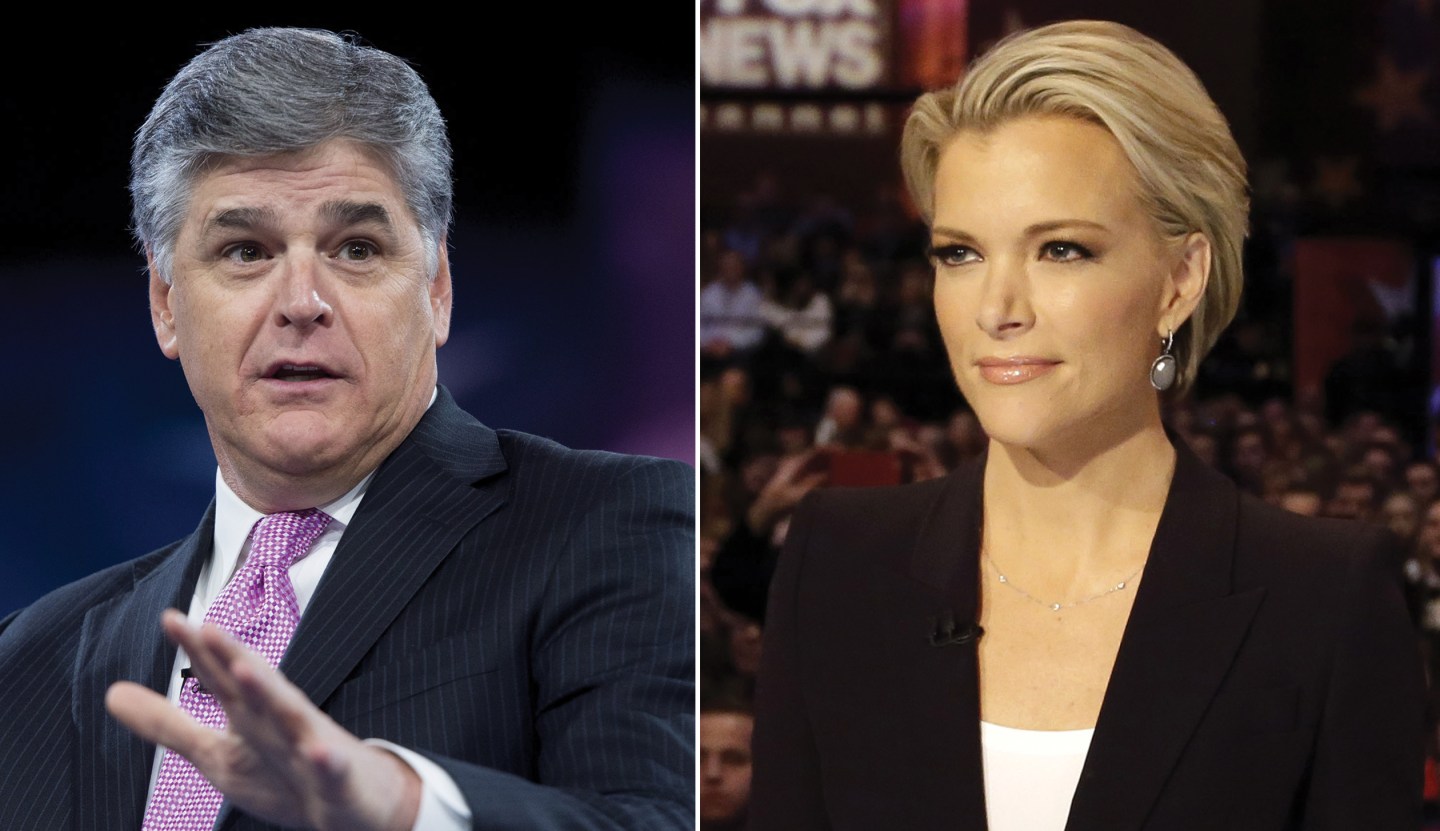 UPDATE: On Thursday evening, Megyn Kelly and Sean Hannity Tweeted a picture of the two of them together and smiling, with the caption “We’re Irish. It’s complicated. #friends”

On her show last night, Kelly called out both presidential candidates, Donald Trump and Hillary Clinton, for avoiding tough interviews in recent months. “They’re both in their own version of a presidential protection program.” Kelly also chided Clinton for sitting down for so-called “soft” interviews with the likes of Entertainment Tonight as well as entertainers Mary J. Blige and Steve Harvey.

But Kelly made a dig at both Trump and Hannity, the conservative Fox host who has been chummy with Donald Trump (and even appeared in a Trump campaign ad, praising the GOP candidate.) “Donald Trump, with all due respect to my friend at 10 o’clock, will go on Hannity,” Kelly said, “and pretty much only Hannity and will not venture out to the unsafe spaces these days, which doesn’t exactly expand the tent for either one of them.”

Hannity fired back at Kelly on Twitter, responding to a Mediaite post on the subject and telling Kelly to instead direct her criticism at Hillary Clinton, adding “Clearly you support her.”

@megynkelly u should be mad at @HillaryClinton Clearly you support her. And @realDonaldTrump did talk to u. https://t.co/vsQiNMgHut

Hannity referenced Trump’s primetime interview with Kelly on Fox this past May. Later, after a Twitter follower advised Hannity to “stand by your colleagues,” the Fox News host responded by writing, “Sure. When they stand by me.”

Tensions had reportedly been boiling behind the scenes between Kelly and Hannity. After last week’s first presidential debate, Kelly made a sly dig at Hannity, suggesting he isn’t a journalist (which is something Hannity has actually said of himself). When Hannity appeared on camera with Trump following the debate, she said on air, “We’ve got Trump speaking to our own Sean Hannity. We’ll see whether he speaks to the journalists in this room after that interview.”

Kelly told Variety in April that she’s not sure what will happen when her current contract with Fox News expires next summer and there has been plenty of speculation that Kelly could be gearing up to leave the network.

Before the recent departure of former Fox News CEO Roger Ailes (who is also reportedly advising Trump’s campaign) amid an investigation into multiple sexual harassment claims, Kelly was conspicuously absent from the chorus of Fox News personalities who initially voiced their support for Ailes. Now, as The Washington Post notes, Kelly’s spat with Hannity is yet another example of Kelly’s increasingly tense relationships with some of her colleagues and it could be the latest sign that she’s on her way out at Fox News.

Fortune reached out to Fox News for comment and will update this article with any response.