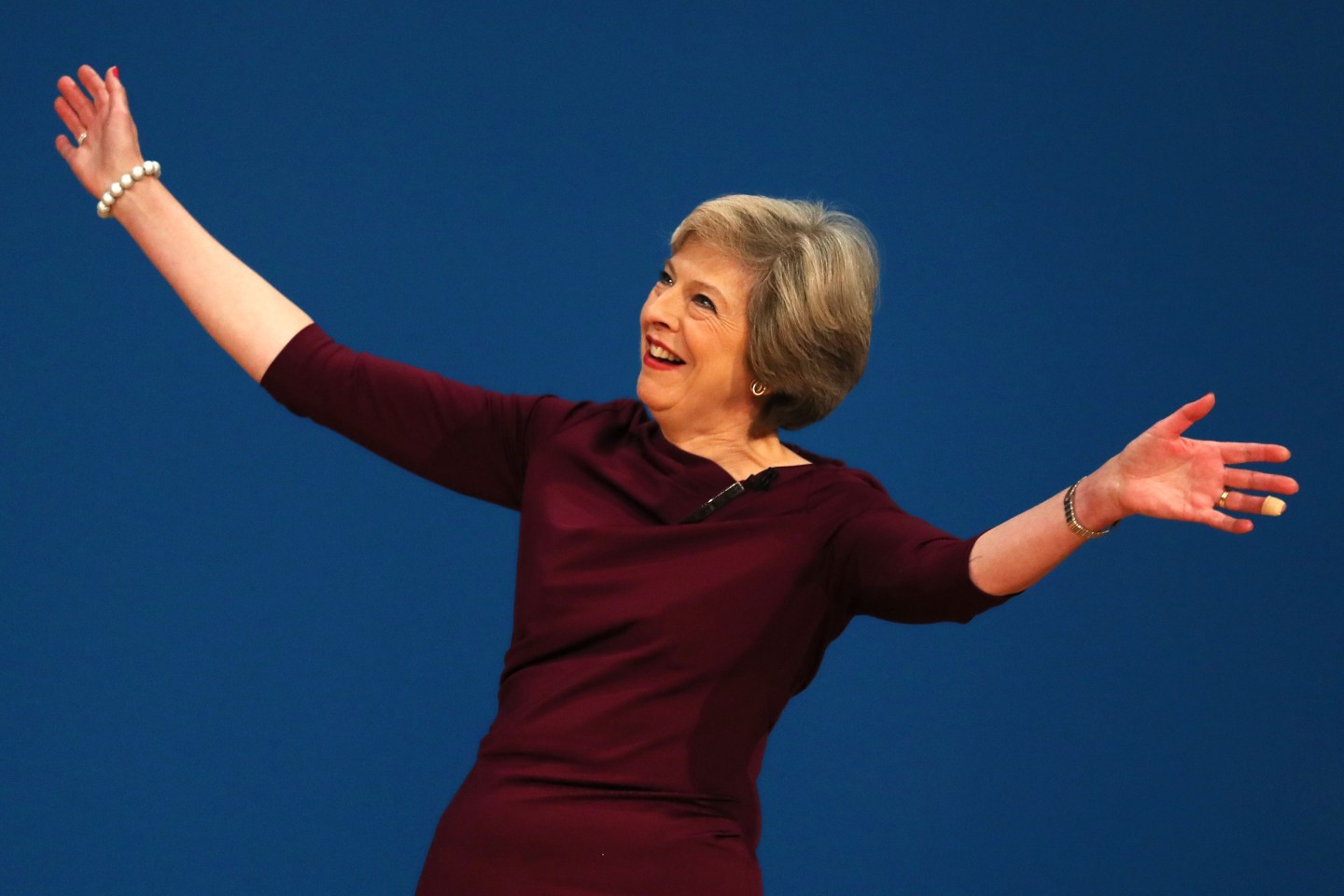 BIRMINGHAM, ENGLAND - OCTOBER 05: Prime Minister Theresa May delivers a speech during the fourth day of the Conservative Party Conference 2016 at the ICC Birmingham on October 5, 2016 in Birmingham, England. In her first speech to conference as Prime Minister Theresa May is expected to reach out to the centre ground and try to appeal traditional Labour voters. (Photo by Matt Cardy/Getty Images)
Photograph by Matt Cardy Getty Images

For the last 40 years, Britain’s Conservative Party has essentially been the party of Margaret Thatcher: free-wheeling, free-market, globalist. Not any more.

Theresa May, the second woman to be both Tory leader and Prime Minister of the U.K., signaled the clearest possible break with the Iron Lady’s legacy Wednesday, turning the party sharply to the Left in an effort to occupy and redefine a new center ground in the country’s politics amid the uncertainties of the post-Brexit era.

“There is more to life than individualism and self-interest,” May told the Conservative Party’s annual conference, appearing to assign a much bigger role for government than Thatcher had ever allowed. The words could hardly have refuted Thatcher’s dictum that “there is no such thing as Society” more clearly. May said she stood for a conservatism “that understands the good that government can do…We succeed or fail together.”

May took a page from her German counterpart, Angela Merkel, in stealing shamelessly from the playbook of rival parties: She bashed unscrupulous businessmen, tax dodgers, and their facilitators in the legal and accountancy professions (all traditional Tory voters). She promised to stand up for the working class against the rich and powerful, singling out familiar pantomime villains in retailing and regulated utilities. All that would have gone down well at any Labour Party conference. Equally, she talked about lifting working-class white youths out of poverty and unemployability, and tighter control of immigration in a nod to the right-wing U.K. Independence Party.

May’s dash for the political center has been made easier by the Labour Party’s leftward lurch under Jeremy Corbyn. Although an understandably opportunist move for May, it’s one that often had the air of making things up on the hoof, involving positions that don’t come naturally to a party that still, by and large, reveres Thatcher’s memory. And it was all accompanied by the nagging suspicion that there will be precious little money around to deliver on May’s promises if she can’t stem the economic damage from Brexit. The pound hit a new 31-year low against the dollar while she was speaking.

But there was one hint of a return to the Thatcher days—albeit not from an expected direction, and in an area of crucial importance to business. The Iron Lady didn’t always practice what she preached, and never gave up government control of interest rates. So ears naturally pricked up when, in a nakedly interventionist speech, May said that “change has got to come” to the field of monetary policy “and we are going to deliver it.”

Ostensibly, May was criticizing only the way that “super low interest rates and quantitative easing” had fostered inequality by pumping up asset prices. But in a world where few of the old certainties seem to hold any more, how much of a surprise would it really be to see the whole doctrine of central bank independence, dominant since the collapse of the Bretton Woods system in the 1970s, thrown overboard too?