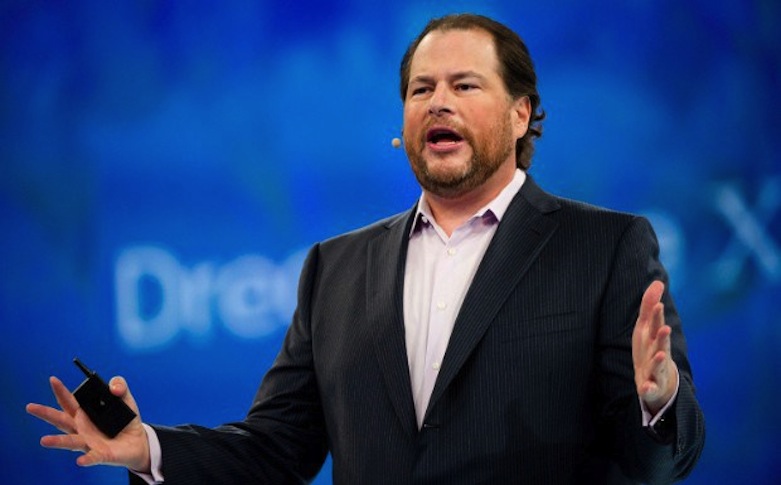 Salesforce co-founder and CEO Marc Benioff pointed out the common metric during an interview with CNBC’s Jim Cramer on Wednesday, amid rumors that the enterprise software giant is preparing a bid to acquire the social network. Benioff avoided answering Cramer’s questions about Twitter directly, instead focusing his comments on how his company carefully considers all potential acquisition targets.

“[Y]ou know, we’re the fastest growing of the top 10 software companies, and we have super happy customers,” said Benioff. “[B]ut at the end of the day, we still have to look at everything because one of the ways we innovated is not just organically, it’s also inorganically,” he added of his company’s acquisition strategy.

Commerce Cloud, for example, was born out of Salesforce’s recent acquisition of Demandware, a provider of e-commerce tools Salesforce (CRM) bought for $2.8 billion. According to the company, Commerce Cloud’s tools are used by 1,800 commerce websites in 53 countries. Salesforce has also been on an acquisition spree lately, gobbling up data analytics company Krux for $700 million earlier this week.

Over the last few weeks, rumors have been swirling that Twitter (TWTR) is looking to sell itself, after a failed attempt to turn its business around. Along with Disney and other potential acquirers, Salesforce is said to be considering the social media company after it was unable to purchase LinkedIn earlier this summer.

Will.i.am and Salesforce Team Up to Teach Coding to Kids

Still, Cramer questioned whether acquiring Twitter is the only way for Salesforce to expand into social media.

“Marc, you’re a great inventor. You can put this thing together, Twitter 2.0,” said Cramer. “Just make it better—you don’t need them.”

Cramer’s probing was met with little confirmation, one way or the other, from Benioff, who declined to comment on any specific deal his company could be considering.