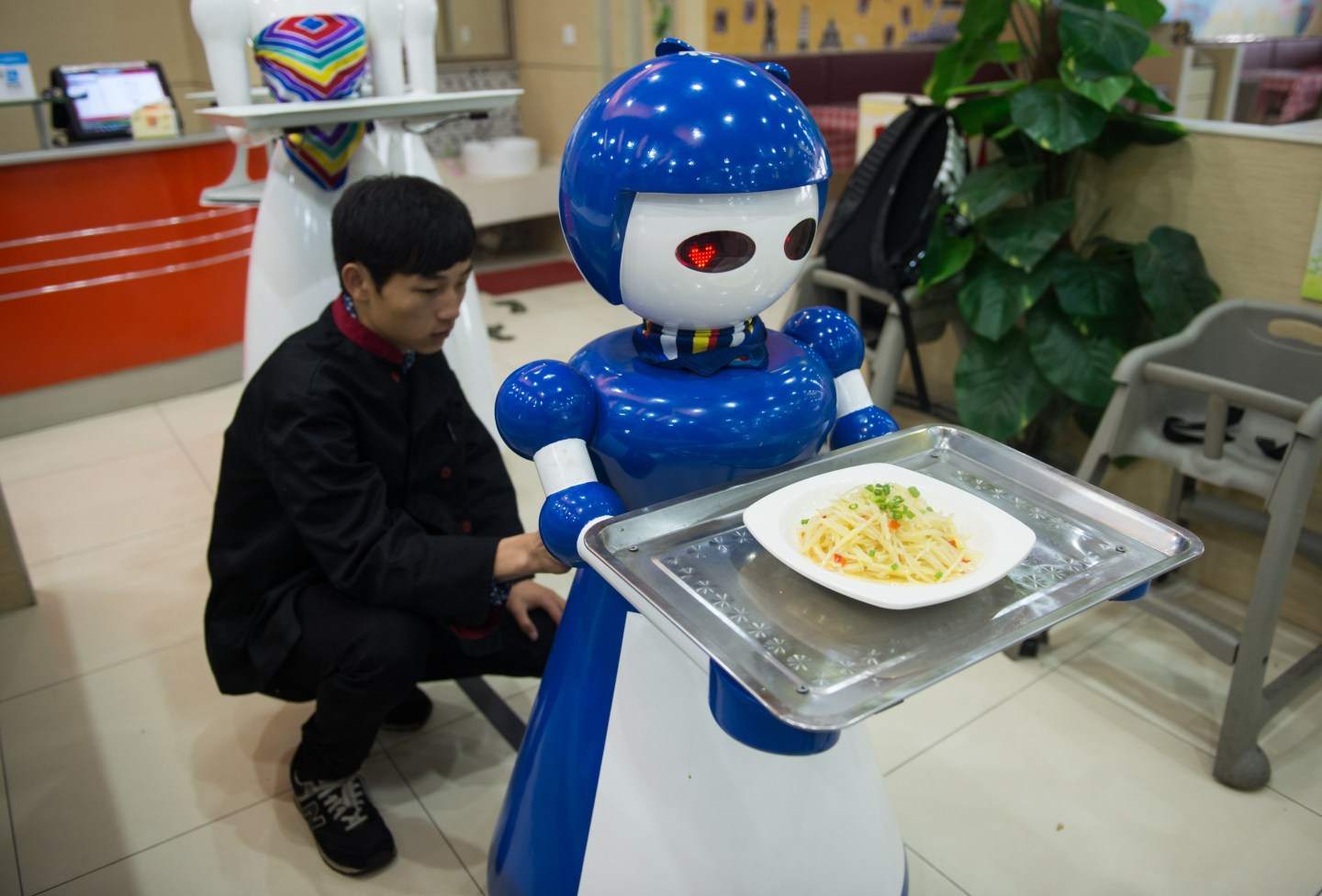 KUNSHAN, CHINA - MAY 22 : Robot waiters are seen working at a robot restaurant in Kunshan, China on May 22, 2016. The restaurant has a total of 10 robots in heights of 1.2 meters. Each robot costs 50,000 yuan and all used for delivery and cooking. (Photo by Zhong Zhenbin/Anadolu Agency/Getty Images)
Photo by Zhong Zhenbin — Anadolu Agency/Getty Images

Clamshell grills are making burger flipping obsolete at McDonald’s, Johnny Rockets and other burger chains. Digital kiosks, tabletop tablets and mobile phones are taking orders at eateries like Panera, Chili’s Grill & Bar and Domino’s. And at Silicon Valley start-up Zume, robots are being programmed to take over pizza assembly.

Such labor-saving devices have been held out as counterweights to efforts to raise the wages of the lowest paid workers in the United States. But the early evidence suggests robots and other forms of automation are merely reshaping the work of people in food service. They are not—as they have in banks, on factory floors and in other sectors—replacing them.

In spite of improvements in technology, minimum wage hikes between 2000 and 2008 caused little immediate displacement of workers by technology, especially in kitchens, according to a study by economists at the Federal Reserve Bank of Chicago and DePaul University.

There were slightly more workers per restaurant in 2015 than in 2001, according to data compiled for Reuters by the National Restaurant Association, which opposes minimum wage hikes.

And the U.S. Bureau of Labor Statistics has projected leisure industry jobs, a broad category that includes restaurants, will grow at 0.6 percent annually, keeping pace with the national average through 2024.

Automation in the restaurant industry looms large in the heated campaign to raise entry level pay to $15 an hour, more than double what U.S. federal law now mandates.

Restaurants employ more low-wage workers than any other industry, and their operators are among the most vocal opponents of minimum wage hikes. Several executives have said major pay hikes would force the fast-food industry to ramp up automation, an investment that would cost thousands of jobs.

Robotics researchers, restaurant executives, industrial engineers, consultants and economists said, however, automation in the restaurant and fast-food sectors is not as simple as installing automatic tellers in banks or employing robots to assemble cars.

While any rise in the minimum wage puts pressure on restaurant operators, they said a robot revolution in the $783 billion U.S. restaurant industry is still years away.

No, Robots Won’t Take All of Our Jobs

Sixteen U.S. states have increased their minimum wages this year, and some, including California and New York, will move over several years to $15 an hour. More states are considering such measures, and Democratic Presidential candidate Hillary Clinton has vowed to increase the federal minimum wage.

“It’s not like we’re at the precipice of a revolution where the minimum wage goes up, and all these jobs disappear,” said Ken Goldberg, a professor of engineering and director of the People and Robots Initiative at the University of California, Berkeley.

Many kitchen jobs still are too complex for robots, which can’t multitask and don’t necessarily work safely with humans in cramped spaces, experts said. While robots excel at complex calculations and precise, repetitive tasks, they have difficulty doing some things that are easily mastered by small children – such as stacking blocks and sensing objects in space.

Moreover, most restaurants serve a range of menu items, each of which might need numerous specialized forms of automation. Sit-down restaurants have additional tasks that are hard to automate, including setting and clearing tables, refilling coffee cups and answering questions about what’s on the menu.

Burger King (BKW) attempted a potentially sweeping automation overhaul in the 1980s. It designed machines to take orders; broil, assemble and package hamburgers; cook and portion French fries; and serve drinks. But new management came in and shelved the project.

It’s not clear why. Among the questions at the time was whether the machines would be a “maintenance nightmare,” but the system was never broadly tested, recalled Nelson Marchioli, who had a long career at Burger King before moving on to executive roles at El Pollo Loco and Denny’s.

“It’s nothing that money and time can’t fix, but how much time and money do you want to invest?” Marchioli said.

Maintenance of automated systems can be costly and, when they break down, bring operations to a screeching halt, alienating customers, restaurant operators said.

In other industries, such as car plants, breakdowns can be costly, but delays do not immediately frustrate consumers, in the way a late pizza angers a hungry family.

Thomas Willis, an industrial engineer who was part of Burger King’s project, said many restaurant operators still don’t have the appetite for the kind of investment risks such efforts require.

“The fear of walking away from what works already is huge,” he said. But Silicon Valley is nurturing an appetite for risk and experimentation in the kitchen.

Momentum Machines has built a device to make gourmet burgers “with no human interaction” and city permit data show it plans to open a restaurant in San Francisco.

Zume Pizza, a Silicon Valley delivery start-up that has raised $5.7 million in venture capital, said robots will be building and baking pies by themselves within six months.

Already, a robot named Pepe squirts tomato sauce onto the dough, and it is spread by another called Marta. After people add cheese and toppings, robot Bruno gently moves the pizza from a conveyor belt to an oven.

Co-founder Julia Collins said one of Zume’s biggest challenges is maintaining the perseverance it takes to overcome technological difficulties. It took months, for instance, to get Marta to spread the tomato sauce with enough precision to keep it from splashing it off the pizza.

Zume’s first robot workforce cost $3 million to develop, and the company believes it will be able to start new locations for between $750,000 and $1 million. Once fully automated, Collins predicted, the pizzeria’s labor costs will be about 14 percent of revenue, about half the competition.

Domino’s Pizza (DPZ) CEO Patrick Doyle said the worldwide chain won’t embrace the Zume model any time soon. At $250,000 to $300,000, setting up a Domino’s location is a fraction of Zume’s estimated launch costs. And, he said, customers like seeing people in the kitchen.

“I don’t know that people want their food out of a machine,” Doyle said. “There is magic in a hand-crafted pizza.”

With states and municipalities moving to raise wages, restaurant owners and their suppliers may be more inclined to invest in automation, said Juan Martinez, principal of Profitality, an industrial engineering consulting firm for restaurants. But single-task robots may not be a better option than workers, he said.

“It is not ‘if you build it, they will come,’ since the return on investment is not there yet,” Martinez said. And Johnny Rockets keeps a grill chef visible to customers, even though its high-end burger cookers do most of the work.

The Multi-Billion Dollar Robotics Market Is About to Boom

Most of the movement toward technology in restaurants has been at the front end. Eatsa, an updated automat, offers its quinoa bowls at outlets that have largely eliminated front-of-the-restaurant staff. Customers order on tablets and pick up their food minutes later from small, frosted glass cubicles.

Several chains are using kiosks and other technology that allow orders to be placed more rapidly and efficiently. Such systems can pay off in two or three years, according to an analysis by Cornerstone Capital Group analyst Mike Shavel.

But the changes have not eliminated jobs; rather, they have shifted them away from counters and into kitchens and delivery, operators said. Digital ordering puts more pressure on the kitchen and delivery staffs, said Panera CEO Ron Shaich.

“You better be able to deliver that food,” he said.