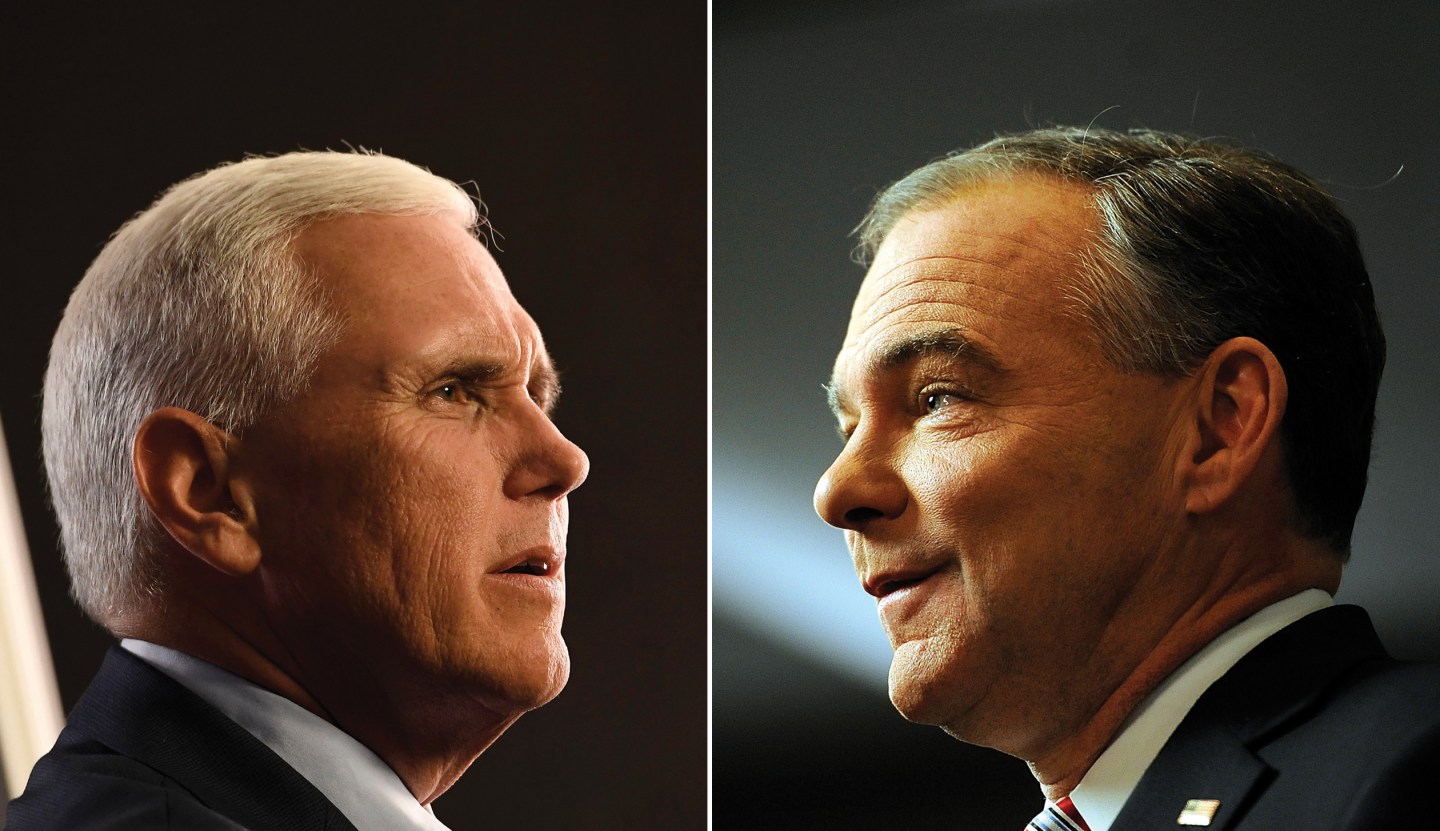 The first debate of 2016’s general election was a made-for-TV blockbuster that drew a record audience. Absent a dramatic and out-of-character meltdown, the running mates’ clash, scheduled for Tuesday night in rural Virginia, is going to be anything but.

In fact, almost half of Americans can’t even tell you the names of the dutiful vice-presidential hopefuls. If they keep doing their jobs, that won’t change and the focus of the evening will stay on Hillary Clinton and Donald Trump. As in a restaurant, you’ll remember the boldest element on the plate, not the side dish. They are the mashed potato, the steamed broccoli, the plain rice.

After all, the first rule of VP nominees is that they don’t overshadow the top of the presidential ticket. Big wattage VP picks are generally a drag. (Just ask John McCain about his choice of Sarah Palin in 2008.) So far, this year’s pair has accomplished the task of flying low with aplomb, especially since the nominees this year are two of the most famous people in America.

In fact, these candidates are doing such a good job of going unnoticed that we will be able to preview this debate without mentioning their names until the very last paragraph, and it won’t affect this story at all.

Why? Because VP debates generally don’t matter. They’re auditions to become constitutional understudies in a role that one of FDR’s Vice Presidents described as not worth a warm bucket of spit.

With the notable exception of Lloyd Bentsen’s famous “you’re no Jack Kennedy” retort against Dan Quayle during 1988’s VP debate, there have been seldom moments that break through the noise of the general election. Even then, the loser of that memorable jab went on to serve four years as George W. Bush’s Vice President. Bentsen went back to chairing the powerful Senate Finance Committee—no harm done to either.

Strategists for both camps this year see a common goal. Do no damage. Give no voter a reason to cast a ballot against the presidential nominee you support. Minimize any differences with your running mate—even when there are serious ones on policy and personality alike. Survive 90 minutes of live TV and get back on the trail focused on keeping the parties’ bases engaged.

Such skills won prime consideration when Clinton was picking her No. 2. She explicitly did not want to look up from one of her briefing books to see a voter on TV expressing regret that Clinton was in the VP slot instead of the other way around. (Hence, no Elizabeth Warren.) There’s about as much chance of that happening these days as anyone out-Trumping Trump.

It’s the same for Trump. He has own corps of supporters who can go on TV to make the case for his candidacy. Former New York City Mayor Rudy Giuliani has shown no shame in making the case for Trump. New Jersey Governor Chris Christie and Senator Jeff Sessions of Alabama are also firmly in the mind-set to justify Trump’s unconventional behavior. Trump’s running mate doesn’t need to lend his voice to that discordant chorus, and has on occasion released statements that as gingerly as possible made clear he would have said things differently. For instance, where Trump refused to release his taxes, his could-be governing partner released his.

Clinton’s running mate, meanwhile, is 8-0 in elections. He is a skilled evader of awkward moments, courtesy of his aw-shucks dad-isms. He’s an affable Senator from Virginia, a former governor of his state, an ex-Democratic National Committee chairman and civil rights lawyer. But he knows how to make the attack with a smile, all but insulating him from charges of playing dirty as he flashes his charm.

He’ll be facing someone who is equally no slouch. A former member of House Republicans’ leadership team and a former talk-radio host, the governor of Indiana knows how to communicate with his party’s conservative and Evangelical bases. He has been practicing for months, with Wisconsin Governor Scott Walker, a pal, standing in for the man Clinton’s campaign is sending to spar.

In some ways, the debate is an ultimate version of network-TV greenroom: two supporters of presidential nominees debating the records and ideas of people who couldn’t be there, with the public largely indifferent to the experiences of those who are on stage. Both campaigns would be happy if talk never turned to the running mates at all. Clinton’s team is dreading questions about how Catholicism runs counter to capital punishment. Trump’s team likewise would be fine if moderator Elaine Quijano of CBS News never cites the Bible in a question.

Democratic running mate Tim Kaine and his GOP counterpart, Mike Pence, are slated to have their sole debate on the campus of Longwood University, starting at 9 p.m. If they’re successful, they will not change the results of an ABC News poll that found 41% of Americans can’t identify Pence as Trump’s VP pick, and the 46% can’t link Kaine with Clinton.