What Most Moderators Do Wrong During Presidential Debates 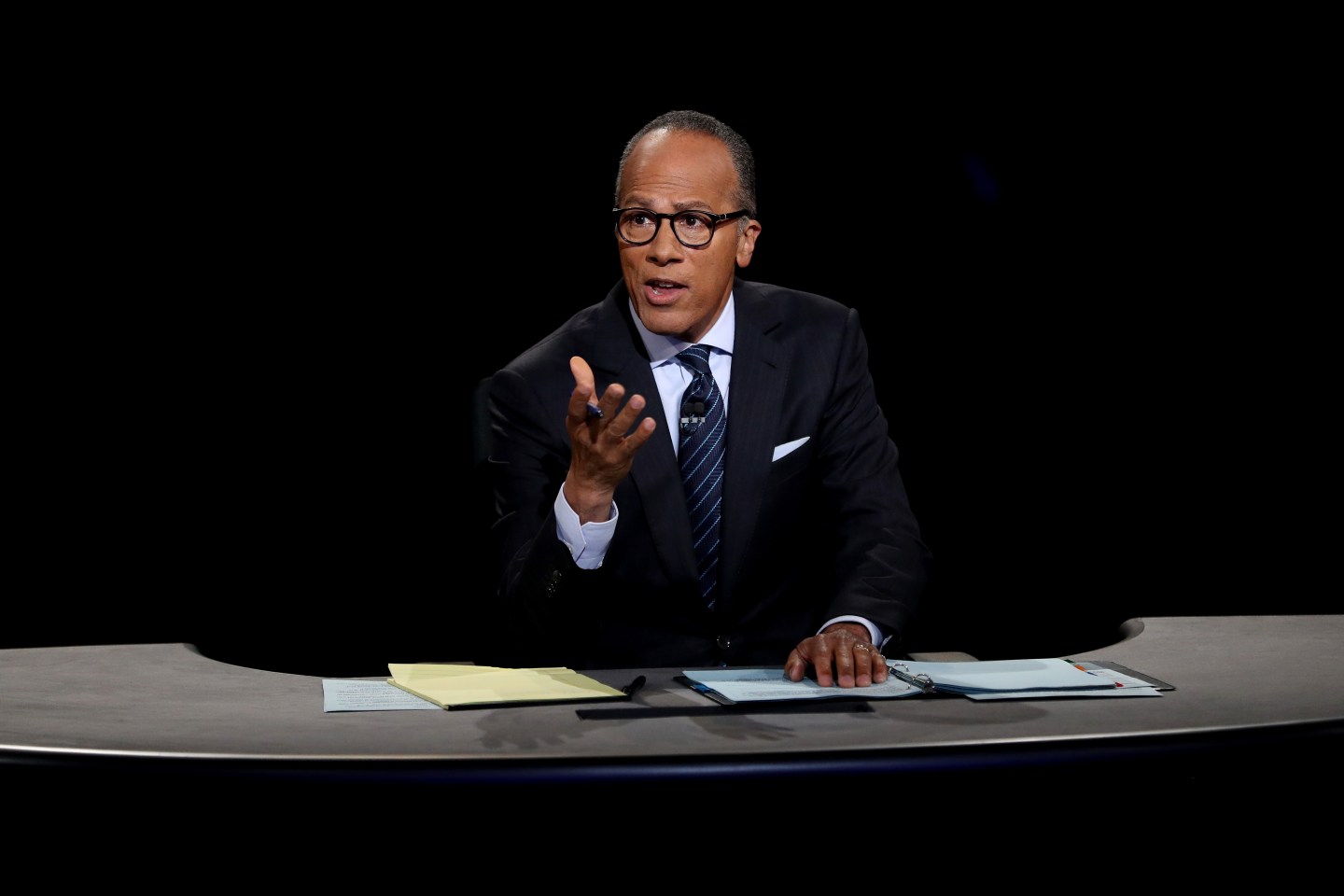 Hillary Clinton won the first presidential debate, but the victory was tainted by the partisanship of NBC Nightly News anchor Lester Holt. Not only was he biased in his questioning as debate moderator (tough follow-up questions for Donald Trump and not Clinton), but he aggressively fact-checked Trump (on his confusion over stop-and-frisk policy and claimed opposition to the Iraq War) over Clinton (nothing about her flip-flopping on the Trans-Pacific Partnership). This begs the question: Should moderators serve as fact-checkers in presidential debates, even if they do so even-handedly?

Tonight’s vice-presidential debate promises to be more focused on policy questions, since both of the candidates are knowledgeable Washington insiders well-versed in the issues on the contemporary political agenda. Elaine Quijano of CBS News will serve as moderator, and hopefully she will take note of the criticism that has been directed at Holt for fact-checking. If debate moderators succumb to the temptation to fact-check, their interventions in the debates automatically become part of the storyline. And when the media become part of the story, they cannot impartially tell the story.

Jim Lehrer and Bob Schieffer, the most experienced presidential debate moderators of our day (having moderated 15 presidential debates between the two of them), have insisted that moderators should remain in the background and allow the candidates to be in the foreground. Schieffer explicitly stated during a panel discussion last month at Notre Dame, “…The chief fact-checker should be the candidates themselves.” When candidates make a controversial claim, the moderator should allow opponent to respond, but, Schieffer added, “You’re not a judge.” If the opposing candidate fails to correct the record, there are plenty of bloggers and political fact-checking websites that will step in to dispute questionable claims. But most of these sites are heavily partisan.

Lehrer and Schieffer’s wisdom is evident in the controversy over Trump’s claim that he opposed the war in Iraq even before the war started. Probably in reaction to the criticism Matt Lauer received for allowing Trump to make this claim without challenge in the town-hall forum last month, Holt categorically stated, “You had supported the war in Iraq before the invasion,” and, when Trump denied Holt’s claim, Holt emphatically interjected, “The record shows otherwise.” The record is far less clear than Holt suggested. Trump’s 2002 interview with radio host Howard Stern was focused on New York real estate and the rebound from September 11th. Stern digressed to ask if Trump supported the war, and Trump said, “Yeah, I guess so.” This hardly qualifies as a considered judgement, and Trump can rightfully respond that commentators are distorting the remark by taking it out of context and ignoring the qualifier.

Trump, on the other hand, is overstating his subsequent opposition to the war expressed on Your World With Neil Cavuto two months before the war began. In the context of a discussion about whether President Bush should be spending more time focused on the economy or on Iraq, Trump equivocated. He conjectured that “people are much more focused on the economy.” Is Trump suggesting presidents should listen to the people? He then laments the lack of decisiveness: “Either do it or don’t do it.” This sphinx-like admonition to act is followed by qualifiers Trump likes to highlight: “Perhaps he shouldn’t be doing it yet. And perhaps we should be waiting for the United Nations.” The most defensible conclusion is that Trump hadn’t given the Iraq war much thought before it began, and his subsequent opposition when the war bogged down would hardly qualify as insightful judgment. Most Americans had become disenchanted with the war at this point.

Candy Crowley famously fact-checked Mitt Romney in one of the Obama-Romney debates in 2012. Her correction of Romney’s claim that President Obama had not linked the Benghazi attack to terrorism was questionable. Obama had mentioned terrorism in a Rose Garden speech, but it was not clear whether this was a reference to 9/11 or to Benghazi. As Crowley herself conceded, the attempt by Obama Administration officials to focus on a spontaneous demonstration in response to an Internet video rather than terrorism made Romney’s claim “right in the main.” Crowley became part of the story rather than allowing the candidates to be the focus of attention.

If Holt hoped his fact-checking of Trump would swing the election to Clinton, he underestimated the risk that his easily perceived bias would play into Trump’s narrative that the system is rigged against him, potentially creating a backlash in Trump’s favor. Fox’s Chris Wallace, who will moderate the third presidential debate, has it right: “I do not believe it is my job to be a truth squad. It’s up to the other person to catch them on that.”