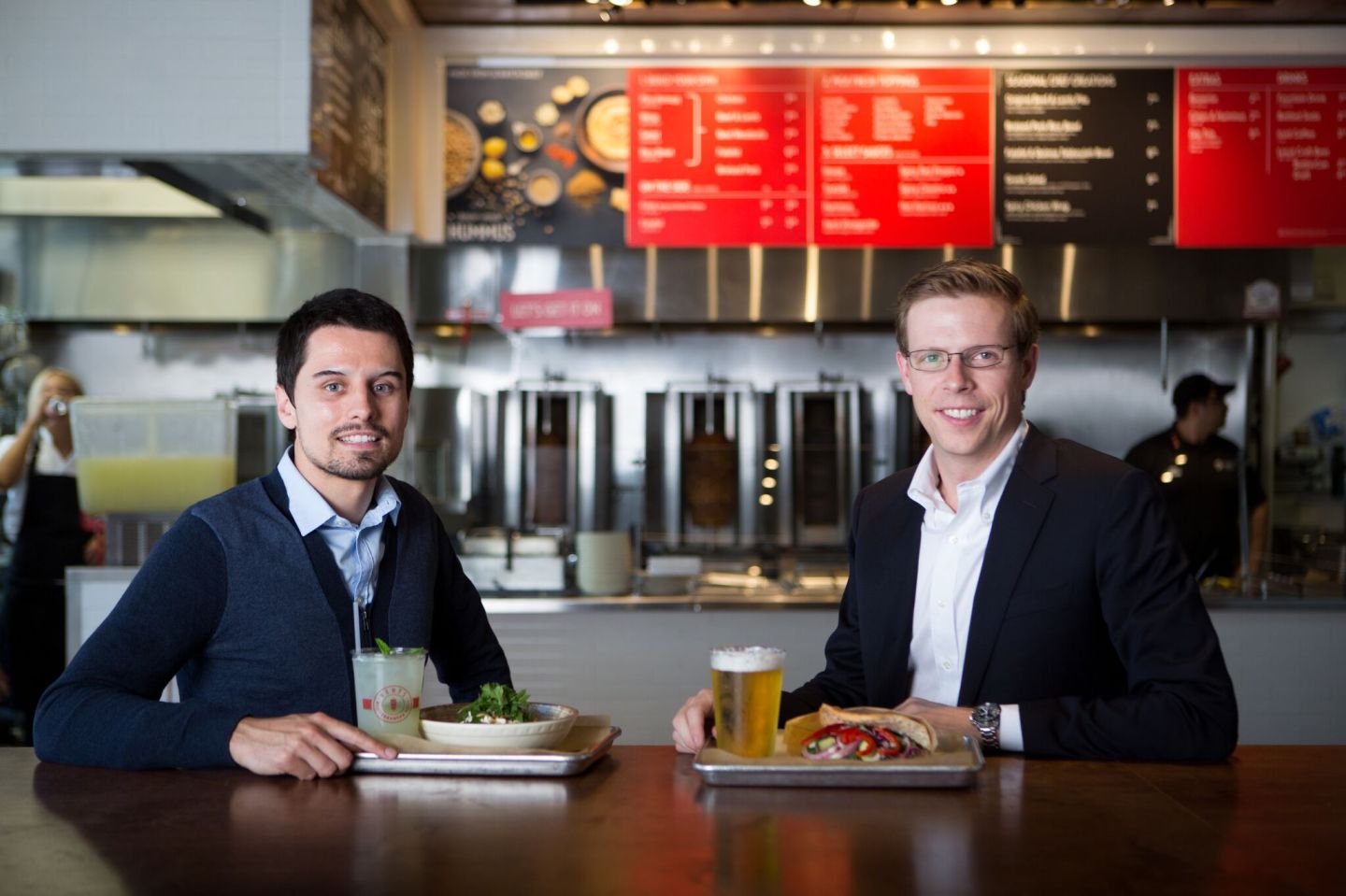 In just five short years, freshly minted MBA students Michael Heyne and Dominik Stein took their fast casual Mediterranean food concept and turned it into something of a local phenomenon, growing from a single restaurant in Austin to 33 across Texas.

Now the duo wants to go national, with plans to roll out four VERTS Mediterranean Grill locations on the East Coast in the next six months. Their goal is to have 250 restaurants in the next three years.

“We could see what Chipotle did for Mexican food,” says Stein. “In our opinion, the next fast casual food category is Mediterranean.” VERTS’ menu features items like hummus, falafel, pita, grilled meats and vegetables, and a variety of sauces that customers choose and assemble. Meals are generally less than $10.

In many ways, the timing is perfect. Fast casual dining has surged in recent years, with consumers seeking high quality meals without the full-service price tag. Full-service restaurant sales grew a scant 1% to $207 billion in 2015 compared to 2014, according to research company Euromonitor. Fast casual sales increased 9% to $24 billion over the same period.

But expanding any restaurant beyond its home turf comes with challenges. For one, the U.S. is an enormous market, and what has worked well in Texas may not succeed as well in other regions.

“They will need really qualified people who know logistics and strategy and how to run a restaurant in the New York region,” says Bruce Bachenheimer, clinical professor of management and director of the Entrepreneurship Lab at Pace University.

VERTS is also moving into some of the country’s most vibrant and competitive food scenes: Boston, New York City, and Philadelphia. It will face pressure from local eateries as well as Zoes Kitchen, which went public in 2014 and has more than 190 locations, and Naf Naf Grill, a Chicago-based Mediterranean chain that is also expanding to the East coast in coming months.

The company’s founders don’t plan to be taken unaware. They’ve hired Mark Rivera, a former director of operations for the greater Boston area at Chipotle, to direct operations of the new stores. They’ve also hired two area managers and a marketing team for the East Coast.

Stein and Heyne, who are 31 and 29 respectively, have streamlined operations so that their restaurant concept is easy to reproduce. For example, they use a single, national food supplier, and have broken down their supply needs–including produce, plastic utensils, and dry food to just 130 items. Similarly, their shop interiors are all warm woods, stainless steel, and sport an open-kitchen design.

Still, while its aesthetic may feel like that of Shake Shack or Chipotle, VERTS faces another challenge — a market that doesn’t yet crave Mediterranean the way it craves other foods, says Euromonitor analyst Elizabeth Friend.

“The most successful segments in fast casual–better burgers, better pizza, better burritos–have benefited from mining an existing pool of demand,” she says. “With something like Mediterranean, you’re not only launching a new and unfamiliar brand, you’re also asking your customers to start a new habit.”

Related: The Former CEO of Clif Bar Is Trying to Get America to Drink Herbs

Yet VERTS (short for “Vertskepap” — or “kebab” in English) has proven itself in Texas and its growth has been remarkable. Founded in 2011, the chain has 500 employees and revenues between $33 million and $50 million. And it’s hardly short on ambition. Heyne and Stein, who met as undergrads in Germany before attending the University of Texas-Austin together in 2010, have raised $35 million in funding from a network of family and friends, which gives them a runway through 2017. But they are seeking between $50 million and $100 million more from private investors to continue their expansion process. If all goes well, they would also like to tap a broader base of financing by going public within the next five years.

“We have thoroughly researched each market and are very well prepared,” Stein says.