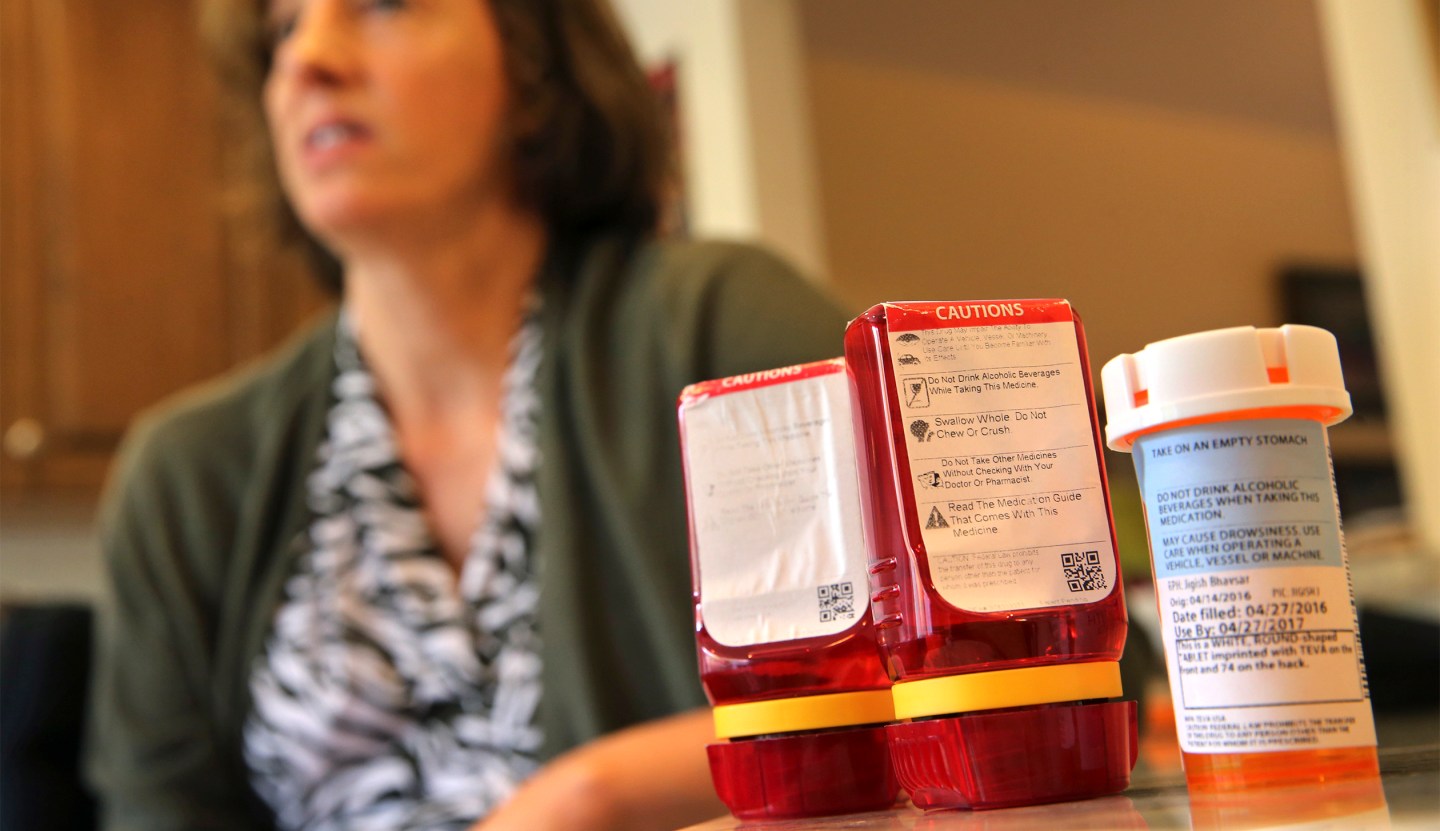 In this Sunday, Sept. 18, 2016, photo, Shelley Ewalt sits in her home, in Princeton, N.J., near an amber-colored CVS pharmacy prescription bottle, right, and two uniquely designed red ones from Target. After CVS took over operation of Target's drugstores earlier this year, distraught customers have been asking the drugstore chain to bring back the retailer’s red prescription bottles, which came with color-coded rings, labeling on the top and prescription information that was easier to read. Ewalt tweeted to the drugstore chain, asking if there was any chance they might return to the design of the Target bottles, which she found easier to open. (AP Photo/Mel Evans)
Photograph by Mel Evans — AP Photo

Despite a plea from longtime customers of Target’s pharmacies, CVS isn’t bringing back the retailer’s iconic red prescription bottles.

Target’s pill bottles used to come with color-coded rings around the neck, and featured labeling on the top of the bottle and easy-to-read prescription information, the Associated Press reports. But CVS began doing away with the red bottles when it opened its first pharmacies within Target stores in February, a result of Target selling its 1,672 pharmacies to the drugstore chain for $1.9 billion in a deal that closed last December.

Instead, CVS switched the red bottles for the white-capped, orange-colored vials that are standard at most pharmacies.

“This is really inconvenient and irritating,” Vivian Ruth Sawyer, a Target-turned-CVS (CVS) customer told the AP.

Sawyer even fished through the trash to find her old Target bottles after receiving the white-capped bottle. Even though they don’t have the correct expiration dates, she said she prefers them because they make it easier to tell her prescriptions apart.

And Sawyer is not alone in her dissatisfaction. Some customers are so angered by the change that they’ve taken to Twitter (TWTR) with the hashtag #redbottlesrock to vent.

Hey @Target and @CVS_Extra, #redbottlesrock… They made all the difference managing my mess. Why fix something that was revolutionary? 👎

A CVS spokesperson told the AP that the company stopped using Target’s (TGT) pill bottles because it’s both easier and more cost-efficient to use the same bottles at all of its 9,600 locations across the U.S.

But after customer visits to Target’s in-store pharmacies dropped in the second quarter, there was question if the sales decline had to do with a change in prescription bottles, according to the AP. CVS said the two were not related.

But Marshal Cohen, chief retail analyst with market researcher NPD Group, isn’t so sure. He said the change up may have led some customers to fill their prescriptions elsewhere, which contributed to the second-quarter drop.

“When you start tinkering with things … the consumer kind of gets a little testy,” he told the AP.

Fortune has reached out to CVS for comment and will update the story if the company responds.