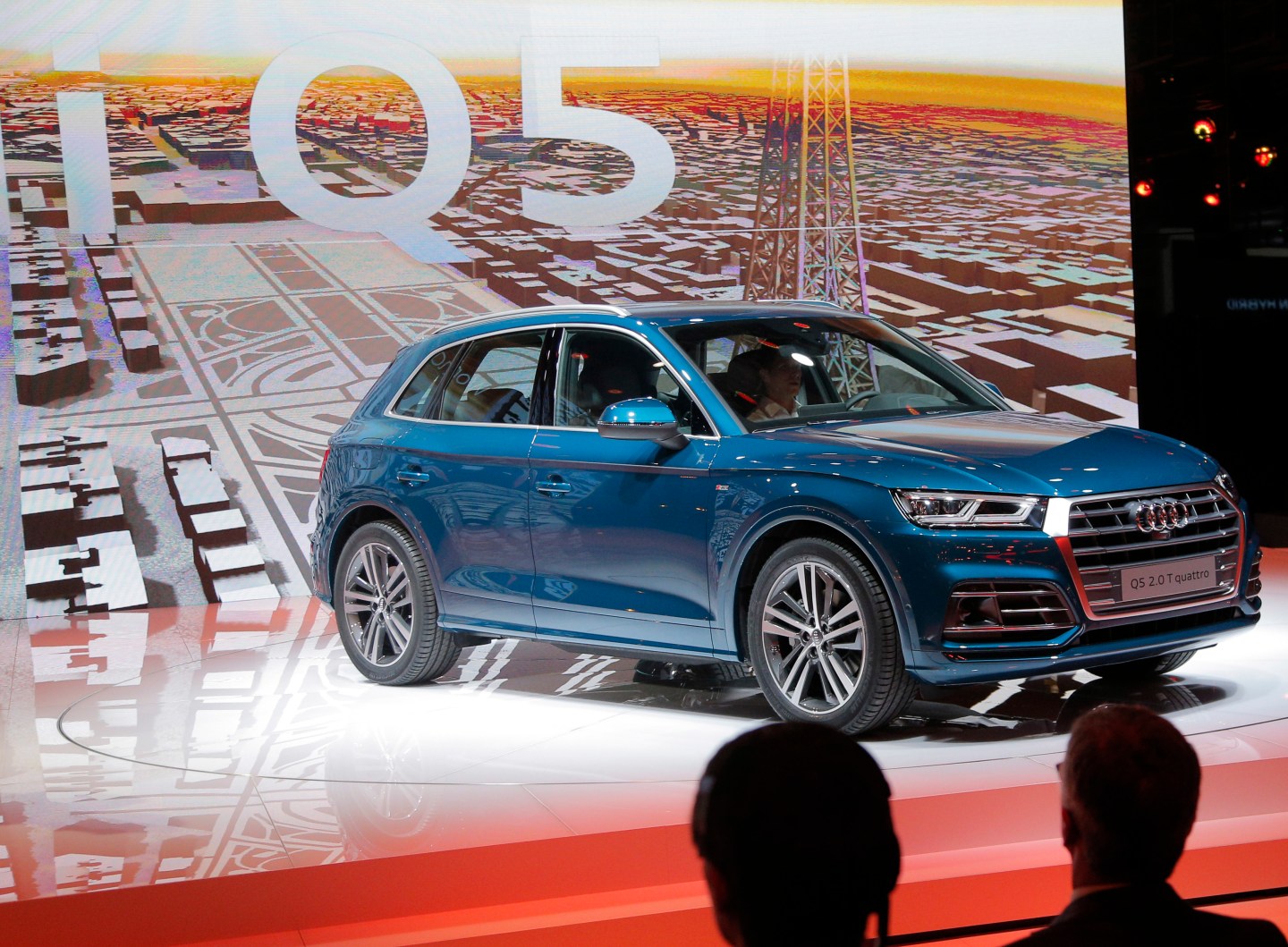 Members of the press view the Audi Q5 2.0 T quattro at the Paris Auto Show in Paris, France, Thursday, Sept. 29, 2016. Many major automakers are finding the Paris auto show, held in a city whose mayor wants to ban diesels to reduce pollution, as a fine place to show off new zero-emission electric cars. (AP Photo/Michel Euler)
Michel Euler — AP

Audi has introduced its second-generation Q5, a luxury crossover vehicle that’s bigger and more powerful than its predecessor—but 200 pounds lighter.

The new Q5, unveiled on Thursday at the Paris Motor Show, will go on sale in Europe in early 2017. It largely resembles the first generation, but there are some notable exceptions, especially when it comes to the technology inside.

Audi increased the wheelbase and added to the vehicle’s length, which creates a little more legroom in the back seat. The new Q5 has sleek LED lights and the front grille has been tweaked to give it a flattened hexagon shape. The Q5 will be sold in 14 different exterior colors and five packages, which will impact the overall appearance.

The new Q5 has up to 30 driver assistance systems such as a traffic jam assist that can handle some of the steering work in slow-moving traffic and a predictive efficiency assistant that helps save fuel. Drivers can also activate a personal route assist function that taps into the navigation system to learn common routes and destinations, and then uses this information to suggest the best route for the next trip—even while navigation is inactive.

Owners can opt to replace the traditional dashboards gauges with a configurable and customized screen called a “virtual cockpit,” which is a fully digital instrument cluster, not the knobs and buttons found in older cars.

Take a Look at What The New Audi R8 Can Do:

Perhaps one of the more interesting technology features is how the car is using data. Data collected by sensors and cameras on the vehicle is then shared on a larger network using the Internet. Audi models will eventually be interconnected so they can exchange information on traffic conditions in real-time via the cellular phone network.

This enables what Audi calls “swarm intelligence,” essentially sharing a lot of complex information with a large group.

To protect privacy, the sensor data that’s collected will be sent in anonymized form to the digital mapping service HERE, the former Nokia unit that was acquired by Audi, BMW, and Daimler earlier this year.

All of this data can be used to improve the driving experience. For example, by pulling information across a network, traffic patterns will be shown in real-time, alerting drivers of congestion, accidents, and other hazards, Audi CEO Rupert Stadler said during a press conference at the Paris Motor Show. Soon, drivers will also be alerted to vacant parking spaces, Stadler added.

“Using this big data material, we can design new services by early 2017,” he said, noting that the A4, A5, and Q7 will also have this capability.

The Audi Q5 will be manufactured at a new plant in Mexico, which will officially open on Friday. The vehicle will initially premiere in Europe with five different engine options, four of them turbocharged direct injection diesels. (Most of these engine options probably won’t come to the U.S.)