Why You Can’t Buy the $2 Million Ferrari Aperta, Even If You Had the Cash 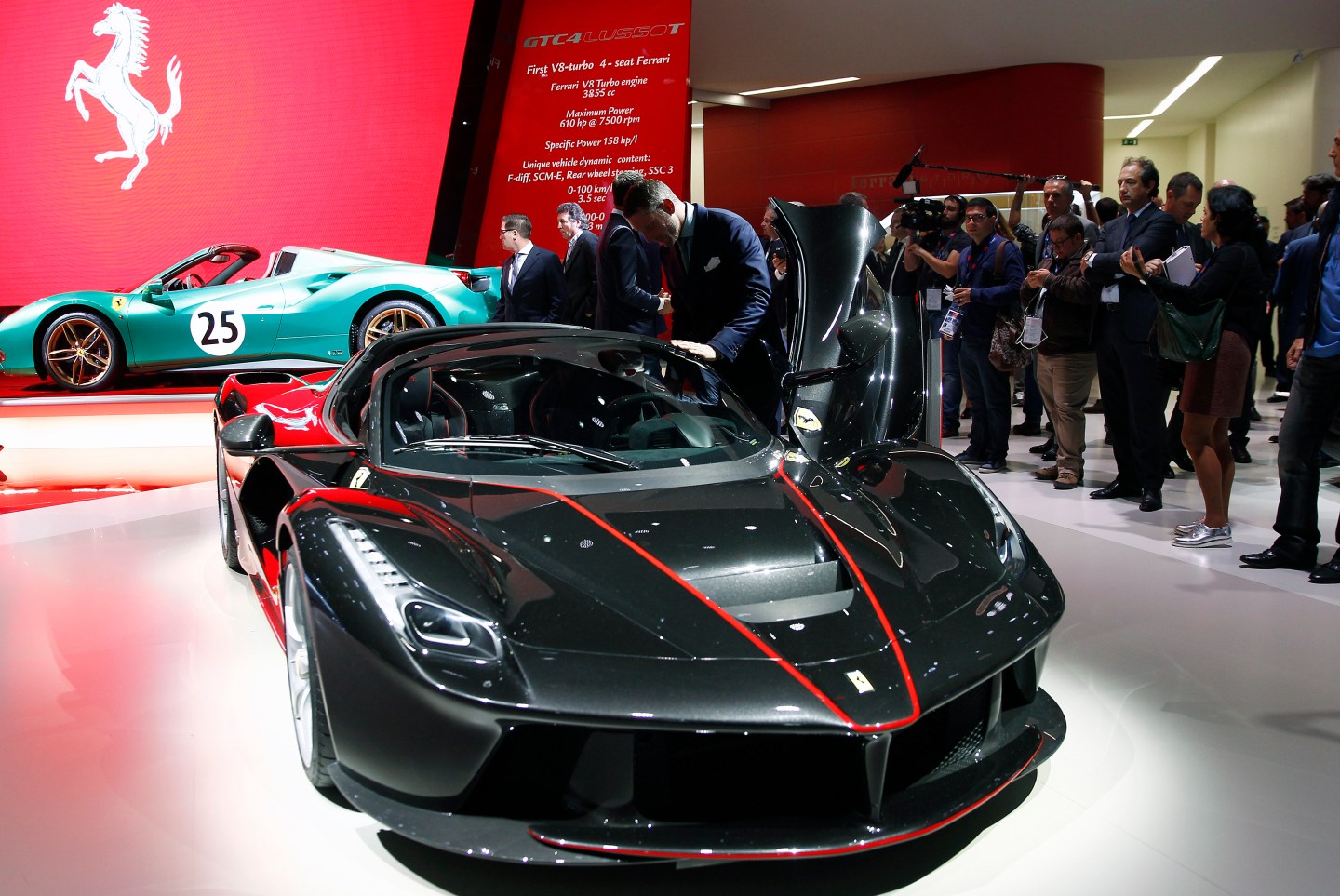 PARIS, FRANCE - SEPTEMBER 29: The new LaFerrari Aperta automobile produced by Ferrari sits on display during the first press day of the Paris Motor Show on September 29, 2016, in Paris, France. The Paris Motor Show will showcase the latest models from the auto industry's leading manufacturers at the Paris Expo exhibition centre. (Photo by Chesnot/Getty Images)
Chesnot/Getty Images

Ferrari’s 1.86 million euro ($2 million) LaFerrari Aperta sports car had sold out before its official debut at the Paris Motor Show on Thursday, a sign the super rich still clamor for any special edition of the luxury brand.

Only 200 of the hybrid convertible sports cars will be produced for carefully selected clients, with an additional nine made for use by the company during its 70th anniversary celebrations next year.

“For us a limited edition is a way to reward our most dedicated clients,” sales and marketing head Enrico Galliera said at Thursday’s launch. “These 200 customers bought the car without having seen it; they went with faith.”

What It Takes to Design an Even Better Bugatti:

Some analysts estimate they could make up around 10 percent of Ferrari’s revenues this year.

“They’re hugely important to the mystique of the brand and their ability to continue to generate the sales that they need and that the markets demands of them now,” said Ian Fletcher, an analyst at IHS Automotive.

Getting invited to purchase one of the vehicles is not easy, and being one of the growing number of super rich is not enough.

Interested parties have to show they are passionate about Ferrari—by owning several of the $250,000 regular models and maybe another special one already—and by cultivating a relationship with the brand, for example by attending Ferrari events. The company also makes sure nobody buys them just to make a quick buck by selling them on.

Demand for the LaFerrari Aperta was big, Ferrari said, and celebrity chef Gordon Ramsay was one of the lucky ones.

Rejection as a potential owner of one of the vehicles, whose value can appreciate greatly over time, can be so frustrating it led one Ferrari collector to sue the company for the “reputational injury” it had caused him, court documents showed.

The case was dismissed this week.

The ability to sell highly priced models such as the LaFerrari Aperta highlights the brand’s strength.

But Ferrari has been under pressure to justify its luxury multiples and to show it can expand the brand beyond exotic cars to fuel growth, with its stock price hovering below its October IPO price of $52 and hitting a low of $32 in February. It stood at $50.55 at 1809 GMT on Thursday.

Seeking to raise overall shipments to 9,000 by 2019 from around 7,700 last year by making the brand appeal to a larger demographic, Ferrari presented the GTC4Lusso T on Thursday, a four-seater with a smaller V8 turbo engine “specifically designed to be driven every day.”

However, Evercore ISI analyst George Galliers questioned whether Ferrari may become too reliant on special editions.

“We have questions as to whether Ferrari can continue to produce and sell special models in such volumes and at materially higher price points year in/year out for the indefinite future,” he said.

Ferrari’s Galliera argues the company does not make special editions for the sake of having them. Traditionally they are brought out every six or seven years or earlier if there are some technological enhancements to showcase, as was the case with the F12 tdf that was unveiled last year.

Then there are special occasions to mark. Ferrari said it would produce 350 tailor-made vehicles, all inspired by iconic models from the carmaker’s past, again to celebrate its 70 years of existence. All of those have already been claimed as well.

Afficionados like Joe Adams, president of the 6,300-member Ferrari Club of America, said special editions are a winning formula for Ferrari, with the exclusive club of buyers being “something a lot of people vie for.”

“As long as they keep selling out before they bring the car to the market, it’s going to work,” he said.